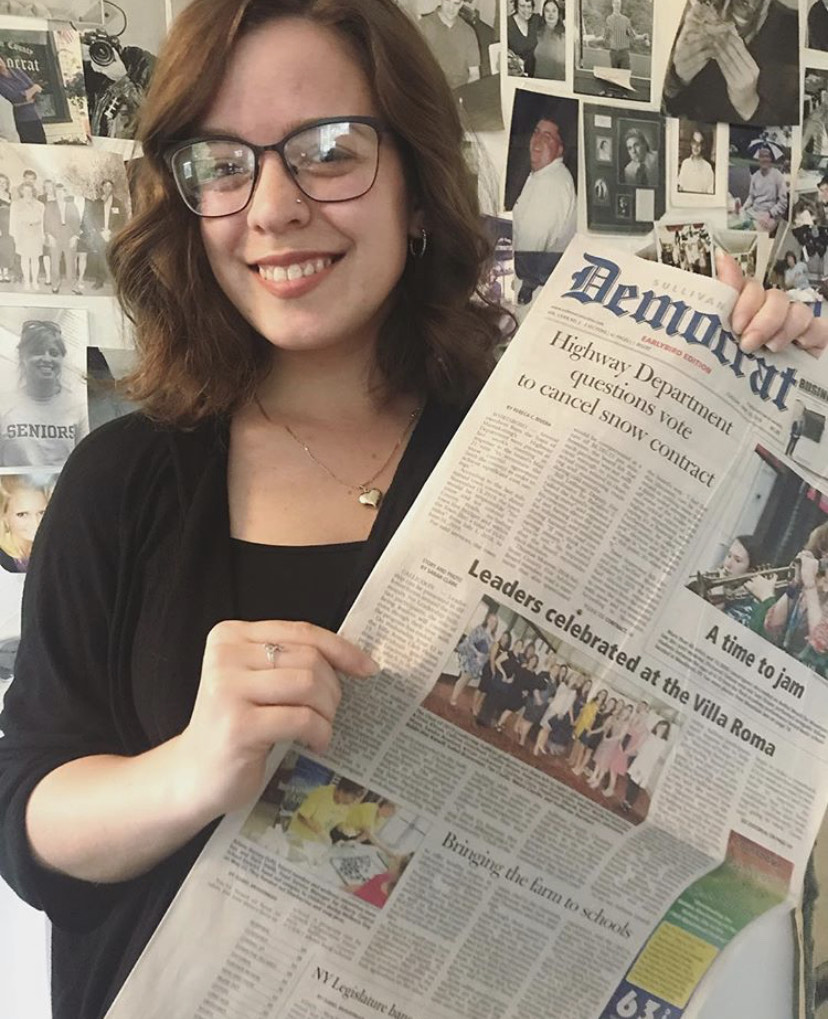 Sarah Clark ’21 holing up the Sullivan Country Democrat with her byline on A1.

Even with New York State on pause, life goes on. Sarah Clark ‘21 recently discovered this when she covered a breaking-news story for the Sullivan County Democrat on April 13. Clark, a communications major with a concentration in journalism, was at home when she heard the call from her parents’ police scanner. A five-alarm fire was ripping through the second story of a Main Street business in Jeffersonville, New York. Clark, who freelances for the Sullivan County Democrat, hopped into action after texting her editor, but not without first grabbing hand sanitizer and a face mask.

When she arrived at the scene, she noticed people crowding the sidewalk, watching the fire burn. Then, there was the crew of firefighters from five different departments, working to control the blaze. Although it took quite a balancing act, Clark managed to get the facts, take a picture, and produce an A1-worthy story for the Democrat — all while trying to keep a safe distance.

“I think a lot about how I can do my job — and safely — given our circumstances,” Clark said. “It’s difficult.”

Clark has been working for the Sullivan County Democrat since the summer of 2019, when she landed an internship through the New York Press Association. After completing a six-week internship there, she was hired as a freelancer.

This was not Clark’s first fire-related story, or even front-pager. Ever since Clark transferred to Saint Rose in her sophomore year, she has hit the ground running, reporting for The Chronicle, Saint Rose’s student-run paper. Clark is now the news editor for The Chronicle and a student member of the Society of Professional Journalists (SPJ) as well as the Public Relations Student Society of America (PRSSA).

Saint Rose journalism courses combined with these clubs and activities have prepared her for journalism in the real world.

“If I hadn’t written for The Chronicle, I wouldn’t have been able to apply for the internship,” Clark said. “I had a good amount of writing samples, so that was nice.”

Clark secured the internship after attending a New York Press Association conference in the Spring semester of her sophomore year. The Communications department helped cover her expenses. While at the conference, she introduced herself to the editor of the Sullivan County Democrat, a publication familiar to Clark. She has lived in this county for 15 years and was able to make meaningful conversation.

She must have made an impression. After meeting Clark at the conference, the editor of the Sullivan County Democrat emailed her about the internship opportunity and asked her to apply.

“If the department hadn’t funded it [the conference], I wouldn’t have known about the internship,” she said.

Clark is now finishing up her junior year from home (like the rest of her classmates) and covers stories for the Democrat when needed. Working at the Democrat has given her a deeper appreciation for the area where she has lived for most of her life. She has learned about the culture, the people, and services the county offers, providing her with a newfound respect for the area.

“Having the ability to see different sides of the community and getting to know people within it is rewarding,” Clark said.

Social-distancing measures put in place for New York State have made things complicated for her as a reporter. Her favorite thing to cover is events, which don’t exist at this time.

Learning from home has not been an easy adjustment, either. After Saint Rose switched to online learning for the rest of the semester due to COVID-19-related precautions, Clark was worried her grades would suffer. She was also worried about her mental health. Clark said she has anxiety and depression, and the hustle and bustle of student life at Saint Rose was a welcome distraction.

“Although not a healthy way of coping, I would channel my energy into my work and going to events and hanging out with friends,” Clark said. “I am having to find new ways to cope.”

Clark uses poetry writing as an emotional outlet, but the pandemic is raising her stress level, taking a toll on her creativity. She also has reached out to the counseling services available through Saint Rose for help. She noted her professors were accommodating and understanding through these uncertain times. And, since she is a communications major, she’s comfortable using technology to communicate ideas and complete assignments.

She looks forward to the days she is back on campus, covering events for The Chronicle and hanging out with friends. But for now, Clark is doing her best, keeping up with school work and freelancing for the Democrat when news is made.

“I’m taking things one day at a time,” she said.