by Michael Aurrichio on March 9, 2015 in All About Saint Rose · 0 Comments

On February 23rd of 2015, I participated in an event called, “Mr. and Mrs. Relay”. I’m a huge believer in coming to college and breaking out of your comfort zone, so when I was asked, I immediately had an answer: yes.

To begin, prior to being asked to participate in Mr. & Mrs. Relay, I did not really know what it was. I’m just hanging out with my friends in my common room when I received a text from an unrecognized number.

I open up the text to read, “Hey Mike, it’s Carly Weller!” I’m thinking to myself, I wonder what this is about… She asks me what I’m doing on Monday February 23rd from 6:45 p.m. – 9:00 p.m. and of course, I never know what I’m doing. Like I’ve heavily indicated, I’m always down to do new things and explore opportunities, so of course I’m free!

It turns out she was asking me if I was interested in this event that kicks off Relay For Life called Mr. & Mrs. Relay. Now, I won’t lie to you, my first thought was I am literally talent-less, what do I do for the talent portion? My second thought was I’ve hosted five events but haven’t been in one yet, plus this is a good cause, let’s do this.

From there, I received more information about the event and the more I learned about Relay, the more I wanted to become involved. Within the next few days, I was officially entered into this event.
For this event, there were three different sections. The first section was the introduction/formal portion. After that, there was a talent portion where the contestants would showcase a talent they possess. Finally, there was a question and answer section. Now, before I get into the actual event, I’m going to (hopefully quickly) walk you through the moments before the event, the “leading up to,” if you will.

I have never been so nervous for something, especially at Saint Rose. At one point, I was sitting in my Science 200 course and it randomly hit me how nervous I was. I was actually nervous to the point where I didn’t want to eat anything because this was all I could think about. I had been on stage by myself before, so why was I so nervous this time?

Walking to Saint Joe’s just added onto the nervousness. I walked in to see people setting up and getting ready for the night. Now, the nervousness is still there but there’s something else; excitement. Once I saw everyone, I was so excited to get started. I immediately found a familiar face, being Matt Ramirez. Matt’s energy was enough to get me even more excited than I already was.

Here it is, event time. It’s 7:00 p.m. and everyone is in their seat and it’s time to start. First, Matt walks across and they announce his fun facts and he exits the stage. Now it’s my turn.

“Up next is Mike Aurrichio. Mike plays ultimate frisbee for Saint Rose and is actually an ordained minister.” Quick side note: yeah, I am an ordained minister. As the host said my fact, I looked over to my friend Kathleen to see her laughing hysterically. In my head I’m thinking, okay something I wrote down had someone laughing, I’m going to be okay.

As every contestant walked across the stage, my heart just kept beating faster and faster. I knew the talent portion was up next. I knew I would be okay but BOOM the nerves were back. All three of the male contestants decided to merge their talents into a battle. Not just any battle, but a LIP SYNC BATTLE.

Each of us did the first two verses of two songs. For my two songs, I decided to go with “Thinking Out Loud” by Ed Sheeran and “Ghost” by Ella Henderson. Now, I like to think I did an okay job. Ed and Ella would have been proud. Matt and Dan both KILLED their songs. During my “performance” of Thinking Out Loud, I got to publicly embarrass one of my best friends by running off stage and singing to her. (Don’t worry, she still loves me) 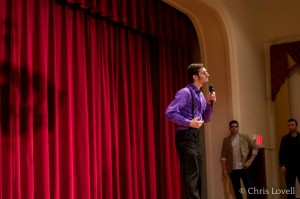 Me “singing” Thinking Out Loud. Props to Chris Lovell

I could now relax. All of the nerves were gone and I could sit back and watch all of the other talents. All I had left was the Q&A portion of the night. I must say, it was a great night and once again I was blown away with how talented everyone was.

Although I did not win, this was easily a top three night. I had an absolute blast, my friends were there, this was for a great cause. Kudos to Matt Ramirez and Allyssa Rose for earning the title of Mr. & Mrs. Relay!

I also need to shout-out/congratulate a lot of people for this successful night. Once again, congratulations to Matt and Allyssa. Huge shout-out to Jacob Barkman, Caitlin Connelly, Colleges Against Cancer, Relay For Life, Chris Lovell, Carly Weller, Meghan Mallon, and everyone else involved! This was easily one of my favorite nights and it was for an even better cause. Thank you.