At 7p .m. the seats of St. Joseph Hall were filled with excited students to see the first ever Saint Rose Got Talent. I myself was eager to join, but realizing that there would be an audience and judges to critique me, I decided to leave my singing to the choir.

The many braves students of the College displayed their unique talents of singing, rapping, dancing, stepping and even magic. If you weren’t there to see all the performers you truly missed out!

The hosts of the night were our very own resident assistants, Myles Clendenin and Amie Walter. Also Kathleen Gargan, another announce, kept the audience informed about an event the College has been apart of since 1985, Relay For Life. Did you know just this past year St. Rose raised $28,000 for the cause? This year the 6pm-6am event will be taking place April 26th on the green by your own students. So, make sure you support all the fundraising events on campus leading up to the event.

I must say the judges, Michael Alston, Kat Butera and Ryan Hapeman had a hard selection to choose from, all of the contestants were amazing, but there could only be three winners. So, the winners of the night were, drum roll please…………….IT’S A TIE for first place!! The third place winners were the Golden Nights Dance Club with their beautiful performance to a Chicago number. And now the moment you have been waiting for… The first place tied winners are THE GOLDEN NOTES and NICOLE DEMARCO! First place prize is a $50 gift certificate and an automatic placement into the Saint Rose Music Awards on November 30th.

I give a round of applause to all the contestants and Student Events Board committee chair of Musical Entertainment, Samantha Bruer, for making this event such a success! Thank you to all the people who purchased food from the refreshment stand, all the proceeds are going to Relay For Life.

As Samantha Bruer stated, “I was astounded at the number of people we had come.  It just goes to show you how much amazing talent we have here at Saint Rose that there was a tie for first place, and the tie was a perfect score!  I can’t thank my committee enough for all of their hard work!  I hope that everyone learned a lot of Relay facts too and I’m so happy that we could help them raise money for April 26th event!”

The event was a hit! Stay tuned to another post by yours truly coming soon, salutations. 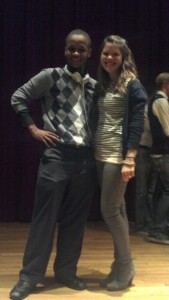