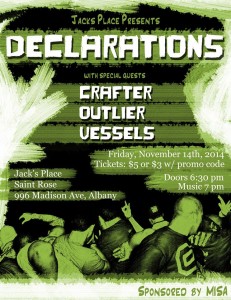 Jack’s Place was gettin’ rowdy on Friday, 11/14!  Our friendly little venue in the Hearst Center is probably most known for our monthly open mic nights and this year’s Rocktoberfest.  But this show was something new, something loud, something heavy.  This was one crazy night for hardcore at Saint Rose!

The show kicked off at 7 p.m. with a local group called Vessels. Drummer, Eric Murtaugh, is a music industry student here at Saint Rose, so it’s no wonder that he would work with other talented musicians to bring together this metal masterpiece!  I’ve seen them at Jack’s Place once before and, just like last time, they were fantastic.  They had a presence on stage that either blew you away or pulled you into the pit!  I only wish they had a CD at the show so I could listen to them again and again, but I guess I’ll just have to wait for the next one.  If you’re a die-hard fan of hardcore music, keep an eye out for Vessels!

While Vessels set the bar high, up next was the equally brilliant Outlier, and they weren’t about to let themselves fall short.  They hit that stage and kept every bit of the energy going strong; and with two Saint Rose music industry students in the band, bassist Drew Waldron and guitarist Steven Miele, how could we expect anything less?  I think it was their set was when I got sent flying from the pit into the wall and couldn’t hold my arm over my head when I got home.  But hey, it’s not a hardcore show if you don’t leave with a few black ‘n’ blue spots!  Unfortunately, Outlier also lacked music and merch for sale, but they do have a few songs on YouTube!

Up next we had Crafter.  I’ll be honest, I didn’t much care for their sound.  However, I will not discredit their musical talent.  They have a very good understanding of music and have been working very hard to make something of their own.  It’s just that everyone has their own musical preferences and their sound simply didn’t fit mine.  That isn’t to say that they didn’t fit the tastes of others at the show!  The crowd they gathered were having an absolute blast!  It just goes to show how varied the sound of any genre can be.

Finally, we have Declarations.  These guys were fantastic!  They managed to incorporate more clean vocals while also staying as heavy as the opening acts!  As a vocalist who sings and screams, I feel a strong appreciation for a balance between both vocal styles and an understanding of the struggles of switching between them while performing.  But when the band really knows what they’re doing, they bring it; Declarations definitely brought it!  No punches were pulled in the pit for their set!  It was just the right way to end the show that night.

I know this story wasn’t very in depth.  I wish I could have talked more about everything but there were two key factors in my way: 1) keeping this post at about 600 words, and 2) having an absolute blast at the show!  This is my scene.  This is my sound.  I could have sat on the sidelines and studied the performance but the point of going to shows like this is to have fun!  We’re college students and these events are for all of us.  So next time you go to an on-campus event, whether it’s a Jack’s Place show, a free movie night, or a charity benefit dinner, remember that it’s a part of YOUR college experience and be sure to enjoy yourself!