by Sam Crocker on August 6, 2012 in The College of Saint Rose

Recently I had my final prom to say goodbye to my school friends. Whilst I was chilling outside with my school colleagues and gazing over a picturesque British countryside, it struck me how my British schooling must be very different to the majority of my Saint Rose classmates. In this blog I’m going to try and highlight some of the differences and similarities of high school (or as we call it secondary school) in the UK and the US. This might also be useful for education students who are interested in the school systems of different countries.

Overall in the UK we have 12 years of compulsory schooling, starting at the age of 4. This is split between what we call primary (translated as Elementary School) and secondary school. Whilst we are one of the most heavily tested nations during our schooling in the world, the largest and most important tests come at the end of school in what we call ‘GCSEs’. Some of these tests are compulsory for all students in England (such as English, Maths and Science) and others are elective depending on what sort of school you go to (for instance my school was a ‘specialist school’ in Computing) or which subjects you choose to study.

After taking the GCSEs at 16, Brits are allowed to leave school or carry on at ‘Sixth Form’ or ‘College’ (not the same as US college) for another 2 years. Many who leave school early will go straight into work, start an apprenticeship (similar to a paid internship) or join the armed forces. Those who choose to carry on their education pretty much have a free choice what subjects they choose to study. For instance, I stayed at my school’s Sixth Form to study Politics, Economics, Psychology, Physics and Critical Thinking. Moreover in the second year of study students will typically only study three subjects (for me it was Politics, Economics and Psychology). Once again there are big tests at the end of these two years which will decide whether you make it to university or not.

The majority of those who attend Sixth Form or College will then apply to go to university to study a subject of their choice. In the UK, university courses typically last 3 years and students will only study one subject throughout their 3 years. Fees for university are around £9000 (about $14000) before housing and living expenses per year. Whilst this sounds cheap compared to college in the States, very few people benefit from any sort of financial aid so most people end up coming out of university with big loans to pay off.

School and university sport is far less funded or celebrated in the UK than it is in the US. I have a friend who plays for the top soccer university in the UK and, bearing in mind soccer is the most popular sport in the UK, he typically gets a crowd of around 500. He is an England youth player and even he doesn’t receive any kind of scholarship funding for attending his university. Secondary school sport, while contested is very limited. I played for many of my school teams but we very rarely had a practice. Most sports in the UK have an ‘out of school’ club system that is better funded and better coached.

Many schools will organise events throughout the year both within school (Christmas Fayres, Quiz Nights, Charity Fundraisers etc) and out of school. I was one of the leading members of my school’s Model United Nations society which gave me the opportunity to go on two MUN exchange trips to Huntington Beach, California. I have also been on a ski trip to Austria, a soccer tour to Barcelona, Spain and last year I was lucky enough to spend a month jungle trekking, mountain climbing and community helping in Borneo.

Finally in recent years many British schools have begun to adopt an American style prom to the end of their education. It was recently quoted on the BBC that one in twelve British parents spend over £500 (about $750) on their child for prom! I leave you with some pictures from my proms, notice the old red ‘double-decker’ bus that I travelled to prom in! I hope all you guys have had as incredible a summer as I’ve had and you’re all looking forward to arriving back at Saint Rose in the next few weeks! 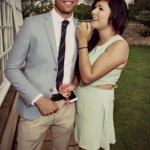 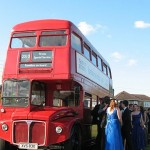 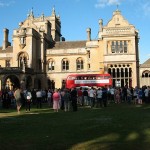