So, you wanna be a Music major?

Hello all! I hope that your weekend has treated you well!
For the next few weeks, I wanted to start doing some posts called “So, you wanna be a…” in which I explore the many different majors that Saint Rose has to offer.
As a science major, I am often secluded from everyone across the street in the Massry Center for the Arts and the CCIM building. I decided what better way to kick off this blog series then by learning more about the ever popular Music Industry major (Music Education is a huge one too) at Saint Rose.

Lloyd Smith and Dean DiMarzo are two well-known students of music at Saint Rose. Both are junior Music Industry majors, Lloyd has a concentration in voice while Dean concentrates on guitar. Their reasons for coming to Saint Rose were quite simple. “It was small” says Dean “and I wanted a close relationship with my professors.” Lloyd adds the  new facilities  being built were a big reason for his decision as well. “A lot of schools didn’t have this” he says while looking around Jack’s Place, a popular venue for students and local bands.

I also found out, while other schools have music industry, Saint Rose is one of the only schools that Dean looked at which requires a technology component to the major. Other schools have you choose one or the other.  So far during their time at Saint Rose, Dean successfully directed the entire 2010 holiday show ( which both he and Lloyd performed in), they have been in many performances, ran sound at shows and started their ensemble “Squidburger” which turned into a band outside of school (they performed at a battle of the band in Rochester, NY in August 2011). 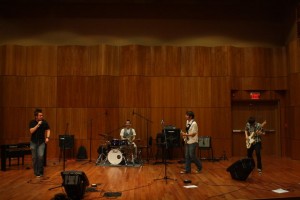 These guys are pretty busy. A glance inside their typical day would be something like – wake up in the morning, practice, go to class, sprint home to eat, sprint back for more classes (which last all day), go home practice and relax then repeat for the next however many weeks of school-

It will be worth it in the end when these guys graduate. Lloyd plans on going into the business side of music. He hopes to one day manage and sell products. He may even pick up a business minor along the way. Dean wants to find a steady income teaching (check out his YouTube for some intro guitar lessons and covers. There’s some seriously awesome stuff on there) and playing. He hopes to get a Masters in performance jazz one day.

When I asked these guys to give some advice to wannabe music majors they said, “Know your limits when it comes to everything.” Dean referring to the fact he signed up for 7, yes SEVEN, ensembles in the fall of his sophomore year. Think about that, 18 credits of school work on top of at least 24 hours of practice for ensembles… Yeah. That happened. They also mentioned that you need to make connections with your professors, which is true with any major. Professors will give you work and chances are, you may even be playing the gig with your professor. “What you get out of this place is what you put in. If you don’t do that you will get nothing. Absolutely nothing.” says Dean “Also, invest in a good down jacket. Albany is cold.” adds Lloyd.

I still have no idea what most of the music things mean but I do know one thing – these talented guys are definitely going to succeed in whatever they do. 🙂

So, do you want to be a music major? What majors do you want me to explore next for next week? Leave a comment below!!