Sports Journalism- Kinda Really Into It

When envisioning my college career I never pictured myself taking a sports journalism class never mind actually enjoying it. However… I am taking sports journalism and I am actually really kinda liking it. My new love for sports journalism just arose in the past 24 hours because of the news coverage I did last night and the field trip my class took this morning. 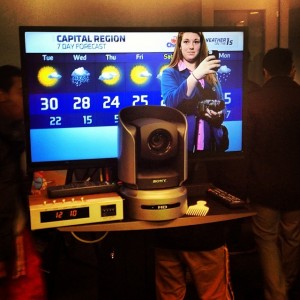 Casual “selfie” in front of the green screen that is used for the weather.

One of the three stories that those enrolled in the class must produce is a live/breaking news story that covers a local team. When picking what event I wanted to cover I pulled up the Albany High schedule and picked the most obscure high school sport I could find. In this case that sport was bowling  and I was in love with the idea of covering something that normally does not get any press. The Albany team plays at The Playdium and when I arrived I could tell it was going to be an interesting event. This is because the man working the desk tried to convince me that I was at the wrong place although I could see the Albany players already practicing behind him. I tried my hardest to not be confused but the man was so adamant about it being a racquet ball facility that I was tempted to walk away until the coach of the team intervened. From there it was smooth sailing as she had her team cooperate with me and even explained some of the rules. Thankfully I also brought two residents/friends (I am an RA remember) that grew up bowling to help explain exactly what was happening on the lanes. After a little while I felt at ease and took pictures of the team- although at one point I am sure the boy threw the ball purposeless close to my lens to mess me. The Albany team took the victory over Troy and the highlight of my day was interviewing the boy that had the highest score for his team. The way he beamed when simply stating that he “did great today” made almost getting hit with a bowling ball worth it.  For the coverage of my bowling adventure click here: http://blog.timesunion.com/pinehills/albany-bowls-their-way-to-victory/8279/.

Feeling official with my class at Time Warner Cable News

The second part of my sports adventure took place this morning as my sports journalism class went to visit Time Warner Cable News. The building fittingly used to be a bowling alley- one of the lanes is still visible in the lobby. While there we were able to explore the facility and were shown all the ins and outs of what happens in the course of the day. I loved being able to picture myself in that environment and it was especially fun to interact with the green screen used for the weather report. While there my task was to take pictures of the group while we were on tour of the facility and again I began to see myself as a professional. This time instead of being worried about being hit by bowling balls I was afraid to get in the way of an actual news person. Like at the bowling alley I eventually got the hang of it and was climbing between things to get a cool shot. Our adventure there was short but I never thought I would walk away from a field trip feeling like I belonged somewhere.

The past 24 hours reassured me that I picked the right major but have also made me question what exactly it is that I want to do with me degree. I once thought I would never think about being a sports journalist or anything of that nature but now I am thinking otherwise. I enjoyed how fast paced producing the story about bowling was and could absolutely picture myself working in a news room setting maybe even covering something like sports. Sports journalism just serves as another example of not to judge a book by its cover and hey, you just might like something you thought you would hate.