After 10 days of vacation and over 20 hours of travel, I can say with full certainty; I’m exhausted. Flights, bus rides and trains have gradually worn me down. Not to mention, my wallet is screaming for a well deserved break. However, I would do it over again in a heartbeat. I ventured to both Barcelona and Paris. I wanted to focus this blog on my Barcelona experience.

The weather was comforting, traveling from windy London. The sky was sunny with temperatures in the mid 60s. The scenery in Barcelona is beautiful. The ocean glistens with boats floating on its surface. Large green mountains stand luminously in the distant Spanish countryside. The natural aesthetic of Barcelona was stunning, La Rambla, a popular Spanish street, features various shops, restaurants and the world famous Mercat de Sant Josep de la Boqueria.  The food market features hundreds of vendors selling fresh produce, meats, cheeses and candy. The inexpensive prices for orange-mango juice and chocolate strawberry skewers make the destination a must. Locals and visitors alike gather daily in the market.  My friends and I spent time exploring the different food stands. After this feast, we climbed the hill on Park Gruell. This was a challenging feat, but admirable reward, as the view was amazing.

fellow Strose sophomore, Taylor Holliman, and myself at The Cathedral

la Sagrada Familia has been in development since 1882, over 133 years ago. The project was first started by architect Antoni Gaudi. It is expected to be completed between 2026-2028. The basilica is a monument, and main tourist attraction. The building is hard to describe, inside and out. Large pillars beam with Christian artwork. Spiral staircases rise hundreds of feet through spires, reaching a planned 560 feet.  It was absolutely breathtaking to walk into this massive passion project. The Cathedral of the Holy Cross and Saint Eulalia, or simply Barcelona Cathedral was constructed between the 13th and 15th centuries. The hall church features different side chapels devoted to Christ and Mary. The cathedral also contains the tomb of Raymond of Penyafort, multiple bishops. The Gothic style architecture is intriguing to look at. The exterior reminded me vaguely of Saint Patrick’s Cathedral in New York City. When we were in the Cathedral a man began to shout different slurs. He was then escorted outside, where he proceed to sit on the church steps and “preach.” He spoke of how Jews, Muslims and Catholics are all bad people because his church was closed down. While what he was saying was wildly invalid and disrespectful, it was intriguing to watch the scene. 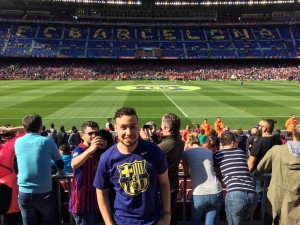 One of the highlights of my trip was watching Barcelona vs. Rayo Vallecano at Camp Nuo. The stadium, mentioned in a previous blog post, was equally as magnificent as anticipated. Over 90,000 people of all ages gathered to watch some of the world’s best futbol players, including Lionel Messi. Small children and elderly alike sported the Nike trademarked Messi jersey, occasionally with face makeup. The game was slow in the first half but quickly turned into a blowout in the second. The game ended 7-1 for Barcelona. The passionate fans, of all ethnic backgrounds, celebrated in the streets and in the bars and restaurants throughout the day. I paid admission to venture through to the Camp Nuo Museum before the game started. Precious metals and trophies were displayed in bright light. The museum highlighted the team’s history. The most moving part of the experience was to watch a video of the team’s triumphs and failures. The reactions of the devout fans and exhilarated players mixed with a carefully orchestrated score was a communication major’s dream. The brilliant video unintentionally displayed how sports unify people. Despite the differences that shape our individuality, we sport the same colors to root for our beloved teams. It was a wonderful day, and a great way to close out my Barcelona experience. 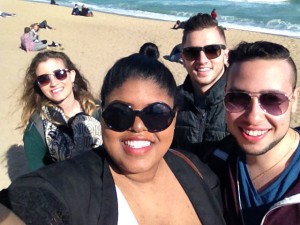