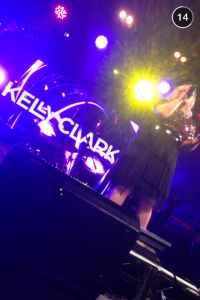 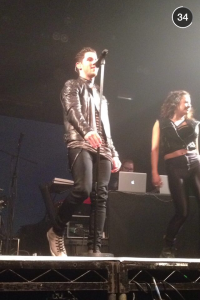 Valentine’s Day was surprisingly fun. There had been advertisements for weeks on social media of a joint concert with Kelly Clarkson and Nick Jonas on February 14th.  While most of the girls were excited to see Nick Jonas; I was ready to rock out to “Since U Been Gone.” I had already seen Clarkson in concert, she had opened up for Maroon 5 in a show I attended. She was a fantastic performer then. We were among the first people in line to get into the venue. Once we were allowed in, we made a mad dash for the stage. We then spent the next two and a half hours, pressed against the stage, waiting for the show to start. Various people took the opportunity to dance on the stage, attempting to entertain the crowd. This was good and well until the “dancers” began to spill drinks on the heads of the audience. That caused a stir in the audience, and those individuals were quickly taken off stage by security. The show was fantastic. Nick Jonas came up first at 1 a.m.  He performed songs from his debut album, including the hit song “Jealous” with all 2,500 people in attendance to back him up. He also sang a throwback, “S.O.S” from the Jonas Brother days.  I was impressed that he sang live and without auto tune. While I’m still not entirely convinced that he is the new Justin Timberlake; I’m willing to listen to his album. Clarkson on the other hand, performed like a bona fide rock star. She belted her extremely catchy powerpop hits such as “My Life Would Suck Without You,” “Stronger,” “Miss Independent,” “Because of You,” and yes, “Since U Been Gone.” She was playful and engaging with the crowd.  Her down to earth personality made the night even more memorable, as she was constantly making jokes. She also sighted that the late hour of 2 a.m. may have been causing her to act more loopy than usual. The night ended in confetti and balloons as she covered the Whitney Houston song ” Queen of the Night.” As an avid concert goer, I was taken aback by the small intimate setting of the venue. It was a perfect way to spend Valentines Day; and for only £ 10.

I’ll be seeing Logic, Tinashe, Nicki Minaj and Trey Songz over here. I love to get inside venues and just observe. My first NFL game was a 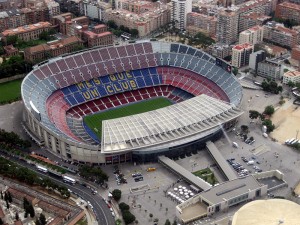 memorizing experience. At nine years old I saw the Jet’s play at what was Giants Stadium. I was in awe of the roaring crowd. Taking Venue Management with Professor Bernadette Speech was such a fun experience. Being able to brainstorm event ideas was a field day for myself, being a public relations major. I’ll be watching Barcelona play  Rayo Vallecano at Camp Nou in Spain, over spring break. The football (soccer) stadium has over 99,000 capacity, the largest stadium in Europe. I’m equally as excited to watch the game as I am for my on-point panoramas.

In my Social History of London class, we discussed Roman ampitheatres. The buildings would entertain the masses with gladiator battles, venationes (animal slayings) and even executions. On a field trip, the class was able to visit the remains of the Londinium amphitheatre. Re imaginations of the venue’s entertainment glowed from the black walls. My inner Hunger Games freak struggled to stay calm and silent. Although, I do realize that is fictitious. It’s almost impossible to think of a society truly entertained by murder. Ah the study of history!

I’ll be travelling to Berlin this weekend. An update will soon follow

← Good to know: On, and off, the front lines of Ebola research
Courtney’s College Curtain Call: The Breakdown →