StRose Strong and New Friends made Across the Pond

Studying abroad forces you to adapt. Your surroundings are foreign. You don’t know many. It’s like freshman year all over again. Thankfully, I had the comfort of being surrounded by eight of the best people Saint Rose has to offer.

Funny how it takes going to Europe to find friends in Albany. I knew Scott vaguely from working at Knightwire and being part of SAA. We traveled from JFK to Heathrow and back with each other. Whether it be going to the Harry Potter Studio Tour or just conversing over lunch, we always managed to have interesting conversation. Regarding his semester, Scott says””My semester got better and better as I met more people and formed strong bonds…Overall, I had an amazing time and I will miss the beautiful people that I met and grew close to.”

Omar lived next door to me. He studied in the European Business School at Regents. You could always count on him for playing great music, DJ-ing in the student bar. He also works as a retail marketing intern in Nike’s corporate office in the SoHo area of London. He’s a down to earth and motivated guy. Dominga and Melissa were two new friends I made abroad. It’s crazy that I came to know them in only four months. I feel like I’ve known them forever. They’re both beautiful and smart, with a lot to offer. Dominga was also ready to go to bat for me with this one girl who didn’t like me. But, that’s another story. Reflecting on her experience, Melissa says, “I am a firm believer everyone should study abroad…traveling without ‘adult supervision’ was nerve-wracking but liberating…I keep referring to the friends I made at Regents as ‘my friends back home.'” I’m beginning to develop the same problem.

I’m so glad that I met Jack and Mary Kate. While I was one of the younger ones over at Regents, they never made me feel as such. We ran through Piccadilly together multiple times; whether it be a Saint Patrick’s Day celebration, watching a hockey game at the casino, or another

night at O’ Neils. I remember at the casino Mary Kate was so welcoming to me. She called me over and we had great conversation. She’s such a  smart and genuine person. Jack and I were in Portugal at the same time. I thank him to this day for saving me from paying a 50 euro fine. Again, that’s another story. We became friends half way through the semester. I just wish we would have spoken more towards the beginning.  I really don’t think I could have had this experience without Taylor. When anything and everything was frustrating me, I could turn to her. Whenever she had a crisis at 4 a.m, she could turn to me. She’s one of the most compassionate individuals I’ve ever met. We’ve been friends since freshman year; and I intend to stay friends in the distant future. I felt weirdly protective of all the StRose students that went abroad. I think we all did. As we say, Albany runs deep,

I’m undoubtedly appreciative for the new friends I met abroad. Mike, who I’ve mentioned before in a past blog, is a senior

in college. It just so happens that we both live in Westchester and go to school in Albany. We traveled to Greece, Germany, Spain, Portugal and Holland together. He was the first “new” person I met. On the first day, Scott, Taylor and I were glued to each others hips. He was friendly in introducing himself. On another note, I’m not the most careful person. He’s saved me from a plethora of cars, buses, sometimes trains within the span of a few months. He always watched out for me; and felt like an older brother at times. Mike is the person who will never leave you, without making sure you’re alright. I’m glad we got to share this experience together.

Taylor, affectionately nicknamed “Glasses,” is a junior from Pittsburgh. We traveled to Greece, Spain and France together. Everyone at Regent’s says she’s one of the nicest people you will meet. Her laugh is contagious. We would go for walks through Regents Park together, laughing loudly and obnoxiously. Once we would both get going, it was hard to stop. She has a great disposition, always making positives out of any situation. The fact that she has Harry Potter tattoos makes her even that more great.  I also met her on the first day being in London. That night I went out to eat with her, Mike, and Taylor Holliman. We pondered on where we wanted to travel. It’s crazy to think we were able to make some of those dreams a reality.

Caitlin is a sophomore from New York. We first bonded over our history class and our love for Taylor Swift. We would 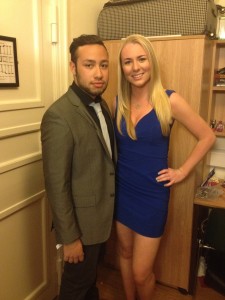 suffer through every museum field trip together. (The museums were cool, we were just lacking sleep.) Aside from “that one night”, we always had an amazing time going out in the city. She was always the first person to text me about plans.  At one point, we both lost our driver’s licences, and became “team passport.” Whether it be cruising through London, or barely staying awake on the tube to a museum, she was a great time.

There’s many other wonderful people who I’ve met. I just hope these plans of everyone driving to Saint Rose in the Fall for one weekend will come to fruition. Watch out Centennial. That’ll be one crazy weekend. I know I previously stated that this would be my last blog. However, to avoid a 3,000 word chore for my friends and family, I split my testament into two posts. The last one will come soon enough! 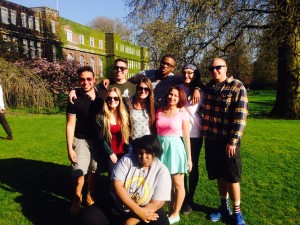 ← My First Year Experience at Saint Rose in a Nutshell
Good to know: The Pine Hills blog; no mere academic exercise for Saint Rose journalism students →