Welcome to the latest addition to the College of Saint Rose Blog, Knight Light! Knight Light is a weekly video made to let you know what events are coming up on campus. Share it with your friends on Facebook or Twitter! Take a look at the Saint Rose Calendar for other upcoming events! Feel free to comment below with your club/organization’s upcoming…

by Zak Barnett on October 23, 2014 in All About Saint Rose · 0 Comments
Friday, October 17, Mary Lambert and Howie Day were right here in the Massry Center for the Arts!  Their show was part of an annual performance series known as the Premiere Performances.  For those who don’t know, most of the concerts held in Massry (for groups such as the Masterworks Chorale, Wind Ensemble, Symphonic Band, etc.) are free and open to the public.  What’s different about Premiere Performances is that people need to buy a ticket to get in.  It’s just like a concert at any other venue, but right here on campus!

I had the privilege of working this event as an usher.  Salvatore Prizio, my boss and the presenter of every Premiere Performance, had me work backstage keeping people out that weren’t supposed to be there.  Because of my placement back there, I got to meet the performers before they even went on!

Howie Day was a really nice person.  You probably remember his single “Collide” from 2003, off of his debut album “Stop All the World Now.”  Regardless of having a big hit in his repertoire, he was very down-to-earth unlike many artists you hear about these days.  He was very open with everyone about how nervous he was, expressing that he felt he was “the college act of, like, 10 years ago.”  But he tucked away any nerves he had when he went on stage.  His performance was fantastic!  Of course, he played “Collide” but he had a full set full of songs from his apparently large selection.  I didn’t know any of Howie’s other music before the show, but now I wish I had!  His guitar skills were phenomenal and he is such a talented vocalist!  If you’ve only heard “Collide,” check out all of Howie Day’s music and let me know what you think in the comments! 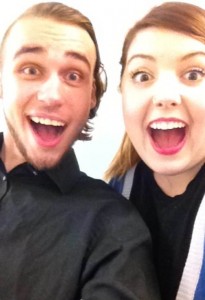 Mary Lambert and I after the show!

Mary Lambert was a total sweetheart!  She was so cheery and talkative with everyone backstage.  I would be too if I was headlining a tour promoting my debut album!  During her performance, Mary took several moments to talk to the audience about her many messages in her music.  The theme behind all that she said was simply being comfortable with who you are; a theme made very clear in her single “Secrets.”  On top of having this very positive message, she has quite the personality!  She had a hold on the crowd with her music, her message and several anecdotes and jokes here and there.  She got me laughing from backstage!  She also had a more somber side of her performance, particularly her piano and vocal cover of the classic song “Jessie’s Girl” by Rick Springfield.

After the show Mary had a meet-and-greet with several VIPs, then changed out of her nice concert dress into sweats which only added to her casual and friendly demeanor.  Then she thanked all of the staff who worked backstage and asked us all if we wanted pictures or autographs!  She was an amazing performer and a wonderful person, and I hope the College welcomes her back someday soon!