The family in DC!

Hope everybody had a great weekend!  If you remember from my earlier post, I mentioned that my family was coming to visit.  Well as of Thursday night, my mom, aunt, and three of my cousins were in DC with me!  So much happened in the past few days that I can’t even begin to write about everything in one post!  Basically everything that I have done in three weeks of being in DC, my family did in three days! Here’s a brief run through of our time together:

Thursday:  As soon as I got home from work, my family was just getting to their hotel.  I took the metro over and met everyone by the pool.  It was SO good to see them!  We went to dinner at an Asian Fusion place on the wharf that was within walking distance of the hotel.  It was great visiting and catching up on everything from home.  After dinner we spent some time walking around by the water and admiring all of the boats. 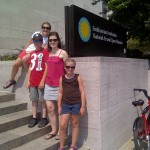 Outside the National Air and Space Museum

Friday:  We had tickets for the Hop-On-Hop-Off bus on Friday.  It was great because we could see all the sights from the upper deck of the tour bus. We walked to the Lincoln Memorial, the Vietnam Wall, and the Korean War Memorial.  Friday was actually the 62nd Anniversary of the Korean War and we got to hear the Koran Ambassador speak at a Full Honor Wreath Ceremony.  This was really special for me because both of my grandfathers served during the Korean War.  After the ceremony, we toured the Bureau of Engraving and Printing, the National Air and Space Museum, and the Museum of Natural History.  It was such a fun day, but tiring because we did a lot of walking and it was 100 degrees and humid outside!

The family in Dupont

Saturday:  We split up Saturday morning for a few hours.  I went back to dorm while they went out to Arlington Cemetary.  We met up for lunch at Johnny Rocket’s as soon as they were back from Arlington.  The kids were excited to show me their pictures and tell me all about the morning.  We walked to my dorm and went to Georgetown so they could see where I work and get a better idea about my life in DC.  Saturday afternoon, we took a boat cruise down the Potomac River.  It was the perfect day to be on the water because it was so hot out.  We went to Mass at the church that I’ve been going to down here (my cousin Madeline was disappointed it wasn’t the Cathedral where I fainted!).  After church, we met up with Megan for dinner in Dupont.  It worked out great that they got to meet Megan because they hear me talk about her a lot.

Sunday:  Sunday morning, my family went to the National Zoo and I went to Dupont for brunch with some friends.  Afterwards, we all met up at the hotel and spent time at the pool.  For dinner, we walked back to the wharf and had an excellent seafood buffet.  It was the perfect ending to a great weekend.

I could not have asked for a better time with my family!  Here are a few more pictures from the weekend: 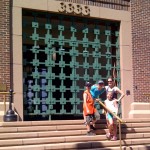 On the steps of the Legal Services Corporation 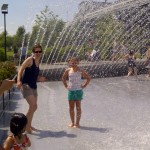 Running through the fountains in Georgetown 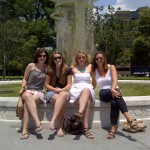 Enjoying the afternoon in Dupont after brunch