by Caroline Murray on October 27, 2020 in All About Saint Rose, The College of Saint Rose · 0 Comments 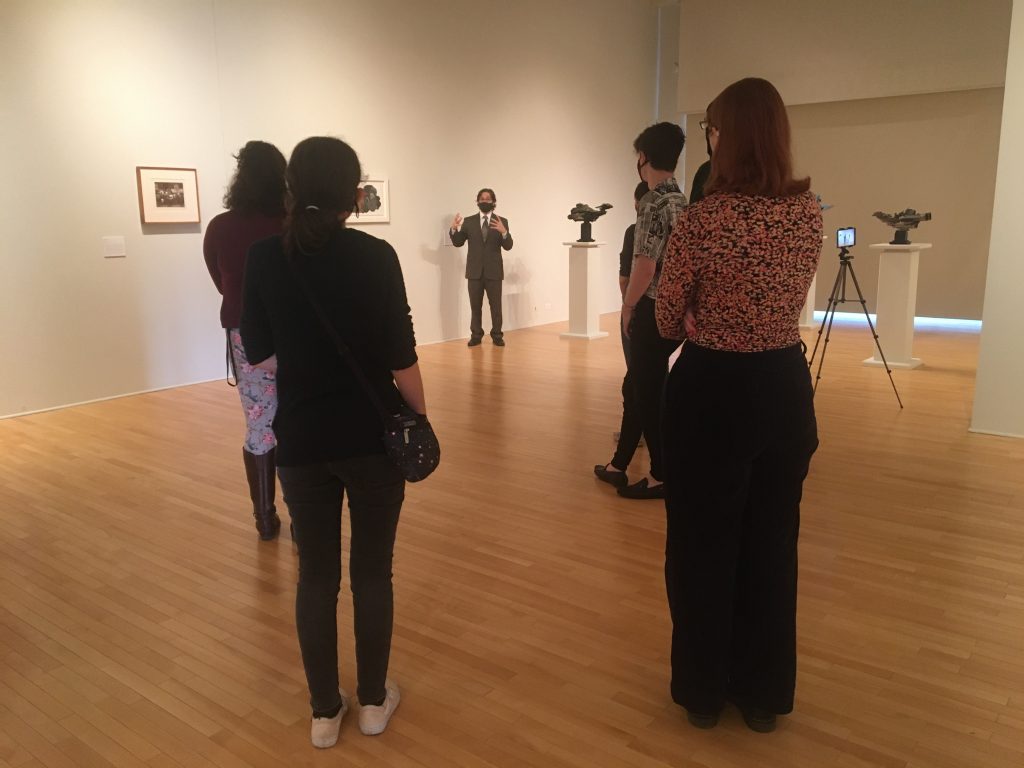 At the intersection of art and music, race and representation, and storytelling and listening was Dr. Jennifer Campbell’s elementary music methods class on Thursday, engaging with the latest exhibition at the Esther Massry Gallery.

Music education students gathered around the gallery as Campbell, an assistant professor of music education-elementary, gave detailed instructions to her students: listen to Dr. Robert R. Shane, associate professor of art history, navigate the artwork, and develop a lesson plan that honors these pieces.

Shane began his lecture by explaining the significance of the exhibition and how it serves to meet this critical moment in history. With a summer of racial reckoning that forced Americans to confront racism in their communities, including the Saint Rose community, Shane and his colleagues felt it was important to plan an exhibit that reflects “the past, present, and future for people of color during this crisis.”

What followed was the opening of “Engage: Artists in Visual Dialogue,” curated by Stephen J. Tyson, a Fulbright scholar and accomplished artist born and raised in New York City, who now resides in Saratoga. The exhibit includes artwork from the Harlem Art Collection and the University at Albany Fine Arts Collection, and features 22 artists of different backgrounds and ethnicities whose work spans 91 years.

“Tyson put together an exhibition we hope will facilitate dialogue here on campus. We are excited that you are here and engaging with the work,” Shane said.

Then, Shane directed the students’ attention to a photograph taken by Roger Cabán in 1974, which captures two men of color sitting next to two white women on a graffitied subway, unaware they are subjects of his work.

“There is a split here,” Shane explained while pointing to the black-and-white photograph. “The two people of color and the two white women — they occupy the same space, but they seem worlds apart. That tells us something about race relations in New York City.”

“He was part of a group of artists who did not see themselves represented in the New York City art world. Galleries or museums were not showing their work, so they decided to do it themselves at block parties in the Bronx or bodegas in Greenwich Village,” Shane said. “They did that until their movement gained force and recognition.”

The rest of the lecture continued in a similar vein, with Shane pointing out powerful pieces and explaining the stories behind each. On one side of the gallery, a sunset painting reminded students that people of color are not limited to creating artwork exclusively about their plight. On the other side, an Afrofuturism piece told a story about the beauty of natural black hair.

Then, students were asked to break out into groups: first to view various artwork on their own, and then to start brainstorming their lesson plans. 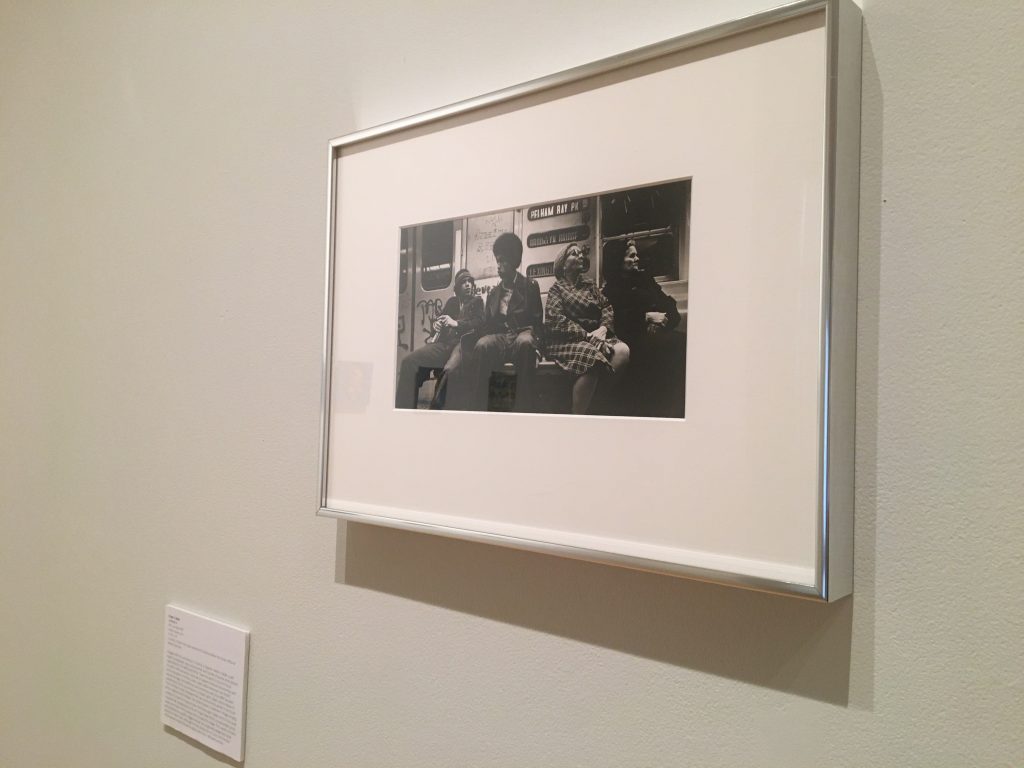 Campbell said that the idea for this collaboration with Esther Massry Gallery came about when she attended a panel discussion with three exhibiting artists — alumna Daesha Devon Harris ’02, Fern Logan, and Marcus Anderson — that Shane moderated.

Campbell thought it was fortuitous timing that the exhibit emphasized storytelling. Currently, her students are learning how to teach children how to tell stories through music.

This opportunity at the Esther Massry Gallery on Thursday was also a way to introduce her students to new voices and perspectives that might be missing from their formal education.

“In the curriculum that has been taught in music education for years and years and years, just like many disciplines, we are finding situations and components that continue systemic racism,” Campbell said. “But something that comes, that is wonderful and beautiful in the curriculum they are learning right now, is allowing children to observe and reflect and explore their environments and their communities and their worlds and create music from those leaping-off points.”

Students in Campbell’s elementary music methods class will eventually present their lesson plans to peers. On Thursday, they split up into small clusters and started the process of synthesizing complicated themes into an activity for K-6 elementary school children.

“By keeping a message short, keeping the music accessible, and keeping it user friendly, while instilling a new concept. So, bringing the unknown into the known — that is what we are going to be doing,” said Olivia Montagno ’22, a music education student.

Montagno said her number-one takeaway from the exhibit was the call to action that many of the pieces demanded of viewers.

“If something doesn’t change, then nothing will change,” Montagno said. “If we say that we acknowledge the problem of racism, but we don’t do anything about it, it is just performative. We will create a lesson plan to acknowledge that and encourage our students to back up what we say.”

Montagno’s group plans to create a composition — to include in their lesson plan — that uses clear and concise quotes from historically marginalized communities to help convey a powerful message to their future students.

Both Shane and Campbell understand the synergism in this collaboration. Not only are Saint Rose students immersing themselves in often-overlooked topics of race and representation, but future elementary students will someday benefit from this lesson, too.

“In addition to helping students tell stories, we are hoping this exhibition is a way to help people listen to stories,” Shane said. “The curator, Stephen J. Tyson, wants this to be a place where people slow down, stop, look, and listen…. We need to hear each others’ stories — the stories past and present — told here.”