Until Next Time: The Conclusion & Reflection of Studying Abroad 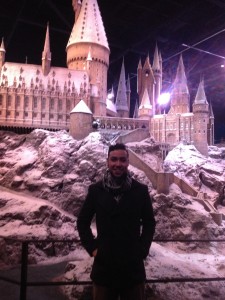 I can’t fathom that I’m writing this last entry from my bedroom in Hartsdale, New York instead of my dorm room across the pond. It’s like an old and distant part of my life has resumed. Today I drove in my car, went to my old elementary school church and ate dinner at my grandparents’ house. Was I even away for four months? Automatically, I’m now living in a summer lull; where days blend, routines are the same and excitement is minimal. I was elated to see family and friends. I really was. But,

anticipation is gone. There isn’t much to look forward to. It’s the bleak and blunt truth. The next two months will drag on.  I’ll go to the gym, read a couple of novels, watch some movies, and visit some friends. Starting July, I resume my summer camp job, for the fifth year in a row. I don’t mean to sound depressed, but I would give anything to return to London. I did a bit of research. It’s common to have these feelings when one returns from an abroad experience. It wears off in a week or so. I’m sure it will for me. Until then, I’ll be consoling myself by writing this blog, wrapping souvenirs for relatives, and my summer project– scrapbooking my experience. 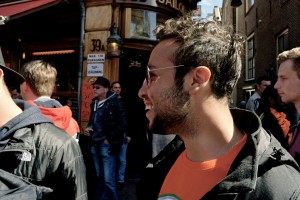 I  really am happy to be home. I can’t go too long without seeing my parents or my brother. But, living in Europe for four months has given me an intense feeling that’s almost indescribable. It’s a mixture of independence, significance and fulfillment, with a burning desire to continue exploration. I’ve learned so much, have made so many new friends. I don’t get emotional often (that’s a lie); but just 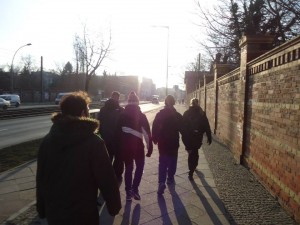 thinking back a week ago, I become immensely nostalgic. Two week ago, I was going to O’Neills for that last time with Mike, Taylor, Omar, Lindsey, Caitlin, Jack, Mary Kate, Eric, Irene, Aaron, and so many other fantastic people. We complained at first, that we were going to O’Neills, for the millionth time. But, as usual, we wound up having an amazing night. To think now that I’m back in New York, is crazy.

But, let’s get happier. It’s time to recap my experience with some added mushy gushy junk.

Regents University London may be the most beautiful campus I’ve ever visited. Regents Park has green trees, bright flowers, clear water and the

world’s most annoying yet majestic chirping birds and geese. The campus was one huge building. It was a struggle to

maneuver through it at first. Soon enough, it began to feel like second nature. After a 12-hour bus ride from a weekend excursion, laying eyes on the school was like a sigh of relief. I’m here. I’m home. Classes were difficult at times. Aren’t most? My four classes were Social History of London, Culture Communications, Media Literacy and British & American Musical Theatre. Each course contained a unique global survey of the world through their respective topics. In Social History, we traveled to museums, learning about the rich history behind London, one of the world’s greatest metropolises. In Culture Communications, we discussed cultural, racial and generational barriers. The course was interesting yet frustrating at times. There was more than one occasion when the class blew up in argument over hot-button issues such as racism and Ferguson. Despite the ignorance of others, it was interesting to see how others around the world view Americans and American issues. Media Literacy examined the British media, applying concepts and working on projects. In

Theatre, we saw musicals on The West End. It was definitely the most fun course. I wasn’t a theater fan before, but now I can tell you all about Gypsy. I stayed on top of my studies. However, I would never let 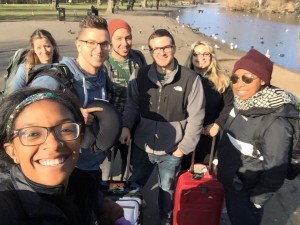 homework get in the way of my good time. If that meant waking up early to write an essay and go to the gym, then so be it. The weekdays became prime time in London, as students would travel during the weekends. I wanted to keep my nights free. However, in doing so, my morning schedule began to take a toll. There’s no way in God’s green Earth that I would wake up at 6 a.m. to run when falling asleep at 4. That became a little tricky to maneuver. The 2 hour breaks between class became invaluable for any forgotten or neglected studying. It was important to make sure all work was done before traveling the continent on the weekends. That way I could relax. 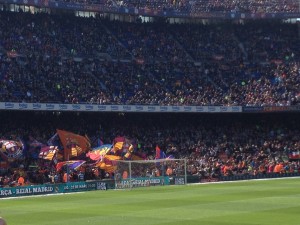 I traveled to Athens, Berlin, Barcelona, Paris, Brussels, Lisbon and Amsterdam. Reflecting back on all of these trips, my favorite by far was Lisbon. The city was stunning. The food was mouthwatering. The beach was amazing. The people I traveled with were great. It was also my shortest trip, which was a shame. In hindsight, it may have been more beneficial to stay another day. However, it’s impractical to think in terms of regrets.  You

went there. You experienced it. You move on. Spring break was by far the most entertaining and tiring 11 days of my life. One highlight was watching Barcleona vs Rayo Vallecano at Camp Nuo. Over 99,000 strong were in attendance for the soccer match. Mike and I had the best seats. The crowd was lively and passionate. It was the perfect ending to a weekend in Barcelona. In Paris, Taylor Holliman and I ventured into the Palace of Versailles. It was overwhelming. The artwork and architecture is astounding. We were in awe. We explored the castle and ate crepes in the gardens. It was one of the many, “Wow, I’m in Europe” moments.

I want anybody who is reading this to know that studying abroad is indeed worth it. It’s worth the hassle of getting in applications on time while balancing school. It’s worth the penny-pinching in the summer prior. It’s even worth the 18 credits that I have to take next semester. Studying abroad was a privilege, one that my parents have granted me. For that I’m the utmost grateful. If you’re even the slightest bit interested in going abroad, look into scholarships. Browse different programs. Research is key. Find what’s best for you and your wallet.

This whirlwind of a life-changing journey has changed me for the better. My heart is in London. My heart is in Lisbon. My awareness is spread evenly within the places I’ve ventured. I have made lifelong friends. I’ve become more open, feeling like a more globalized person. Studying abroad is a unique opportunity to explore yourself. Take the risk. Go in with no expectations. Get ready for this journey to significantly impact your life. I can truly say I’ve become a more well-rounded individual through traveling. I’ll hold the experiences and lessons learned abroad dearly. For that, I am extremely grateful. Studying abroad was simply, unforgettable.

Until next time, Great Britain 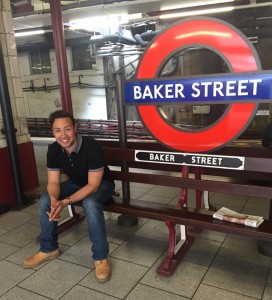 ← Saint Rose Experiences: I Am Adult
Good to know: 2015 Assembly intern’s unique perspective on upheaval in the Legislature →