For the past two spring breaks I have had somewhere to be and something to do. My sophmore year I volunteered in New Orleans with Saint Rose working to rebuild homes damaged or destroyed by Hurricane Katrina. Last year I went with the school on the conversion trip which meant I went to 5 cities in 5 days and met with accepted students to talk about my experience while away at college. This spring break, however, I realized that I had nothing to do and began thinking of ideas. I thought of typical college things like going to Cancun but that doesn’t fit my personality so then I romanticized the idea of just watching Netflix for nine days straight but thought that I better not. Instead I opted for heading down to visit my parents in Texas and bringing my friends along for the journey.

My friend from Saint Rose, Eric, and my friend from home, Ellen, were crazy enough to sign up for adventure. For Eric he would be given a rare glimpse into Carr family life while also experiencing what the Lone Star State has to offer. Ellen is used to my family and has visited Texas before so for her the meltdowns while ordering Sonic were to be expected. Aside from eating large amounts of the best fast food this side of the Mississippi, the three of us have adventured to San Antonio, the beaches in Galveston, and NASA which is only ten minutes from my parent’s house. 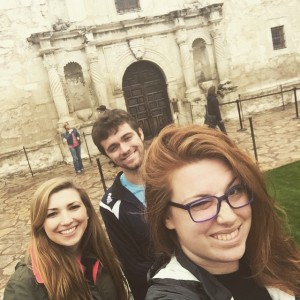 Eric, Ellen, and I visiting The Alamo- it was raining, a lot.

We first ventured to San Antonio because Eric wanted to go to Six Flags Fiesta but after we drove the four hours there and purchased our tickets we learned that a majority of the park was shut down. We decided to try and make the best of the day by riding every ride that was open but even that only took up a few hours. After the flop of Six Flags we then went to The Alamo to try and save the remainder of our day. After learning about The Alamo in history classes all throughout grade school I was expecting more than the tiny fort that was surrounded by tourist traps. I could just be bitter though because I got in trouble for taking a picture while inside of a building. Yes, the signs were prominent telling people not to take pictures but I forgot and the lady working made a big fuss but that is besides the point. After my public scolding at one of America’s most well known historic sites Eric and Ellen and I went to the River Walk. Out of the whole day I am almost sad to say this was the highlight. The River Walk is, as the name suggests, a pathway following a river but the cool thing is that the walkway is sunk beneath the city by about a floor. The walkway is lined with places to eat, shop, or even rent boats.

The beach day in Galveston was overshadowed by intense fog but anything is better than the 20 degree weather we left behind in New York. After walking out onto the rocks and while waiting for the fog to burn off we took a trolley tour of downtown Galveston which boosts a lot of history and interesting fun facts. I totally geeked out when our tour guide mentioned a house along our tour route that Bobby and JFK stayed in back in the 1960s. Once we were done with our tour we went to lunch and drove back to Houston before going to Texas Roadhouse later in the day. We chose Texas Roadhouse because it just seemed silly enough to the perfect place to end the day.

My favorite part of the trip so far has been going to NASA. Although I was again elated to hear about JFK, this time in regards to his dedication to the space program, the tram ride was what got me. Right when we arrived at the Space Center we boarded a tram ride that brought us into NASA itself, not just the visitor section. We saw the old mission control room where missions from the Apollos to the early 2000s were carried out. While there we sat in the old viewing room and Eric was told that the seat he picked was where Queen Elizabeth sat when she took the same tour. Seeing as I have always liked history it was cool to see things that before spring break I had only read about including space ships that had actually gone into space. We also got to touch a moon rock but I feel weird about that.

The spring break location does not matter in the grand scheme of things as long as you look to relax, have fun, and make the most of it. Spring break 2015, AKA my last spring break ever,  was nice because I was finally able to explore the place that my family now calls home while spending time with friends. I fly back on Sunday but until then my game plan is to eat Sonic about ten more times and binge on Netflix before returning to a very hectic last couple of months at Saint Rose.