by Alexander Lawrence on October 9, 2015 in All About Saint Rose, Golden Knight Spotlight · 0 Comments 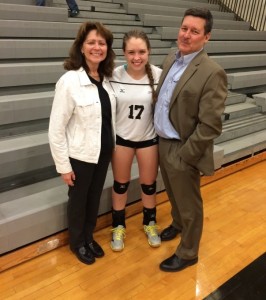 Erica (17) with her parents Ben and Lynnette Ziskin

What set SR apart from other schools: “The small campus and open interaction with the professors. The relationship with professors and students is very open and they go out of their way to help you and show you’re not just a number.”

Why SR Volleyball: “I was recruited here. My high school coach runs a summer volleyball camp and Brian (Goodale) was a coach there (Spike Mountain Volleyball camp) and that’s how it all started. I chose them also because of the level of play, very good team atmosphere, and I knew the coaching staff could help me become the best player I could be.”

Most memorable moment or game: “My junior and senior year, we were state champions at my high school. They were both very rewarding experiences and all our work on the volleyball court finally paid off. Also in my second year at Saint Rose we went to the NCAA Tournament and faced New Haven. Even though we lost in three games it was a big accomplishment for us since that was our first trip since 2006.”

How you got involved: “I was eight-years-old. In 3rd grade, I went with my sister to an afterschool volleyball program. My sister plays volleyball at Iona College. My father played football and my mother played soccer in high school.”

Where you draw your inspiration from: “I’m inspired by my teammates to be the best player I can to help the team be successful.”

How do you prepare before a game: “The night before I watch as much film as possible on an opponent and study plays. I try and get a goodnight sleep and eat well. Usually before the game I get some sort of warm-up and finally I brush my teeth right before team warm-ups.”

What are you looking to accomplish this year: “I’d like to become the best defensive player I can and run a successful offense at the same time and achieve another NCAA bid.” 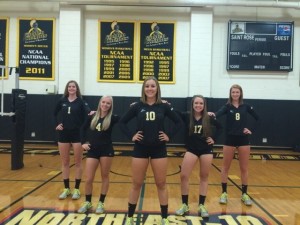 My Comments/ takeaway from the interview: Erica Ziskin is a third year student at The College of Saint Rose who is studying bio-chemistry. She is very focused on her studies and truly has a passion for volleyball. She works very hard to do all she can to help her team do well on the court. “As a freshman, I was unsure of where I fit in and where I belong. Now as a junior, I am a lot more vocal and more confident in myself about running the offense. Going forward I hope to keep my role and be more successful in helping my team be successful,” Ziskin had to say. “On the court my teammates have held me to a high standard which has helped me become a better player and person. Off the court, we’ve developed a good team chemistry and I’m really happy with the friendships I’ve made,” Ziskin said about her teammates. Clearly Erica truly is appreciative of her teammates and the opportunities she’s been given at Saint Rose. During my interview with her, I felt a burning passion for her love of volleyball. She does everything humanly possible to prepare mentally and physically for a game. She’s very competitive and loves winning. She’s a great leader and just wants to see the team do well. She is a great person who gave me a sense of belief when talking to her. Her competitiveness is contagious and she got me excited to see the Golden Knight’s in action. GOOD LUCK SAINT ROSE VOLLEYBALL!! 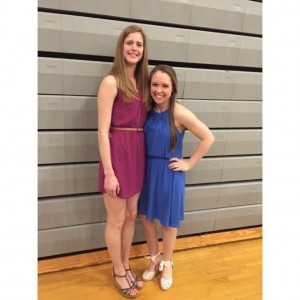 ← Found: A Career, Adventures, and a River Otter
You Want to do WHAT this Weekend?! →