by Alexander Lawrence on April 8, 2016 in All About Saint Rose, Alumni, Golden Knight Spotlight · 0 Comments 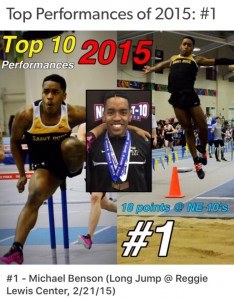 What set SR apart from other schools: “The small community and class size stood out to me. You’re not just a number here. I originally came here for computer science, but then I realized making films was my passion.”

Why SR Track and Field: “I was recruited by Saint Rose. They offered financial stability here. The program was young as well, so I knew I’d grow with young people.”

Most memorable moment or game: “Last year at indoors at Reggie Lewis Center in Boston I won conferences in the long jump. I came in 5th out of 50 total competitors. Going into finals I was 5th and on my last jump I jumped 23ft 2in to win conferences.”

How you got involved: “I never really liked Track and Field until my junior year of high school. I kept a promise to my late friend Chris. The promise was that I’d run track with him because he was so persistent. I ran track to go as far as he would have if he was still alive. My dad also ran track in high school and my younger brother played soccer.”

Do you have a saying or motto you live by: “Hard work beats talent, when talent doesn’t work.”

Where do you draw your inspiration from: “My late friend Chris Urvang and Brittany Walsh”

How do you prepare before a game: “Listen to music to drown out all distractions. Then when we get to the meet I like to get a good warm-up.”

What are you looking to accomplish this year: “I want to have a nice healthy season and break my old hurdle record and the outdoor long jump record. Looking to finish out both my collegiate and academic career here strong and look forward to graduating.” 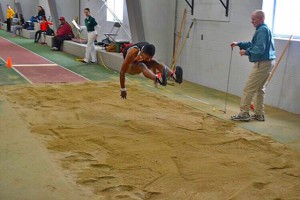 My Comments/ takeaway from the interview: Michael Benson is a fourth year student at The College of Saint Rose. He’s getting ready to get his degree in communications and finish out his track career. “Before when I first came here the team wasn’t as close and everyone sort of had their own groups. Performance-wise, I was nervous when competing my first year. As the days, months, and years went by; I found myself getting into the groove of things. Now the team is as close as I’ve ever seen it. I think we’re all a giant family. I’ve seen tremendous progression amongst the team. We got smaller in numbers, but the intensity of the workouts stayed the same. Going forward, I believe the team is in good hands due to the all knowledge it has learned in what seemed to be a short amount of time,” Benson said. “On the track, they keep me motivated, entertained, and happy whenever I’m feeling down. They’ve helped me reach my full potential and knowing the amount of potential this team has, I know they’ll be fine once I’m gone. Off the track, they make me realize what good of friends I really have. I’ll miss all of them and all the memories,” Benson said about his teammates. He has without a doubt made his mark here at Saint Rose after improving year-after-year and even going as far as breaking records. Safe to say Saint Rose will be losing one of its brightest and well-developed athletes. Whenever he stepped on the track he brought a different dynamic to the team. I enjoyed getting to know Benson personally as a roommate this past year. He has worked hard to get where he is at in life. I hope nothing but the best for him going forward. Best of luck as you finish out your final season at Saint Rose. #GoGoldenKnights #GoldBlooded

Senior Section: I think it’s important to reflect on the past. With that being said, my track career here at Saint Rose was something I never expected. I have met people that have touched my heart in many different ways and the coaching staff took me in and taught me different life lessons. People often ask what I will miss from my experience here as a college athlete. I will miss all the friends I made, the thrill of competing on the collegiate level and the accomplishments I earned. I really want to thank our current coach Soroya Hudson. She is someone who believes in me, other than my parents, even when I don’t believe in myself. She is always pushing me past my potential and teaching me new techniques towards my event every day. I also want to thank my parents who got me here and who attended all of my track meets. Last but not least, I want to thank my teammates who became a second family to me and will be greatly missed. 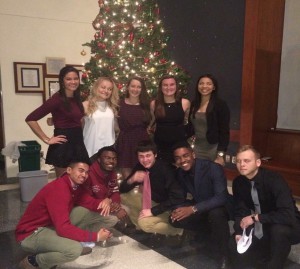