by Alexander Lawrence on December 4, 2015 in All About Saint Rose, Golden Knight Spotlight · 0 Comments 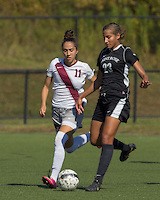 Why SR Women’s Soccer: “I liked this team a lot. When I came and visited the school’s team I felt comfortable. It was already a good program and I knew I’d do well in this program.”

Most memorable moment or game: “In college, the best game I’ve ever played in my life was at the NE-10 Championship when we played Assumption. It was the best feeling when we won. They had a lot of fans there and it felt good to beat them.”

How you got involved: “I started playing co-ed soccer in Kindergarten with my class. I was about nine-years-old when I started playing club soccer and in middle school and high school I played soccer as well. My dad played college basketball and was a professional basketball player in New Zealand. My brother played basketball in high school. My younger cousin is planning to play soccer in college once he graduates high school. My uncle Sam Singer played for the Portland Timbers professionally. He also played soccer in high school and college and made it to the Final Four.”

Do you have a saying or motto you live by: “N/A”

How do you prepare before a game: “I’m very superstitious. I do a lot of the same things like eat the same food on game days. I usually stay to myself in the locker room and get focused.”

What are you looking to accomplish this year: “After soccer the biggest thing is finding out what I want to do. I’m excited to finish out my education and try new things.” 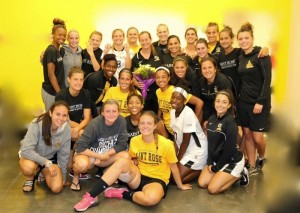 My Comments/ takeaway from the interview: Michaela Phillips is a fourth-year senior at The College of Saint Rose and will graduate with her biology degree in May. “My first three years I played on some really good teams. I played with some great players. Some of the best I’ve ever seen. Now I’m sad soccer is over, and I can’t believe we (seniors) won’t be playing together anymore. I think the soccer team is in the same position I was my first year. We’re losing eleven people, so new opportunities will arise and the underclassmen will have more chances to step up,” Phillips said. “I think I’ve matured a lot since I first came here. Being at Saint Rose, the women’s soccer team has helped put myself in certain situations on and off the field,” Phillips said about her teammates’ influence on her. Michaela is truly a hard worker and loves soccer with a passion. She has had to adjust to moving to New York from her hometown in Oregon. Her uncle and father were well established athletes and clearly she was too while she played. It’s always sad to see seniors go, but I’m glad I got to meet her. She reminded me about why I love doing these interviews again. She’s ready to pass on the torch and I want to take this time to congratulate the Saint Rose Women’s Soccer team on their efforts this past season.

This week since Michaela is a senior I put in a special section for her to leave a message to anybody she wanted. Here’s what she said: “I’d like to address this to my teammates, but mostly the seniors. I would just like to say thank you to my class because they were a big reason why I stepped on the field every day. You guys are and will always be my best friends no matter where life takes us in the future. The hardest part about soccer being over isn’t necessarily not being able to play soccer because I can always do that, but it is not being able to play soccer with all of you by my side. You guys made moving across the country at 18 easy for me, and thank you for that. Most importantly, thank you for all the memories I will never forget.” 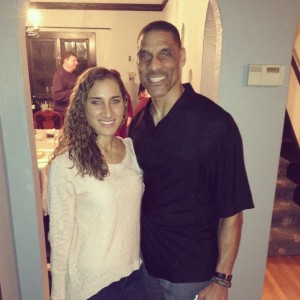 Michaela and her dad

← Good to know: extending the definition of “home” to a community in need
How I Turned an Internship Into a Job: The Saint Rose Difference →