Good to Know: Jimmy Fallon ’09, Saint Rose was his muse

The troll dolls, the “Bathroom Wall”

… it all started here!

As Jimmy Fallon prepares to assume the “Tonight Show” throne February 17, it is worth noting that he has played Saint Joseph Hall. He has done standup down the street at Bogie’s and even down the stairs, he has said, in the Lima Hall laundry room. (“The only place we didn’t drive everyone nuts.”)

You heard it here, first! Jimmy Fallon, shown in this 1994 Saint Rose yearbook photo, in Saint Joseph Hall, trying out the John Travolta-talking-to-a- troll-doll comedy schtick that would later make its way to his first CD “The Bathroom Wall.” (*addendum: see final photo)As a Saint Rose student, Jimmy in fact made just about every stop on and near campus a venue for his comedy. That includes his work-study job in the Office of Student Affairs, where he sat, Red Sox cap pulled low, boom box and guitar on his desk, scribbling notes.

“He’d look up and see me, stop scribbling and try something out, then say ‘Ruth, how does this sound?'” recalls Ruth Wakefield, assistant to the vice president for student affairs, who probably logged more Jimmy-hours than anyone during his three-and-a-half years on campus. “It might have been a joke or lyrics or a song, and I would laugh because it was so silly,” she added. “I didn’t realize at the time how important it was to him. He was really working.”

Wakefield not only predicted Jimmy’s success but she has the proof:

Once, during his tenure as a work-study student she told him she was so sure he would become famous that she wanted his autograph. He complied, scrawling his signature on a scrap of paper – which she has kept in her desk ever since.

“I think he was kind of taken aback by it,” she recalled. “He didn’t say anything, just signed it.”

Jimmy Fallon, who came to Saint Rose in 1992 from Saugerties, N.Y., has emerged as one of the biggest personalities of the Facebook generation. A standout on “Saturday Night Live,” a Grammy Awards host and Grammy winner, he has appeared in more than a dozen movies and, from early 2009 until February 7 of this year, hosted NBC’s  top-rated “Late Night With Jimmy Fallon.”

Starting Monday night, February 17, he succeeds Jay Leno on “The Tonight Show,” sealing his place in entertainment royalty. But The College of Saint Rose was perhaps Jimmy’s first stage. By all accounts a quiet student in the classroom, the computer science-turned-communications major spent much of his free time perfecting impersonations that would one day join his own persona. 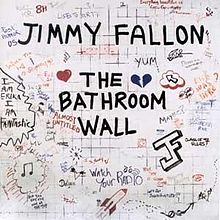 That was Our bathroom wall!

There is “Jarret’s Room,” the amateurish “SNL” webcasts from Maginn Hall featuring Jimmy in blond dredlocks; along with his famous celebrity-talking-to-troll-doll bit rolled out at a College outing at the YMCA Silver Bay Conference Center in Lake George. Then there was Jimmy’s first CD, the Grammy-nominated “The Bathroom Wall,” loaded with college dormitory humor and parodies of Saint Rose classmates who certainly recognized themselves.

And from Lima Hall to the studios of NBC, Jimmy has never left (nor left alone) his alma mater for long.

In May 2009, 14 years after he left college a semester early to pursue a comedy career and a dream of landing a spot among the “Saturday Night Live” cast, he was back to receive his bachelor of arts in communications. Jimmy was a double headliner that day at the Saratoga Performing Arts Center, earning an honorary degree reflecting his achievements and then joining classmates to collect his bachelor of arts degree.  The College was, in fact, pleased to award Jimmy his diploma after he earned experiential learning credits through a portfolio review of his television work. Ok, so they never actually attended any classes together. Jimmy and his new friend, Ashley Teater,  are nonetheless both proud members of the Saint Rose class of 2009.

With his parents, Jim and Gloria, and his wife, Nancy Juvonen, seated up front to hear his commencement remarks, Jimmy expressed gratitude to the College and in particular the ACCESS program, which provides extra academic support to students who might not otherwise be admitted to college.

He also talked about how difficult it had been to leave Saint Rose early to take a chance on comedy – and flop after a less than stellar first audition for “SNL.” He talked about failing again later when he tried his hand at movies only to be panned for both his acting and heavy makeup. “Just when you think you’ve got it made you never know when something will come along and knock you down,” he said. “And as long as you love what you’ll be doing you’ll be fine.” Not that Jimmy was entirely easy on the College, noting “I am grateful for how hard Saint Rose taught me to work,” he quipped. “Do you know how hard it is to get a degree from this place?”

didn’t like the person next to them – made DegreeSearch.org’s list of funniest commencement speeches. A few nights after graduation, he hung his honorary degree diploma in an overhead lighting grid of the “Late Night” studio in front of a live audience.

Jimmy is taking much of his talent with him, including writer Gerard Bradford ’96 and his house band The Roots. It is unclear whether the diploma also will come to “The Tonight Show.”

But if the past is any indication, the College will retain its recurring role in his repertoire. 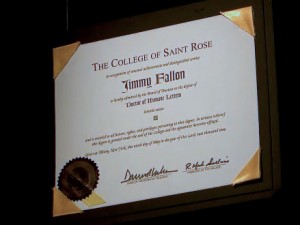 Dr. Jimmy: Jimmy’s honorary-degree diploma landed in a revered spot: overhead in the rafters above his “Late Night with Jimmy Fallon” stage. No word yet on its future.

Not long ago, Jimmy ‘dissed Gerard for making him pay for a ride down the block. During an interview with Olympic gold medalist Hope Solo, he trotted out a photo of the Saint Rose 2011 national champion women’s soccer team and joked: “I tried out for this team. And I did not get in. But props to those guys; they are awesome.”

When students gather to watch Jimmy’s “Tonight Show” debut, people who remember him joking around a lot at Saint Rose want to make it clear he indeed graduated. 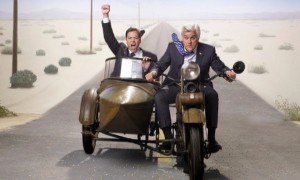 Sidecar no more! (Jimmy and Jay, in transit.)

“A lot of people don’t realize it,” said Wakefield. “I have a picture of us the day of graduation on my desk, and I’ll have students and employees look at it and look again and say, ‘that looks like…’ and I’ll say ‘Yes it’s him.’’’ (* Actually, she probably heard it first. Jimmy Fallon and Ruth Wakefield, together again on his graduation day.)

2 comments for “Good to Know: Jimmy Fallon ’09, Saint Rose was his muse”