by Jane Gottlieb on November 2, 2012 in Good to Know, The College of Saint Rose · 0 Comments

It’s no secret that the risky lending schemes that helped cause New York’s economic collapse took place in full view of the individuals who are  supposed to keep tabs on such matters: bank regulators.

“It is not that there were no rules. It is that there were so many rules that the risk of the complex investment instruments was difficult to understand,” noted Severin Carlson, dean of the Huether School of Business at The College of Saint Rose. “The regulators did not object to the new instruments. Credit reporting agencies gave them excellent ratings, and ultimately the investment strategies didn’t work. So who do you throw in jail?”

Last month, Benjamin Lawsky, New York’s first superintendent of the state Department of Financial Services, discussed these and other lessons from the crisis when he delivered the college’s 21st annual Peter M. Tully Endowed Lecture. 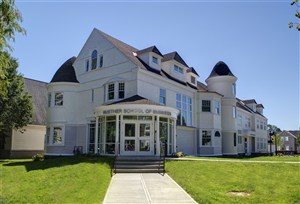 The College’s new business school home is poised to welcome many more top leaders of finance and industry. (image used with permission by The College of Saint Rose)

Lawsky noted that not a single banking official had been jailed or indicted, in part because their organizations had become so huge it was tough to pinpoint blame and in part because the criminal intent is hard to prove. In addition, he said, regulators and banks had grown too friendly. Referring to himself as a “self-improvement buff,” he said that given these factors it is more practical to work toward correcting the system than try to redress the wrongs. He discussed plans to  become less cozy with banks and to give consumer groups a bigger voice. “The lesson of the regulatory failure is that it’s up to us now to prevent future crises,” he said.

Carlson looks forward to inviting more top-level practitioners to Saint Rose, as the business school grows and introduces programs at its new home at 994 Madison Ave., opened with the fall semester. He said Lawsky’s remarks illustrated the human influences behind our financial systems.

“What he did was show the reality of the environment which economics works in,” noted the dean. “You can model things mathematically but there are still items that no model can actually cover. Economics is still a social science and it is political.” 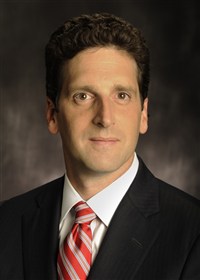 Super-regulator: Can Benjamin Lawsky provide enough regulation to control runaway lending practices without hurting the small banks that did nothing to cause our financial collapse? (image used with permission from NYS Department of Financial Services)

The Department of Financial Services was created in October 2011 by combining the banking and insurance departments, a move Gov. Andrew Cuomo made to modernize regulation and increase efficiency. With a value of more than $6.2 trillion, the agency has oversight for 4,400 entities, ranging from the largest banks and insurance companies to loan servers and check cashing operations.

Lawsky, a longtime Cuomo aide, said that as New York’s top regulator he often hears two competing voices: one warning against adding regulations that will further constrain an economy struggling to rebuild, and the other noting that more oversight is sorely needed to keep powerful banks from repeating practices that brought about the failures.

“Are the regulations going too far or not far enough?” asked Lawsky, who spoke in the Touhey Forum before business students and faculty and a share of black-suited financial executives in both private business and state service. “The answer is yes and yes.”

A classic example of the quandary is a proposal to expand federal Basel III Capital Requirements to all banks. The move would require banks to raise the amount of capital they must hold, as a buffer against future downturns. Lawsky said the state’s community banks, which control just 10 percent of the assets, would be saddled with compliance oversight. “It’s a well-intentioned idea that treats the smaller banks like the too big to fail banks,” he said. “The community banks had nothing to do with what caused the financial crisis.”

The reality of the high-stakes decision-making his office is charged with became clear within minutes of his prepared remarks when Lawsky opened the floor to questions. One member of the business community, who refused Lawsky’s request to identify himself, blasted the Cuomo administration’s recent refusal to raise workers’ compensation rates and, instead, actually lower them.

Carlson said the exchange, while heated, had been useful for students.

“When that question came up it was the right question. The answer was that the governor decided not to do it,” noted Carlson. “Up until then (Lawsky) was talking generalities and now you’re back in the real world. It’s still a political environment and you have people on both sides of an issue.”