Alfalfa was one of the luckier Kemp’s ridley sea turtles tousled by the Cape Cod shoreline that Saturday morning. Weeks after the reptile should have left for warmer waters, with a fast falling body temperature, he was hours from death when College of Saint Rose junior Victoria Snyder spotted him being pulled in by the waves. 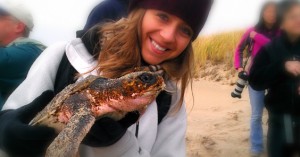 New lease on life: Thanks to Saint Rose junior Victoria Snyder, this Kemp’s ridley sea turtle, named Alfalfa, has a shot at starting a new life down south instead of succumbing to freezing waters off Cape Cod.

Snyder, a biology major, was not there by accident. She was on a weekend field trip that biology professor Brian Jensen led in November for the purpose of recovering stranded Kemp’s ridleys, the world’s most endangered sea turtles.

Students were there to earn physical education credit and they worked hard, rising early and spending much of the time walking the beaches. Their surveillance on a peninsula known as Great Island was timed to tides and likely locations. The students were trained to know what to look for and what to do if they found a cold-stunned turtle.

But anyone familiar with such rescues knows, getting there in time is a hit-or-miss proposition at best.

“We have a lot of coastline to cover from Truro to Dennis,” Robert Prescott, director of Mass. Audubon’s Wellfleet Bay Wildlife Sanctuary, explained recently. “If the ridleys are not recovered quickly, they can succumb to the almost-freezing temperatures.”

Alfalfa, named for the tuft of seaweed on his head, was not lively when Snyder spotted him (or her, the gender is not known until the turtle matures) being tossed about. As she approached, she thought the turtle was dead.

“He was lethargic but his eyes were wide open,” she said. “Then he lifted his head. I was so excited!”

As instructed, she brought the six-pound, two-year-old to dry ground, covered him with seaweed to stabilize body temperature and posted a flag in the sand to signal a rescue had been made. Jensen called Audubon, which quickly dispatched someone to carry the turtle to safety.

“I felt so protective. I really didn’t want to let him go,” said Snyder.

She had just rescued one of the 146 Kemp’s ridleys – just 78 of them found alive – on Cape Cod from early November through mid-December, the season when the turtles, stunned by the cold water, become immobilized and drift to shore. 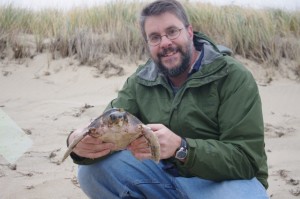 The fact that the turtle made it even this far is a feat, notes Associate Professor Brian Jensen, who was with his students in Wellfleet for this rescue Nov. 16.

Born on the eastern shore of Mexico or Texas Gulf Coast, the juvenile Kemp’s ridleys drift in ocean currents. Occasionally, they miss the cues – the shorter days, colder water – to migrate south in the fall, Prescott said. With climate change, the water remains warmer later in the season, drawing many more fragile turtles to Cape Cod than even a decade ago.

The simple gesture of trolling the shoreline, plucking them up and warming them is part of a big, unlikely survival story, explained Jensen, a marine biologist who has volunteered with Mass. Audubon for a decade and brought Saint Rose students there for the past six or seven years.

“By the time the turtles get to Cape Cod, they have already jumped through so many hoops. You don’t want to see them die,” said Jensen, who brought a Saint Rose group last year that did not spot a single one.

Few eggs even survive long enough to hatch, he said, as predators dig them up. The ones that do hatch walk down the beach to the water, vulnerable to scavenging birds. Then, they are preyed on by fish.

“The larger they get the more likely they are to survive,” he noted.

And Kemp’s ridleys were nearly knocked out all together because people ate too many of their eggs, as many thousands died after being caught in the nets of shrimp fisheries. By the mid-1980s there were no more than 500 nesting females. That number is up to perhaps 20,000 today due to conservation measures.

Alfalfa is still considered among the world’s rarest. It doesn’t help when they find themselves in New England in early winter.

The goal is to release this Kemp’s ridley into the Atlantic and join perhaps thousands that migrate up and down the Eastern Seaboard until they reach maturity and lay eggs. By then, the Saint Rose turtle might be outfitted with an electronic tracking device. But Jensen said it is as unlikely to see this turtle again as it was to have found it to begin with.

“It would be like me saying ‘I’ll put a quarter in the city of Albany, go find it,’” he noted. “It’s not like you’d be bumping into them in the ocean. The only time you might see one again is if it comes up to breed.”

The story will live on at the College. Jensen will point out to students that getting physical exercise is not just healthy but helpful to other living creatures. He will show biology students that they actually can make a difference.

The experience has already made an impact on Victoria Snyder. She had planned to pursue molecular biology but Jensen’s zeal for marine science has her reconsidering. So has meeting Alfalfa.

“I started taking Dr. Jensen’s class in invertebrate zoology study and now is what I want to study,” she said. 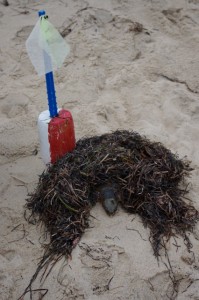 A turtle SOS: once discovered, a stranded turtle is moved to dry ground, warmed with seaweed and flagged in order to signal that assistance is needed.