Good to know: The College of Saint Rose Mock Trial team mixes it up with the University of Rochester and Siena College

A terrible thing happened the morning in August 2010 when Jesse Duran and Sydney Park, 11-year-old friends in the fictional town of Midlands, found a gun in Park’s home. Jesse fired the weapon and killed Sydney. 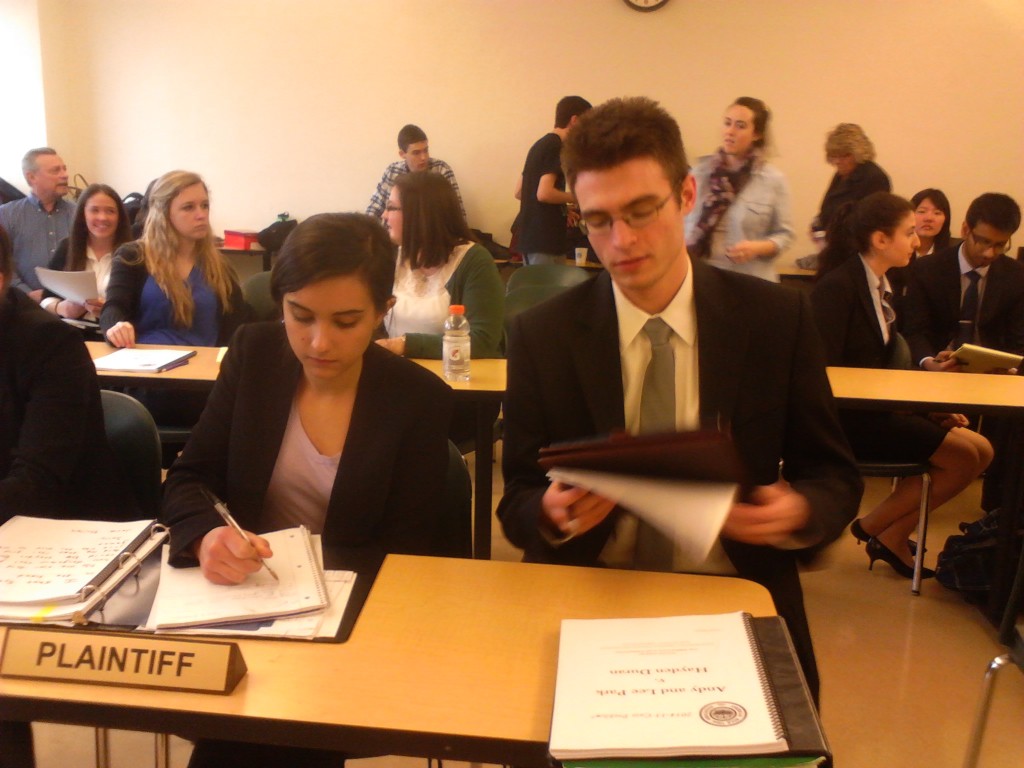 Making the case: Allyssa Rose and Kyle Duclos, as plaintiff’s attorneys, brush up on some details as they continued to pursue an aggressive strategy in the fictional, but mightily realistic Park v. Duran case. The Saint Rose mock trial team has been studying and trying the case over and over since August to prepare for the Mock Trial Association’s national competition.

Beyond that, the facts are open to interpretation. The girls were perhaps playing a game that went awry. Or, Jesse was a neglected, gun-loving child who indulged in fantasies based on the violent video games her mother let her play excessively. The Parks arguably shirked their parental duties by leaving a gun in the home. The children were of a questionable age to be left unsupervised.

The mock trial teams of Saint Rose, Siena College and the University of Rochester floated and rebutted the various theories before actual judges last week during the inaugural Mock Trial Scrimmage hosted by Saint Rose. Acting as attorneys for the plaintiffs and for the defense, and as expert witnesses and various players in the two-family tragedy, the four mock trial squads (Rochester brought two) argued convincingly the hypothetical civil case Andy and Lee Park v. Hayden Duran.

During one exchange, Saint Rose forensic psychology major Kyle Duclos, as a plaintiff’s attorney, chiseled the words of “Mrs. Duran,” from the Rochester team, to a nub by cutting off much of what she said.

“I object, your honor. Adding superfluous information!” he barked, a request sustained by retired Court of Claims Judge Dan Lamont, who presided.

The Saint Rose team, started three years ago, has been studying Park v. Duran exhaustively since August in order to prepare for the American Mock Trial Association’s national competition that starts Thursday in Manchester, New Hampshire. Another 200 or so teams across the country have also been practicing and trying the very same case – alternating between plaintiff and defense and even changing the actual charges being brought with each thump of the gavel. 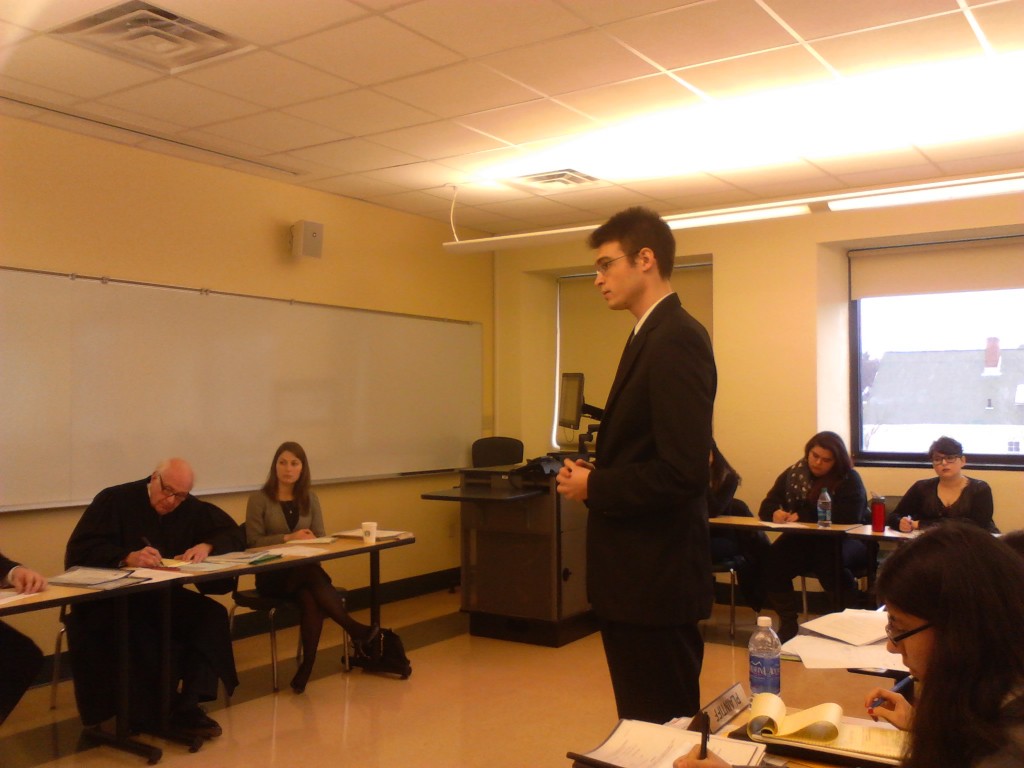 He objected! Saint Rose forensic psychology major Kyle Duclos was an intimidating presence in the “courtroom,” when Saint Rose went up against Rochester in the mock trial case. Retired Court of Claims Judge Dan Lamont, keeping notes, was impressed by how well prepared the students were.

And, team  members change roles. On Sunday, for example, Taylor Basford, a criminal justice student who is co-captain of the Saint Rose mock trial team, wept real tears as she testified as the mother of the dead girl.

“To be honest with you, I do find the case emotionally wrenching. It’s really sad,” said Basford, who was anything but weepy later in the day as member of the defense when the mock teams faced off for a second time in a courtroom at Albany Law School.

Last week’s scrimmage, organized by Assistant Professor of Criminal Justice Alfred Chapleau, a former prosecutor who supervises the mock trial team, was a chance to practice against equally prepared teams – and do so before actual judges. The judges kept score – something they do not do in actual trials. But they gave the exercise high points for authenticity. 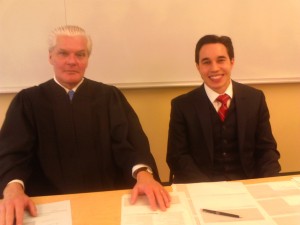 “I reviewed the whole case and it is really, really involved,” said Lamont, as Albany County Court Judge Peter Lynch heard Siena and a second Rochester team argue the case across the hall. “These students seem really well prepared. A lot of the real cases I have tried are much simpler. “

Saint Rose came out the winner in both of its trials. Scoring was based on students’ knowledge of the rules of evidence, their professional demeanor and handling of witnesses. Chapleau said the result was particularly encouraging given how new the Saint Rose team is. But he, like members of the team, voiced caution going into the nationals.

“We have confidence but we do have to remember it was just one school we went against,” noted Basford,  a senior who plans to attend law school in the fall. “The judges will be looking at a lot of teams next weekend.”