by Caroline Murray on November 7, 2018 in All About Saint Rose · 0 Comments 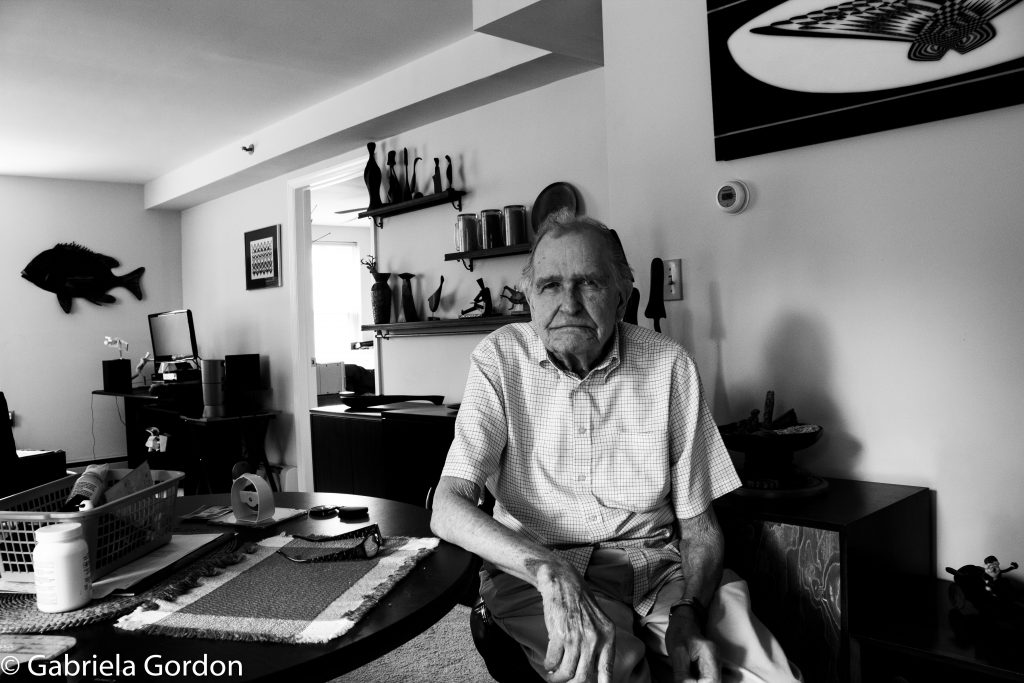 Birute Martjuchin grew up in communist Lithuania before escaping to Germany. Andy Chaidez was raised in the same orphanage as Marilyn Monroe. Louise Trancynger is a retired rock climber and motorcyclist. Walter Dackson is a Korean War veteran and avid art collector.

These people and more are the participants of Saint Rose graphic design student Gabriela Gordon’s latest photography show, “Reminiscence,” which opens with a reception November 9 at the Picotte Student Gallery.

“What ties these people together is where they ended up,” she said.

Gordon ’20 has spent every summer since turning 17 working at The Fountains of Millbrook, a senior living facility and retirement community located in the Hudson Valley. As a server, she works 40 hours a week, multitasking at different venues. Along the way, she has built lasting relationships with residents and their families.

The summer before her junior year at Saint Rose, Gordon embarked on a four-day-long photography project, creating environmental portraits of 17 residents. Along with taking stunning photographs, she interviewed each participant and will play their recordings at her exhibition. 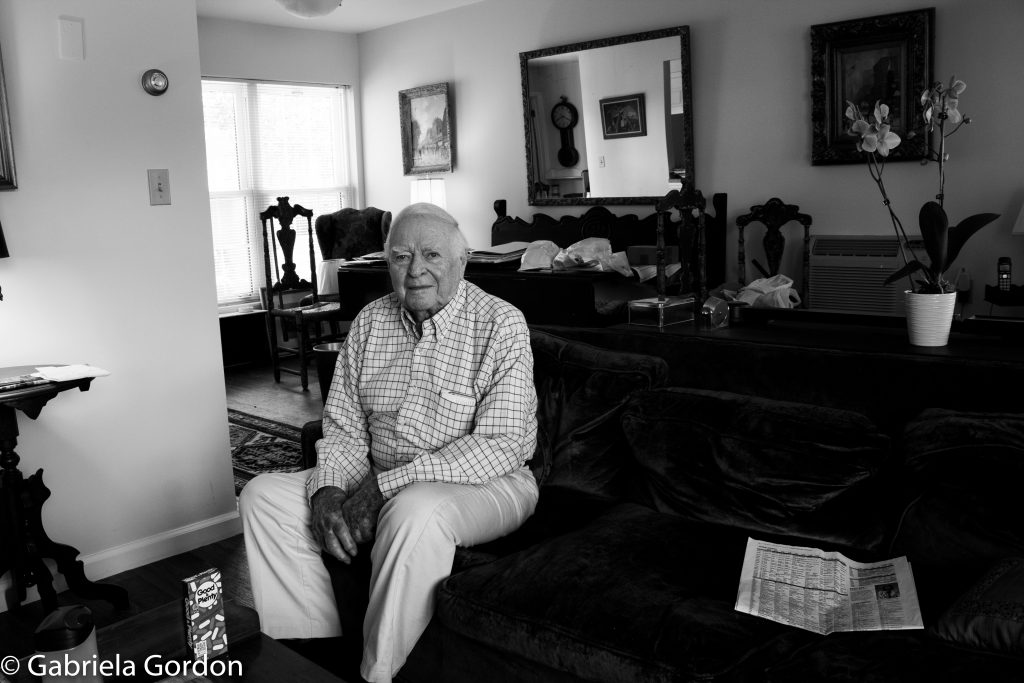 Art professor Thomas Santelli’s photography class sparked the idea for Gordon’s project. He shared with her the environmental photography of Jeffrey Wolin, who photographed Holocaust survivors. The artwork reminded her of a resident at The Fountains who survived the Holocaust and recently passed away.

“I thought it would be interesting to learn more about these people,” she said, adding that she was looking for an opportunity to take on a big project. “They mean a lot to me.”

The project was a huge undertaking, and Gordon decided to hold off until summer break to tackle the challenge. That meant she was on her own and without her professors’ supervision. However, before leaving for The Fountains, she received sound advice from Santelli and art professor Rob O’Neil.

“I gave them the gist and they gave their opinions,” Gordon said. “I love to shoot film. … I would have loved to do the whole thing in film, but Rob talked me through doing a compromise. I shot film, and I shot digital.” 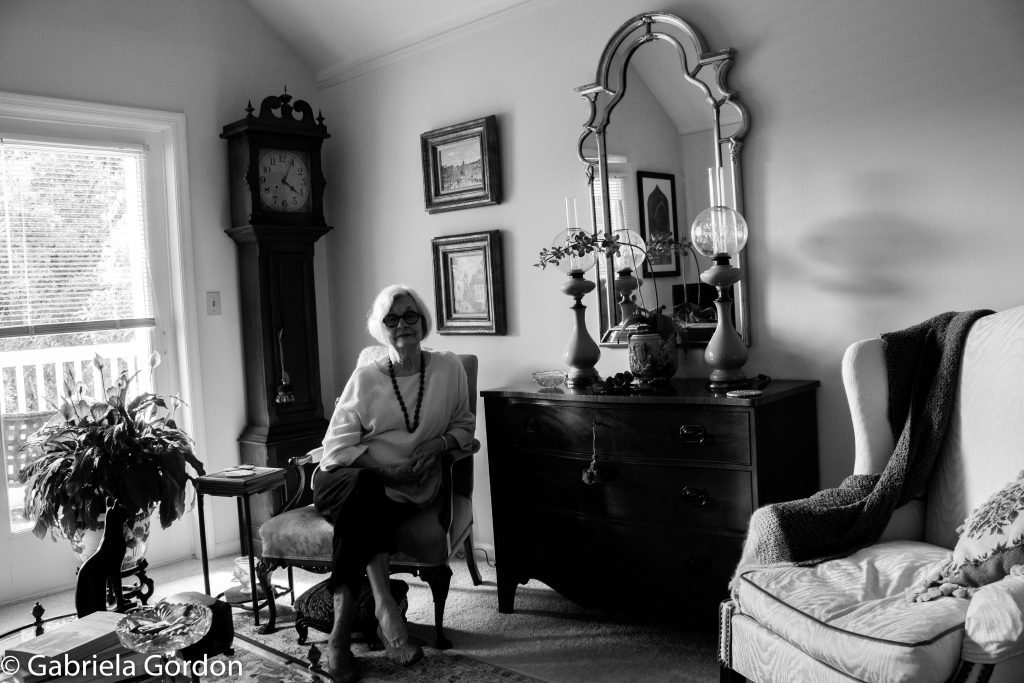 Digital photos will be on display at her show, but Gordon plans to produce film for the participants whom she worked with, digging into their personal lives and unveiling their unparalleled pasts. She interviewed 17 people in all, dividing each person (and one married couple) into hour-long time slots.

She asked the residents a specific set of questions she prepared ahead of time. The questions included, “Did you get married and have a family?,” “How did you meet your spouse?,” “Where do you turn in times of need?,” “What do you believe people want most in life?”

“One of my favorites is, ‘What is one event that shaped your life the most?’,” Gordon said. “There are certain things that people told me that I knew they didn’t have to tell me. They trusted me enough to want to speak to me about it.”

She took their photographs in a room in their apartment or cottage. Each image is like a time capsule, capturing a piece of their past and present.

Bryson Ainsley, 90, a favorite interview of Gordon’s, is a former marketing director for IBM.  She learned that Ainsley knew Paul Rand and Charles Eames, famous graphic designers and artists that Gordon now studies in class. 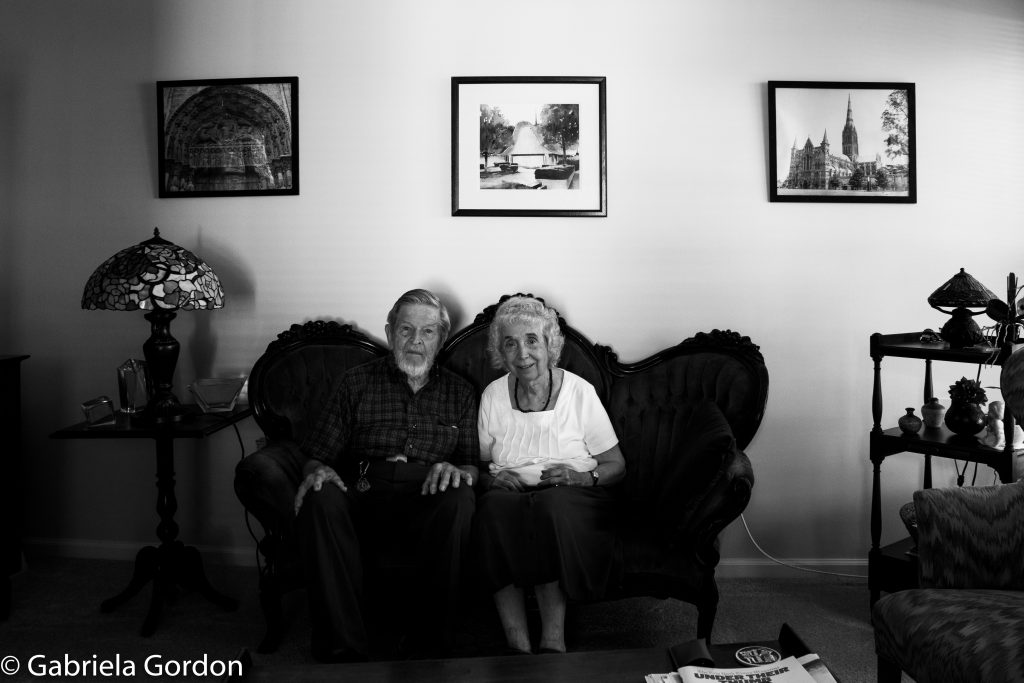 “He designed the famous Eames chair. It is a chair made out of form-fitting wood.  It’s very expensive,” Gordon said.  “I did research on them when I built the chair in sculpture class, and it was interesting to hear that, ‘You know those people?’ ‘I know those people!’”

Nancy Gregory ‘50, an alum of Saint Rose who came from Colonie, made an instant connection with Gordon. Gregory, who is 90 years old, was a student in the nursing program offered at the time. She and Gordon shared stories about their time at Saint Rose, although different experiences.

“I talked to a lot of people, but she was one of my last days. I didn’t keep her on a time constraint,” Gordon said. “She was like ‘Gabby, this could be your life’s work.’”

Gordon wants to continue this project at other senior living facilities. Watermark Retirement Communities is the umbrella company for The Fountains of Millbrook. She is looking to pitch the idea to corporate, hoping to photograph residents at facilities throughout the United States after graduation. 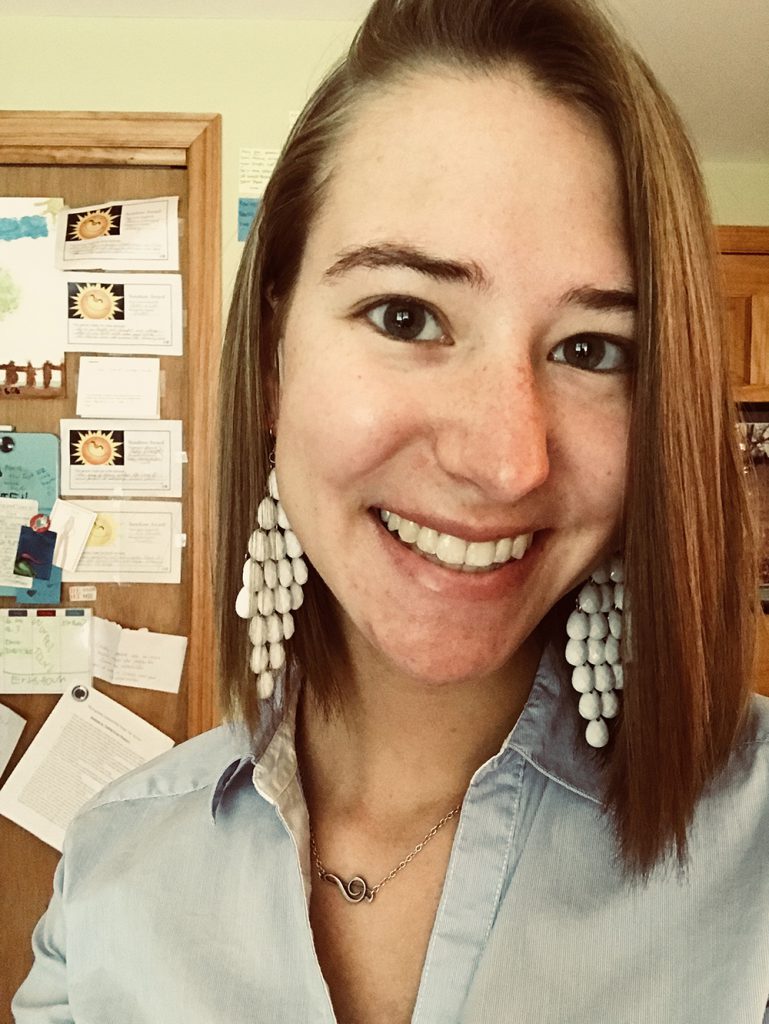 “I grew up around older people. I was an only child for the first four years. I spent a lot of time with grandparents, great grandparents. I like to hear their stories, ” she said.  “I just ask people things.”

But, she won’t get started before she heads back to The Fountains for one last summer. Gordon said she will photograph residents whom she didn’t have time to in August.

“Coming home to see them is always wonderful, but leaving is the worst. After this project, I felt closer to my 17 participants, as they had shared some very important parts of their lives with me and their homes,” Gordon said. “I’ve always felt that you can learn a lot from going into someone’s room.”

What: Reception for “Reminiscence”

Ticket information: Free and open to the public

← Club Focus: Q&A with CEO and President of Rose Record Label
It’s NOVEMBER. Do I still have time to apply for grad school? →