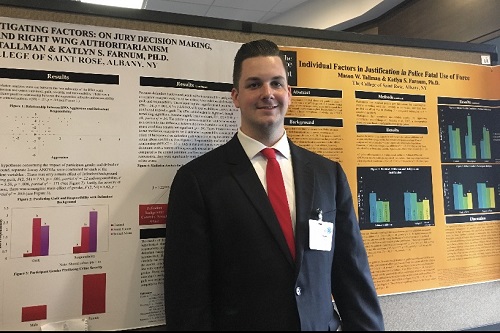 And, a standout track athlete who throws the discus 140-plus feet, he consistently won honors as a Saint Rose scholar-athlete.

Not surprisingly, as Tallman considered graduate school he had options. His choice? His own alma mater.

When classes resume next month, he will be in a new degree program, school psychology, with different professors than those he studied with for his bachelor’s degree. However, Tallman will continue studying the variables that influence public perceptions of police shootings, a topic he discovered and fine-tuned as an undergraduate. He also looks forward to the close collaborations that brought him to his research interest.

Like most high school students, Tallman arrived at college with vague ideas about his academic interests, including law, psychology, and working with people. He was passionate about competing in track and field, which he did with great success, earning the Mohonasen High School record for discus and a top five in the state.

But, semester by semester at Saint Rose, he discovered new areas. First, he was taken by statistics, a subject he did not care for in high school. Then, he began studying forensic psychology with Assistant Professor Katlyn Farnum and things crystalized.

“I found Dr. Farnum and my niche and the path I’m on today,” said Tallman.

Last summer, under her guidance, Tallman used an undergraduate research grant to study whether the perception of police shootings is influenced by who is shot. Specifically, he wondered whether people were less empathetic when they learned that the person shot has a mental illness, or is a woman.

“I wanted to put in different variables and see what the reactions are,” he explained.

Tallman surveyed 150 people and learned that those on the conservative end of the political spectrum were less apt than others to be swayed from their belief that the use of force was justified. He believes there is a great deal of room for further study – particularly study that is inherently empathetic to police, who don’t usually have time to learn the identity of an individual who provokes them into raising a weapon.

“When you add different variables it does change the response,” he noted.

The math and sciences department handed Tallman its top award, Outstanding Senior. He earned the Psi Chi research honor at the Eastern Psychological Association conference in New York City. A few months later, after graduating, he presented more research at the annual conference of the Society for the Psychological Study of Social Issues in San Diego.

Now, he wants to pursue a Ph.D. and pursue education law. He’ll start by returning to the campus where he spent the past four years. School psychology, he noted, both helps a lot of people and allows plenty of room for research.

“I saw that the school psychology is a small tight-knit community and I could continue my research as a graduate assistant,” he said. “I was surprised to be coming back here but Saint Rose fits me perfectly.”

← Dr. Drey Martone: A Professor Who Is Always Learning
Getting Ready for College Senior Year →