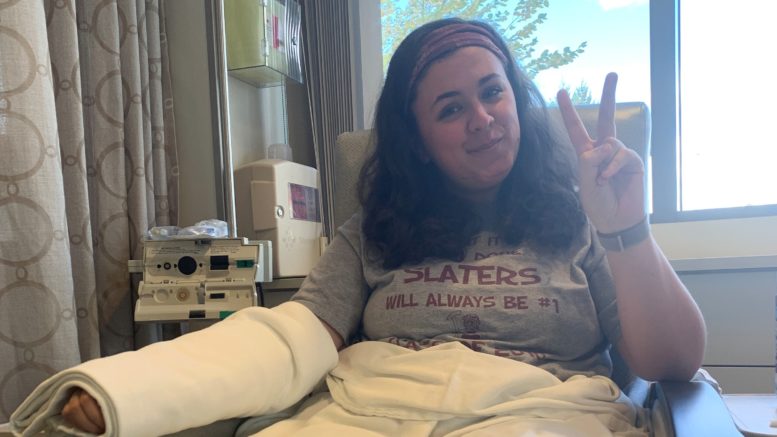 The New York Press Association awarded The Chronicle, the College’s student-led weekly newspaper, second place in the 2019 Best College Newspaper competition, for a story about campus health services. In addition, the newspaper earned third place for a columnist’s reflection on her cancer treatment.

The students produced the piece in their Journalism II class, which is taught by Associate Professor Cailin Brown, who chairs the communications department and is faculty advisor to The Chronicle.

“This story stood out because of the intense digging and perseverance these students demonstrated under challenging circumstances,” said Brown. “Our student journalists worked harder when obstacles surfaced, asked more questions, sought relevant sources, and revised repeatedly – essentially they adopted the exact same research strategies as professional journalists This recognition serves as a key to the profession they represented so well in their efforts.”

In addition, Aileen Burke, who was The Chronicle editor until graduating in December, won third place for her piece “It’s Not About the Blueberries, It’s About Immunotherapy” about her experience undergoing cancer treatment.

Burke, who currently works in communications for the New York State Assembly, will return to Saint Rose in the fall to pursue a Master of Science in Social Work.  In her award-winning column, she noted that in a departure from how cancer is largely perceived her innovative immunotherapy treatment hasn’t altered her appearance, affording her a degree of normalcy.

“I do not present like a stereotypical cancer patient because I am not receiving a typical – what is typical anyway? – course of treatment,” Burke wrote in her column.

The judges said Burke’s column succeeded “because she based it on her personal experience but expanded it with facts.”