A Second Lesson in Cultural Adaptation 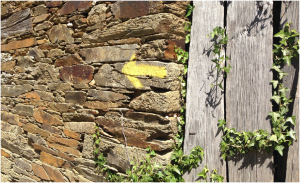 It appears my place in life is to be harangued by bus drivers in front of my students!  Yesterday class met at 9 a.m., with the primary goal to practice following the yellow arrows that show you “the way” as you walk.  As a group we followed the Camino through Burgos, ending behind the Cathedral.  Students took on new conversation topics, asking locals about the upcoming championship soccer games (football here), as well as the more pressing issues of unemployment among the youth and a recent shooting of a politician, in a country with severely restricted gun control.

We then made our way to the bus station for a 1:15 p.m. bus headed west, to the village from which we would begin our pilgrimage, O’Cebreiro.  I originally purchased the bus tickets online, and paid with PayPal, as mentioned earlier, the only manner in which to make such purchases from insecure US credit cards.  When I purchased the tickets online, I bought them to the final destination of Lugo, per the instructions of the group that would be moving our luggage every day.  We didn’t need to go that far, however, or we would end up backtracking on another bus.  I stopped by the bus station in Burgos to see if the tickets maybe (please) might (por favorrrrr) be changed to the destination of O’Cebreiro.  I was assured that NO, there was NEVER EVER a change possible.

We proceeded to the bus station per our scheduled departure, and since the bus would pass through our desired destination before the programmed destination of Lugo, I waited to tell the bus driver we would need to get off early.  They had to go through the preferred destination anyway.  No problem, right?

Wrong.  This is Spain.

“Excuse me, are you the driver?  We will be getting off in O’Cebreiro, instead of Lugo.”  “WHAT?  Impossible!  You cannot do that!  What a mess!”

Culturally knowledgeable now, I responded, “I know!  It’s impossible!  Since I bought the tickets with PayPal, I am unable to change them!”

With that, we boarded the bus, and were on our way.  When the bus stopped 20 minutes later for a 45-minute lunch break (this is Spain!), the driver said, “You” pointing to me, “you must stay, because I have to talk to you!”  With that, she admonished me once again for changing destinations, even though we would have to stop in the earlier town for other passengers, and we were told that if we did not: 1) wear our seatbelts, or 2) put our book bags either in the overhead rack or underneath in the luggage area, we would be assessed a 200 euro fine.

And that was that.  Not one other passenger, besides 72-year old Doña Engracia sitting next to me, wore a seat belt, besides our Saint Rose group.  But we were able to get off in O’Cebreiro, in time to walk around town and have a fantastic group dinner.

It’s really not personal at all!  Just a minor, culturally acceptable, hissy fit!  How cool is that? 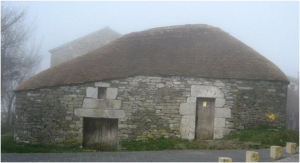 ← Not one single siesta (yet), and a lesson in cultural difference
Walking to Inexistent Castles →