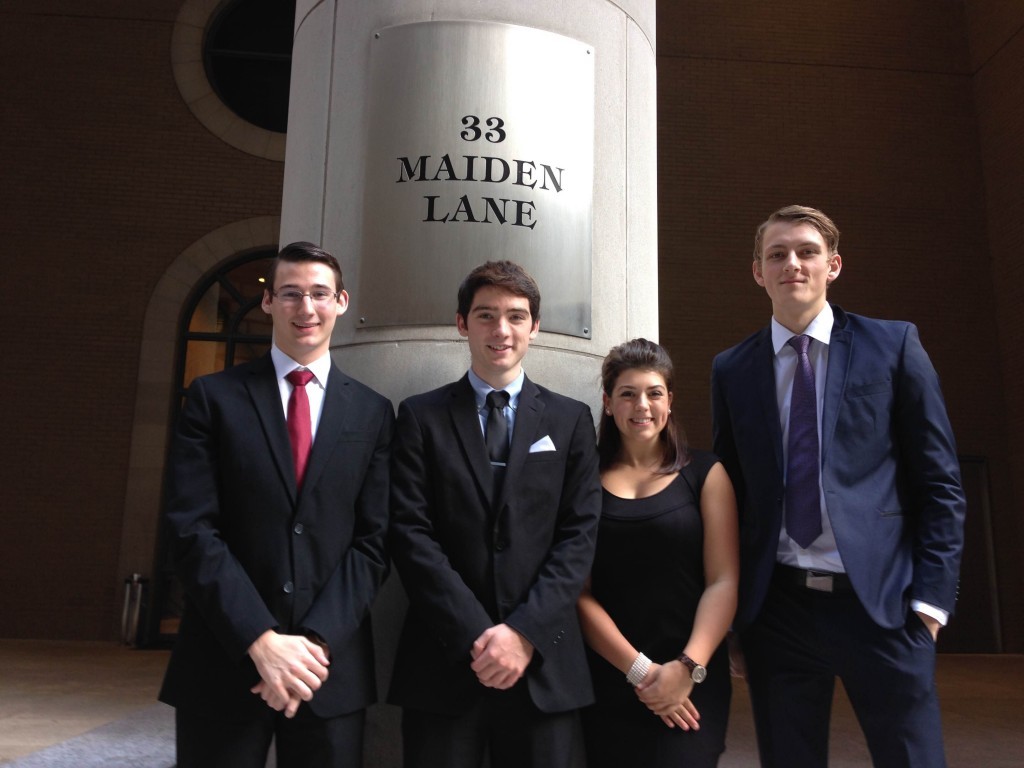 The College of Saint Rose has been named a runner-up in the Federal Reserve Bank of New York’s annual College Fed Challenge, after advancing to the finals to face two other college teams on November 16.  Saint Rose,  which had never taken part in the competition, not only traveled the farthest, but the four team members had not yet taken an economics course before joining the competition, which challenged them to play the role of monetary policymakers trying to improve the nation’s economic picture.

Saint Rose and LaGuardia Community College were named runners-up, behind the winning team from Lehman College.

Here is the full story:

After getting up too early and spending too many hours in traffic, four Saint Rose business students arrived in lower Manhattan one recent weekday morning to enter an enormous, austere office building, go through security and walk long corridors to an immense room where two economists from the Federal Reserve Bank of New York were waiting.

“They were sitting 15 feet in front of us with their water bottles and papers everywhere,” said Eamon Murphy, a sophomore from Swanton, Vermont, who is majoring in accounting. “They were really serious.”

The economists listened as the students from the Huether School of Business outlined their proposal for stabilizing an economy marked by fluctuations in the CPI, GDP, unemployment rate and oil prices. The College economists had 30 minutes to describe these variables, propose a remedy and take questions.

“The judges said they were spot on,” said Charles Murray, an instructor of economics who brought the group through the traffic to face the judges. “There was obviously no right answer, but they were impressed by the argument our team made. They won their bracket.”

Earlier this week, the students were reluctant to disclose their proposal because they will unleash it once again on Monday, November 16, as finalists in the competition, the College Fed Challenge. The team will go up against LaGuardia Community College and Lehman College.

In the first round, held October 29, Saint Rose earned 14.5 out of 15 points to beat a number of other teams – no one is sure how many because the competition was conducted with a good deal of secrecy. What is known is that Team Saint Rose garnered perfect scores in the analysis of economic conditions and the discussion of monetary policy. The judges did suggest some fine tuning in the students’ delivery. And they recommended supporting materials. 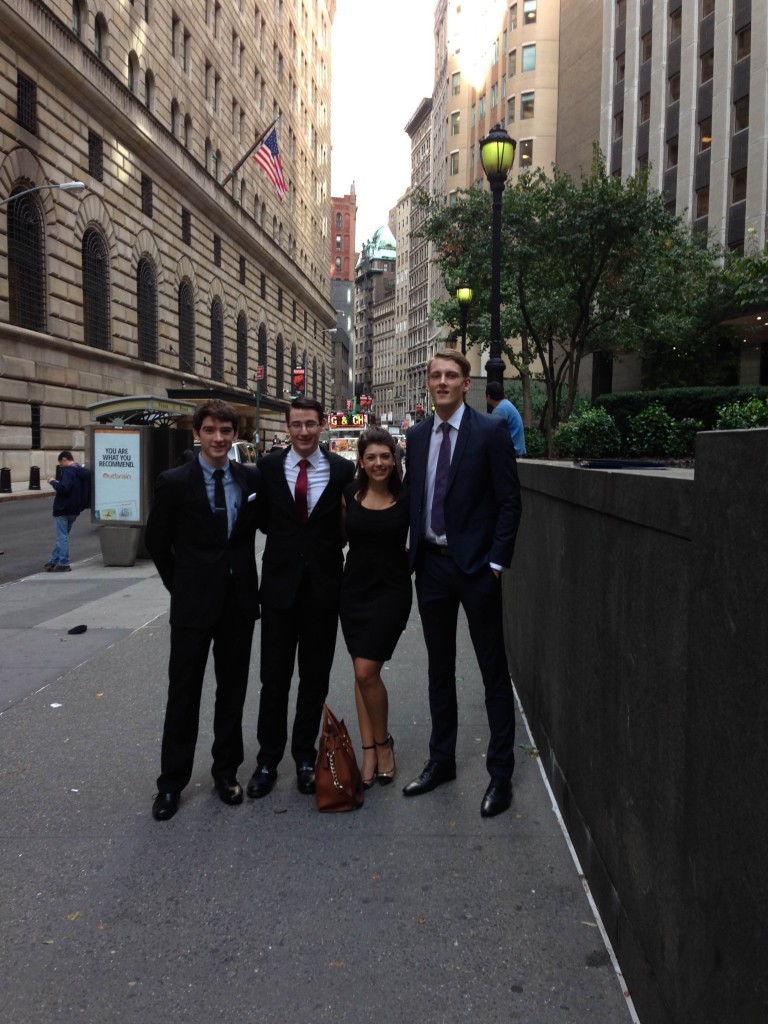 Knowing how GDP, CPI, employment and oil prices fit together earned the Saint Rose team top scores in the College Fed Challenge. Here, the student economists pause on Maiden Lane after their appearance before two real economists with the Federal Reserve Bank.

Dean, Murphy, Julian Lipinski and Charles Levine, who prepped for the finals this week dressed in their crisp dark business attire, said they felt somewhat emboldened by the early success.

“We got to look at the bigger world,” said Levine, a freshman from Saratoga Springs studying finance. “I know something now about how the economy works and that puts me ahead.”

Designed to bring real-world economics into the classroom, the College Fed Challenge asks students to play the role of monetary policymakers. In September, the participants attended a day-long boot camp at the Fed offices on Maiden Lane, where they received a primer in the United States economy and the tools the Fed and other economists use to try to keep it healthy. Next, the teams returned to their campuses with a challenge – help the country following an economic shock – which they had a month or so to study. And as they digested the difference between the “headline” and “core” consumer price index and examined the labor market, team members prepared their own parts. Then, they put the pieces together to frame a cohesive argument for the judges.

The experience was made possible with donations from a private source as well as the economics faculty at the Huether School of Business.

“This really helped me, having a hands-on lesson in economics. And it was nothing you’d learn in a book,” noted Lipinski, who hails from Melbourne, Australia, and is studying business administration.

As they rehearsed for the finals, Lipinski and his teammates looked the part of bankers – and sounded it. Careful to give one another an opportunity to talk, they kept their gazes forward and slowly described their specific areas of concern.

Levine focused on GDP, which he said measures economy’s output. Lipinski looked at the labor market, which he said was strongest with unemployment rate of about 5 percent. Murphy examined oil prices, which help consumers when they drop but can trigger inflation. Dean outlined the Consumer Price Index.

“The Fed looks for a CPI at around 2 percent,” she said.

Murray, who has his Ph.D. in monetary theory, noted that Saint Rose has never taken part in the competition and none of the team members had ever taken an economics class. Not only that, but the team from Albany traveled farthest for the early round.

“All of that makes it more fun!” he said, adding that the group planned to stay in a hotel Sunday before Monday’s return to Maiden Lane. 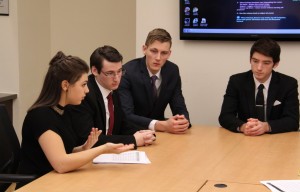 Preparing for the finals: Dean, Levine, Lipinski and Murphy fine-tune their plans in advance of the final round competition of the College Fed Challenge.