by Jacquelyn Richards on July 4, 2014 in All About Saint Rose · 0 Comments

As the three-day holiday weekend approaches, fireworks, parades, free concerts and more fill every corner of the city — and the countryside, too. I was hoping to go home and visit friends and family members but let’s be honest, Washington, DC is arguably the most patriotic place in America to celebrate Independence Day, and I wasn’t going to miss out. On account of the holiday, I am going to be heading out a little early today, since I know there will be a lot of people/traffic, where I plan on going. Today entails spectacular fireworks to moving musical performances to family friendly festivals and much more – as long as Hurricane Arthur doesn’t spoil the fun.

A great start to my full day of Fourth of July events will be the America’s National Independence Day Parade, which features marching bands from all over the country, military and specialty units, patriotic floats and VIPs. Next, is on the U.S. Capitol’s West Lawn with “A Capitol Fourth,” a free, 90-minute musical extravaganza. The concert features the National Symphony Orchestra and is capped off with a rousing rendition of Tchaikovsky’s “1812 Overture” complete with live cannon fire provided by the United States Army Presidential Salute Battery. Lastly, the Fireworks show that I have heard is an once-in-a-lifetime event.

Speaking of celebrating the birth of American Independence, I recently had the opportunity to enjoy one of the more unique perks of being an intern for Legal Services Corporation. On Tuesday President Barack Obama spoke on the economy in Georgetown Waterfront Park, in which I attended! It was a very surreal experience, and one that I was glad to share with my fellow interns and colleagues.

I found out about his speech on Monday and it was confirmed, later in the day, that we could attend. The morning of, Tuesday July 1st, on my hour-long commute to work my nerves were in my stomach which made it very hard to concentrate and not be giddy in the office. It was one of those moments when I really started to realize that everything I had endured in my 23 years on Earth was leading up to this moment.

It felt like a dream, and I have LSC to thank in playing a crucial role in that moment!

When the interns and I walked towards the line, they had us go through security and then we had to wait. It was only 90 degrees but felt like 97 and humidity was up 53%. The doors opened at 12:30, I left my office at 12 and sat in the blistering sun for two hours and fifteen minutes before the President showed up. But it was completely worth risking an asthma attack. Pictures can’t really do justice to how amazing the space was decorated or the amount of unseen high energy that everyone was feeding off of.

I also met a lot of politicians. One politician in particular — Mayor of Washington, DC — Vincent C. Gray. I told him who I was and that I was interning for Legal Services Corporation. He and I began talking about how much he appreciated the work of LSC and how much they have helped low-income Americans. In that moment I couldn’t be more proud to be with LSC, a nonprofit corporation whose mission is to promote equal access to justice in our Nation and to provide high quality civil legal assistance to low-income persons. 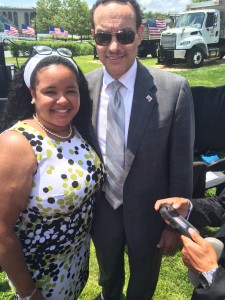 Mayor Gray and I at the Georgetown Waterfront Park waiting for President Barack Obama.

After President Obama spoke he went to shake everyone’s hand who happened to be in front, I was one of them. Prior to making my way towards him, in a split second, I made the decision to give him my business card. I was completely terrified that secret service might smack it out of my hand or he would say he couldn’t accept it, so I concocted a plan.

Right before he came to shake my hand, I slid my card in my hand, leaving my card in his hand. (that’s a lot of hands) Then he stopped, took a moment to look at my card and this conversation happened: 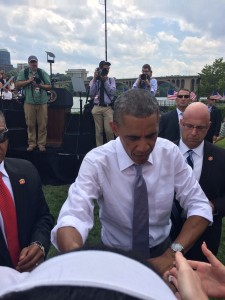 Sliding my card through a handshake to the President. (I’m wearing the white bandanna)

I had a conversation with the President of the United States of America! Ha! The weird part is, I was completely free of nerves when he and I were speaking. My nerves returned after he moved on to shake the hands of everyone else. I kept saying to myself, “Oh my goodness, I can’t believe I did that.” It was the highlight of my day, week, month, year and life! Again, the pictures don’t do justice for what went on that afternoon but I hope you enjoy looking at the photos and watching the video ( IMG_0921.)

Tomorrow’s post is a summary about last week since I didn’t get the chance to write a blog, and that way I can catch you all up of what I have been doing with my time. Have a great and safe holiday everyone! 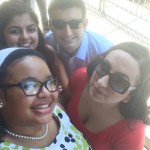 Interns Silove, Nupur, Joe and I waiting on line. 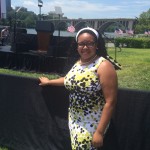 Waiting for the President! 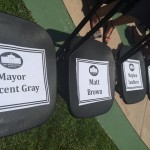 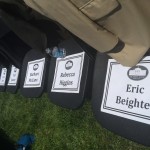 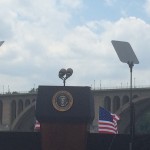 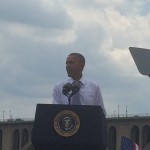 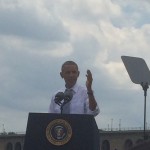 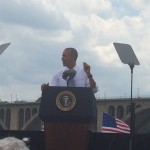 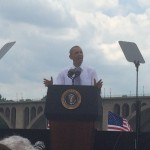 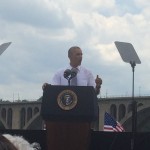 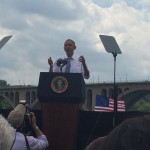 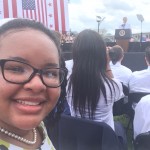 Selfie with the President 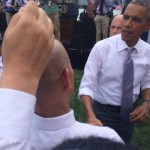 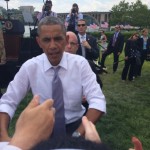 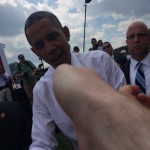 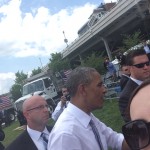