A first-year teacher not boxed in by convention 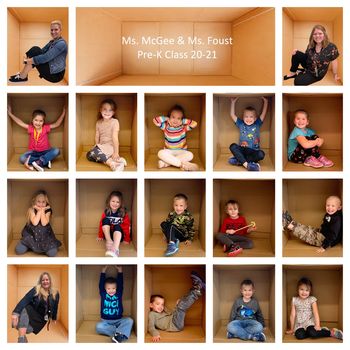 On picture day in Alaina Foust’s pre-K class at Joseph Henry Elementary School in Saratoga County, the students were called up one at a time to pose in a big cardboard box.

“The rest waited at their desks. We asked them to play with crayons, but they watched. They were way too excited,” said Foust ’19, G’20. She, like the students, is experiencing school this year under unique circumstances.

Her strategy for seeing that the school’s youngest learners got their class picture, despite the constraints posed by COVID-19, was so widely shared on social media that the “TODAY” show featured it in a web story. Next, “Parents” magazine called to interview Foust.

“They asked what life is like in our classroom. I told them how we want to make the whole experience fun,” said Foust.“We try to think positive when everything in the world seems so negative.”

Foust is a special-education teacher in the Saratoga County town of Galway. Joseph Henry is not just her first full-time teaching job but the first school she attended. Teaching there this year means coming in an hour early to log in to instruct the 3- and 4-year-olds with special needs staying home during the pandemic; then co-teaching the full class (seeing that everyone sits six feet apart and wears masks) and logging in again at other points to work with the kids learning at home. Also: Foust, who earned her Saint Rose elementary special education degree in 2019, is finishing her master’s in educational psychology this semester.

So figuring out a socially-distanced alternative to the usual group class picture was yet another riddle for her and co-teacher Danielle McGee. When they researched ideas, giving each student a photo op in a big box sounded promising. Foust found the perfect box.

Unlike class pictures taken in rigid rows, each child got to do his or her own thing. Pushing against the box with various limbs was popular. A few kids simply put their hands under their chins and grinned. The teachers also posed, with considerably less room to do anything creative.

“We were joking we were going to ship them all to California,” said Foust. “They laughed, but they don’t know what California is.”

McGee used Photoshop to turn the individual squares into one big cubby. The kids liked it, Foust said, but since they had never done a class photo, they did not see the result as unique. The adults did, which is how it ended up on the “TODAY” website and led to an interview with “Parents” magazine.

Long interested in teaching, the Galway native set her sights on third through fifth grade. But Joseph Henry, where she had substitute taught, needed a pre-K special education teacher to start in September.

“Once I started teaching pre-K, it was a total game-changer. They’re little sponges who take in so much,” she said. “Now I only want to teach the younger grades.”

The logistics of doing so during the pandemic have been complicated, she acknowledged. But she feels her Saint Rose background has prepared her to adapt – that includes finding alternatives rather than cancel class photos and other milestones.

“The kids don’t understand now,” she explained. “But once the coronavirus goes away, and the kids look back on their class picture, they’ll see it’s different from any other picture they’ll have and understand what made it such a different year.”