As he prepared to leave his teaching post in Atlanta to join the Saint Rose faculty in 2018, Dr. Thomas Murphy received an email from Sister Sean Peters, from the College’s office of spiritual life. She requested a meeting.

So, soon after arriving on campus, Murphy and several other new professors, gathered with Sister Sean in the cozy library of the Interfaith Center.

“She asked us to think about how we could serve the dear neighbor as part of our work at the College,” recalls Murphy, an assistant professor of counseling who is a licensed clinical mental health counselor. “I’d never heard that before.”

For several decades Sister Sean CSJ, an alum who worked in teaching and administration at Saint Rose, guided students and colleagues to identify the needs of those around them and respond. She spearheaded volunteer efforts on campus and around the region, and led several service trips as far away as Honduras. The mission set forth when the Sisters of Saint Joseph of Carondelet founded the College, in short, became her mission.

The talk with Murphy and his new colleagues that day was brief, he said, and Sister Sean left it at that. But her words stuck.

“I really understood what Sister Sean was asking. As a clinical mental health worker, the heart of the job is the dear neighbor,” he explained.

He offered his services to Give An Hour, a national network of mental health professionals who pledge at least an hour a week, at no charge, to military veterans and their families. It is a population, Murphy notes, that is often reluctant to seek help. When they do, they frequently find that there are not enough experts to respond to their particular needs. Also, their health insurance sometimes caps the number of visits offered. Give an Hour has no such limits.

Sister Sean could not have planned a better alignment.

Murphy, who has his Ph.D. in counselor education, is uniquely qualified to assist people from the  military. In addition to being a licensed mental health counselor in New York, his long list of credentials include EMDR clinician, or eye movement desensitization and reprocessing, a treatment that promotes healing by asking patients to experience and process their painful memories.

Last spring, two veterans with trauma histories saw Murphy’s listing on the Give an Hour website and reached out. Murphy has met with each veteran, once a week, since then. To offer his services virtually during the pandemic, he also trained in telemental health.

Though the progress thus far is hard to gauge, Murphy believes he is helping clients build the foundation they will need to get past their struggles. It is work that he expects will take time.

“I’ve told them that as long as they want to see me, I’m here,” Murphy said. “They’ve said ‘I feel like I’ve taken advantage of you, but I tell them it’s my choice and my honor to help people who have given to our country.” 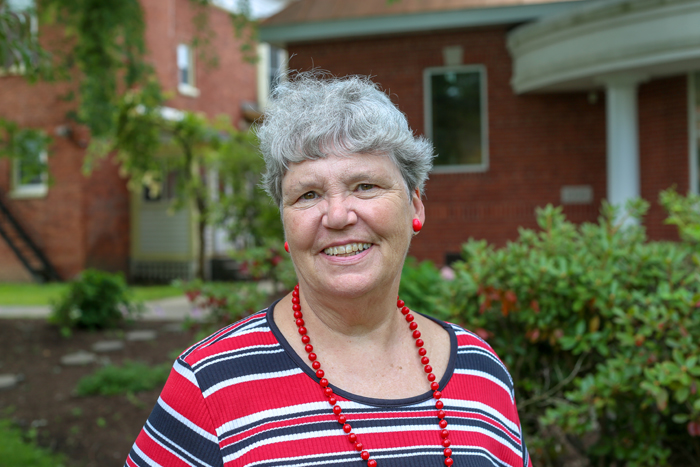 Sister Sean Peters, CSJ, asked Murphy what he could do to help the dear neighbor.

Also, his work with Give an Hour is consistent with the work of the College graduate counseling program – which emphasizes advocacy and social justice. Murphy teaches clinical counseling skills and disaster, crisis and trauma counseling, among other classes.

Students in the program go on to counsel individuals, lead groups, become career counselors, school counselors or licensed psychotherapists in clinical practice. Some focus on assisting members of the military.

Now in his third year at Saint Rose, Murphy has gained a great deal from interactions with colleagues in his own program as well as those in communication sciences and disorders. He has collaborated in research and in teaching with many of them.

He also invited Sister Sean into a class to contribute a sister’s perspective on death. It all started with that first homework assignment – help the dear neighbor — a request she reiterated in an email after they met. In 2019, she moved on to join the Sisters of Saint Joseph leadership team in St. Louis, Missouri. But Murphy, and doubtless many others, continue following through on what she asked.

He obtained his New York license to practice mental health and signed on with Give an Hour. He supervised interns assisting on the state Office of Mental Health Covid-19 help line, and provides continuing education to counselors who work with those with developmental disabilities.

“I told her my primary focus would be tending to the needs of the time with the dear neighbor,” he explained. “It was my introduction to the Sisters of Saint Joseph and to Saint Rose and Sister Sean.”