Already a Winner, Professor Barbara Ungar’s Latest Poetry Book ‘Save Our Ship’ is Out 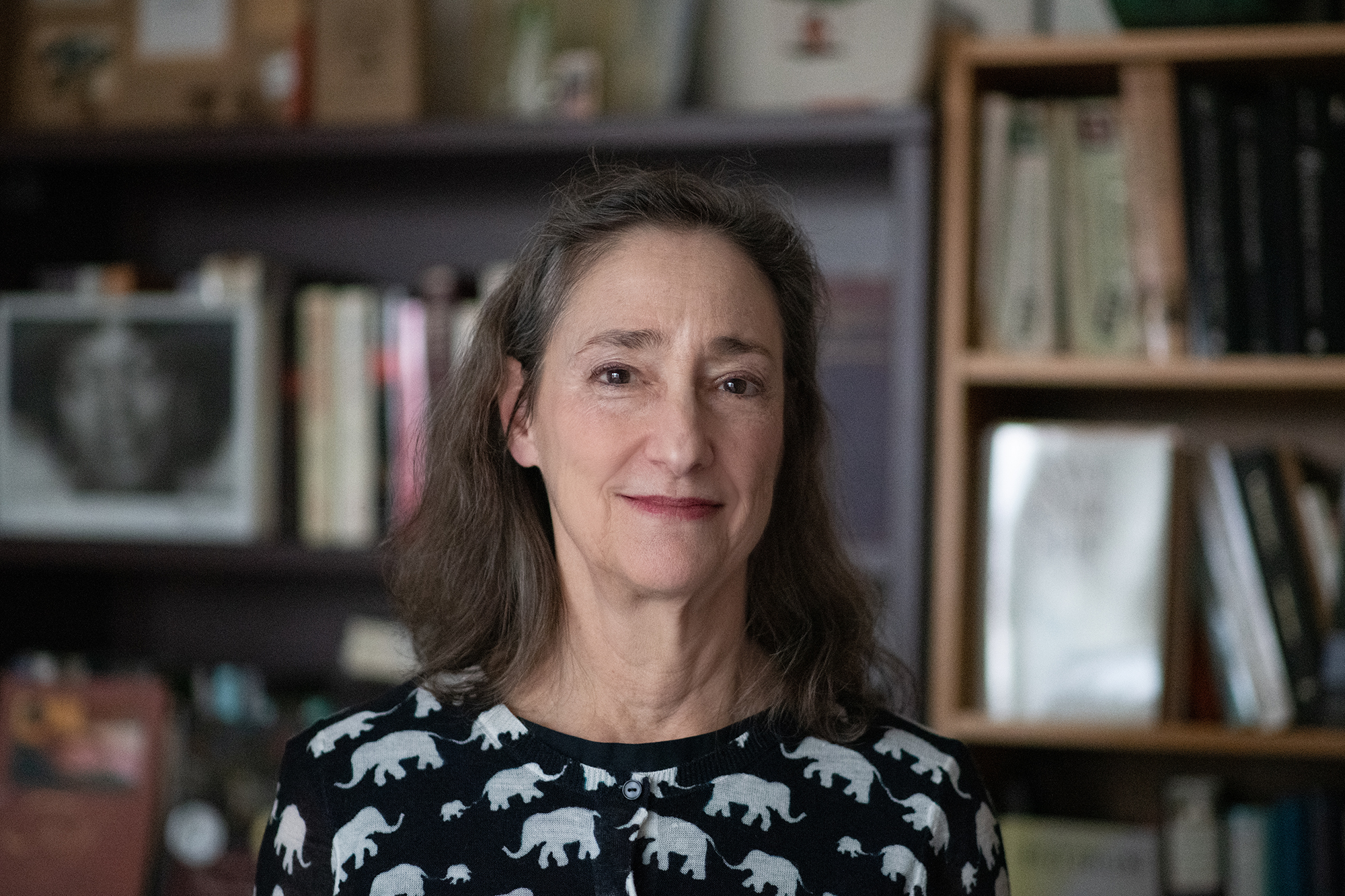 Now, Ashland has published “Save Our Ship,” a work of 57 poems. It is also available from SPD, Small Press Distributors, which included it among its recommended books of the month – and listed the work #6 on its December best seller list. Making the release even sweeter: Kirkus Reviews, which already gave “Save Our Ship” a starred review, has named it among its Best Books of 2019, one of only seven independent poetry books included.

Reviewers consistently cite Ungar’s talent for summoning urgency about environmental disasters and other grave matters, while also nailing truths about the more mundane.

“Overall, Ungar suggests that language and memory are futile attempts to impose order on the chaos that surrounds us,” said Kirkus.

“As you live with these witty, satiric, and at times wrenching poems, you will find that their humor darkens while their sadness grows strangely lighter,” said Mark Snyder, judge for the Ashland prize.

Ungar, who joined the Saint Rose faculty in 1995, has consistently enjoyed success as a poet as she has taught. Her 2015 “Immortal Medusa” won the same honor as “Save Our Ship,” a Kirkus Reviews Best Books of 2015.

She began writing poetry at age 6 or 7, captivated by Edward Lear’s “The Jumblies” and other poems her mother read to her – many, she says, she can still recite.

“As soon as I could write, I started making little rhymed poems and illustrating them, just like our ‘Big Book of Children’s Poetry,’” she recalls. “Most of them were about elves and fairies, for some reason. The first poem I ever wrote was called ‘Oscar the Clown,’ and the first one I had published (in a student magazine, in third grade) was called ‘Rain.’ Sadly, I can recite most of those, too.”

Here is more about Ungar’s process, her latest work and impact as a professor:

“Save our Ship” touches on some pretty heavy topics. Is that why you think it’s been so well-received?

No, not particularly. I think there are heavy topics in all of my books: death, AIDS, 9/11, divorce, and so on. I just think I’ve been at it for a long time, and gradually, with each book, learned how to do promotion a little better, while at the same time expanding my network of other poets and people who love poetry. Maybe I’m getting better, too.

What value does being a published poet bring to your students?

There’s a poem in “Save Our Ship” called “Dear Bill” that is an elegy for one of my poetry teachers, William Matthews. It’s written as a conversation with him, with me repeating all the things he said in class that have remained with me, and are now part of me. The handing on of the tradition of poetry is very personal, so I pass on all the things I’ve learned from my teachers to them. I studied with Frank Bidart, who worked with Robert Lowell and Elizabeth Bishop: what he passed on to me, I pass on to my students.

I hope it also provides an example, so they know they, too, could be published one day. I love what I do; that’s why I do it. There is very little reward in poetry other than that, so perhaps I can encourage them to devote themselves to doing whatever it is that they love. I am also a stickler about the mechanics of writing—grammar, spelling, punctuation, all that stuff they couldn’t care less about. But if they want to be taken seriously in the publication world, it is simply a given that their work be error-free. I try to impress that upon them. I find the most success with this in creative writing classes, where students are most invested in their own writing. They will argue over commas in one another’s work; I find that immensely gratifying.

Conversely, how does teaching influence your work? What if you pulled an Emily Dickinson and simply retreated to work? (No papers to grade!)

I love being in contact with young minds. When I first came to the College, I felt like a slightly older peer; that changed over the years to feeling more like a peer of their parents; now I’m closer to their grandparents. The farther away I get from their generation, the more I have to learn from them. They will spontaneously translate things for me: abbreviations, music references, online references, etc. I hope they help keep me young.

I also love the work that I teach; it’s important to me to teach literature, not just writing, so that I am constantly rereading the classics. For example, my last book included poems about teaching the “Odyssey” and Rumi and (Ungar’s own) “On a Student Paper Comparing Emily Dickinson to Lady Gaga,” a poem that the Kirkus Reviews said should probably never have been written, but that somehow I’d managed to pull off.

Speaking of Emily Dickinson, I wrote my dissertation on her, and she remains one of my lodestars. I look forward to retreating to work like that one day, as soon as I can afford to.

When do you decide it’s time to compile your poems into a book?

It’s hard to say exactly. Once I get to about 40 to 50 poems that seem to hang together in a group, I start to find an order for them. I like to make books: this process might go on for several years. As the manuscript takes shape, I edit out weaker poems, add stronger ones, and once I have a theme or trajectory, even write poems specifically to fill in the gaps.

In a way, this book was easier than most, because it’s an abecedarian (alphabet) book: so I needed at least one poem for each letter of the alphabet, though there are as many as five (S-poems); J and K took a while; X was the most difficult. (It was only after the book was done that I remembered one of the poems I loved being read was Edward Lear’s “Nonsense Alphabet,” which was probably how I learned to read.)

Basically, I start sending the manuscript out, usually prematurely, and until it’s picked up by a publisher, I keep tinkering with it. My first manuscript, “Thrift,” took 16 years to get published, though it was a finalist or semi-finalist in dozens of contests; by the time it came out, there was I believe one poem left in it from the original collection, which was my M.A. thesis. Now I average a collection every four to five years.

The poems in “Save Our Ship” range from commentary on political discord to your opinion of the man bun. Does this spectrum reflect your current thinking, or do you think it’s important to sprinkle humor in with the sad and serious?

Both. My current thinking veers from the apocalyptic to the humorous and back again. It’s probably an Eastern European Jewish survival mechanism: to make jokes about the most dire things helps you to endure them.

I do think humor is important; people already (think they) hate poetry, so humor can be a way to draw people in and to make the whole experience enjoyable. This is perhaps my least funny and most serious book to date (thank God for “Man Bun Ken” and “Now We Are 15”).

But the next one, “EDGE,” is even worse; it’s all about the sixth extinction, inspired by the EDGE (Evolutionarily Distinct and Globally Endangered) List, which is not at all funny. But as I continue with it, I’m managing to work in some humorous poems about my own aging and mortality, so I hope they leaven the whole. In general, I think people are in denial about death, so until we can each confront our own personal death, we won’t be able to take action to stave off global extinction. That’s why I was thrilled to write “How to Age Gracefully,” because it fits the theme of the collection, but it’s also funny; it’s me laughing at myself.

← Saint Rose Business Student Returns to his Love of Opera and Austria
Club Focus: Q&A with the President of Brothers and Sisters in Christ →