The Food Microbiology class at Saint Rose recently left to explore Lyon, France! Updates and Pictures of our adventures will be uploaded in the coming weeks, so feel free to keep checking to see the exciting adventures of the class. However, we first wanted to share some of the other awesome stuff we have been doing for the class this semester. 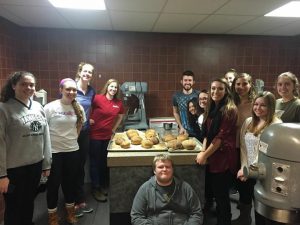 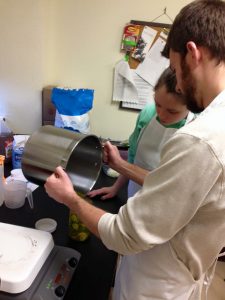 Every week we got to watch cooking shows like Alton Brown’s “Good Eats” and “The Mind of a Chef”. We would see how they prepared certain foods and then we would all meet in class to try and create the same edible masterpieces. Throughout the first half of the semester we made simply sweet jams, killer varieties of pickles, breads, yogurts, and finally we got to brew and can beer! The midterm was a “Bake Off” akin to the Great British Bake Off showdown (if you haven’t watched this show I would highly recommend it!) where everyone got to prepare a microbiology related food and present it to a panel of judges. The results were kept secret so we never found out who had the “best bake” or worst, but everyone won since after the judging the class got to feast on everyone else’s creations. Everything was delicious, homemade, and a lot of fun to eat! 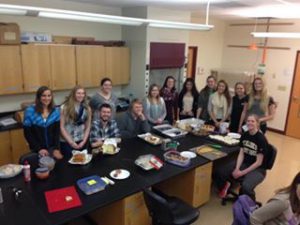 In March, the class got the inside scoop to the distribution and consumption part of the food process. First, we took a trip to the Saint Rose Dining Hall to learn about the health safety procedures in place to protect the consumers. They gave us a peak into the standard operating procedures (SOPs) they perform every single day. We also walked down to our local Price Chopper (now Market 32) where they taught us some SOPs related to the distribution of food products. 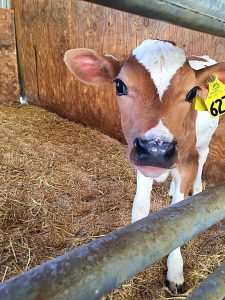 We also took a trip to a local dairy farm to learn about the production steps of the food process. We got a tour of the entire farm. The cows are kept in a shed where they spend most of their time. The pregnant ones are separated in a different location. The baby calves also have a separate barn and move to different locations as they age. The farm grows their own food for the cows and stores it for the winter months. The cows who are producing milk are taken to a separate building to be milked twice a day. Sterilization is very important here in order to increase the safety of the milk. The equipment is all cleaned and the utters are sanitized before the machine hooks up to the cows.

The milk is also tested for microbes on site to make sure it is safe and meets government standards. The milk is tested when it is picked up by a tanker truck and this is very important because the farm could end up paying for a whole truckload of milk if their milk spoils the entire batch in the truck. The sanitation of the farm is key in order to avoid cow illness and milk contamination. 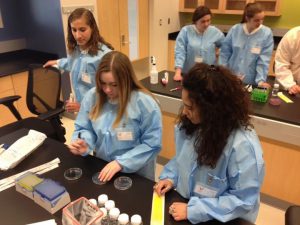 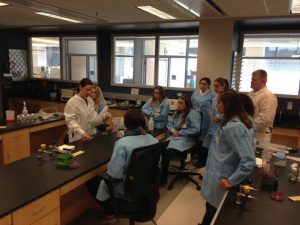 During a three week period between April 6 – April 20, 2016 the class was able to visit the NY Food Safety Labs in order to learn about the processing and testing of food. They showed us some techniques for testing and identifying a pathogenic bacteria within a food item. There are many biochemical tests in order to differentiate between bacteria. The more tests you perform, the more accurate your conclusion will be.

Next they took us through the standard procedures for the testing of milk. We learned the secret handshake, which is a technique for homogenizing the milk sample. We performed a coliform count, a bacterial count, and tested samples for antibiotics. Most of the milk that is produced is pasteurized, but raw milk can also be produced, which is not heated to kill off harmful bacteria. Raw milk testing is more extensive as it must be safe for consumers.

We also learned how they go about solving food illness outbreaks. A bacteria is linked to a specific outbreak by using Pulse Field Gel Electrophoresis (PFGE). This technique separates the bacterial DNA into bands and this pattern will be specific to a specific outbreak. A new technology is allowing the sequencing of an entire bacteria’s genome which will uncover vast knowledge about specific strains of bacteria, but this is much more expensive and time consuming.

And now we are off to Lyon, France! Stay tuned for more posts about our trip to see what new adventures we get into in the coming weeks!

*This post was co-written by Food Microbiology students Audrey Moylan and Jennifer Gundrum.