From Saint Rose to Moody’s

Sometimes our homepage stories are worth sharing with our blog audience. In this case, we are happy to share former Saint Rose blogger Yelfri De Leon’s success! 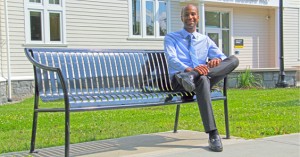 Yelfri De Leon ’14 majored in business with a concentration in finance.

When Yelfri De Leon ‘14 decided to attend college in upstate New York, he never imagined that four years later he would be returning to New York City to work at Seven World Trade Center. Just two months after graduation, he has done just that: landed his “dream job” at Moody’s Corporation in New York City. De Leon’s journey is no accident; his hard work and determination have driven him to success.

“He is very well organized, very self-motivated,” said Dr. Dandan Wu, assistant professor of finance at the Huether School of Business. Wu speaks of the activities De Leon was involved with as a student, his multiple internships, and his semester abroad studying in London. “He excelled and was in the top five percent of my classes.”

Born in the Dominican Republic, De Leon moved to Panama City when he was four years old. At 13, he moved with his family to the United States, where he lived in New York City until attending The College of Saint Rose. At first unsure about attending a small, private college in Albany, De Leon visited campus and, in his words, “I saw how friendly the people were, the faculty members. I was like, ‘Wow, this is the place for me.’”

Originally an undeclared major, De Leon quickly decided that business with a concentration in finance was the path for him. He became very involved in campus life: Student Association, Student Events Board, Spectrum, The Chronicle photographer, and ALANA is Leadership are just a few of the activities De Leon participated in.

De Leon credits his activities and academic experiences for getting his dream job so quickly. While the Huether School of Business requires one internship, De Leon completed two — the first at the New York State Office of the State Comptroller as an auditor, the second as a credit analyst at the New York Business Development Corporation, where he accepted his first position post-graduation in May.

Now, two months and two weeks after his Class of 2014 commencement, De Leon has started work as a Financial Data Analyst at Moody’s. He describes the position as a “dream” due to its entry-level opportunity, location in New York City, diverse company culture, and because of international business relations. In his role, De Leon will be speaking Spanish, his first language, on a daily basis. With time, Moody’s will likely send De Leon on to become a Certified Financial Analyst, further completing his career aspirations.

For now, De Leon is thrilled for his present opportunity. “Who would’ve thought that I’d be working at the World Trade Center? Not in my wildest dreams.”