by Alexander Lawrence on October 30, 2015 in All About Saint Rose, Golden Knight Spotlight · 0 Comments 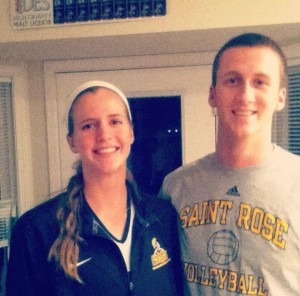 What set SR apart from other schools: “I thought the campus was nice. It was a small well-kept campus in a city. The classes were small, so you get that one-on-one attention with professors. When I visited here the professors seemed well informed and loved their jobs.”

Why SR Volleyball: “Most of the other schools I was recruited by were division III schools, but I chose this school’s program because of the high level of competition. Also on my official visit when I stayed with the team it was a good atmosphere and I felt I fit in the best with them.”

Most memorable moment or game: “Probably last year when we made the NCAA tournament. It was really great because we didn’t think we’d make it, since we’d just lost to Adelphi in the 1st round of the playoffs. Erica (Ziskin, teammate) and I were watching the selection show and studying in the library when we saw Saint Rose got picked as the #7 seed.”

How you got involved: “I was 14-years-old. My first year of high school I tried out for the volleyball team and made the varsity team. Sophomore year I started playing club volleyball and that’s when I made my decision to continue. My mom played college volleyball as well at Rutgers University and my brother did sports in high school. My mom definitely helped influence me on my decision and I started to love volleyball just as much as she did.”

Do you have a saying or motto you live by: “Work hard, play hard.”

Where you draw your inspiration from: “From my teammates because when I’m on the court I’m playing the best I can for my teammates.”

How do you prepare before a game: “I watch film on the opponents to see where they’ll be hitting the ball and study their defense to see where I can score points. The night before a game I get a good meal in and a good night’s sleep. I also listen to music before the game.”

What are you looking to accomplish this year: “Our goals as a team right now is to focus on games one at a time and hoping to make the NE-10 tournament.” 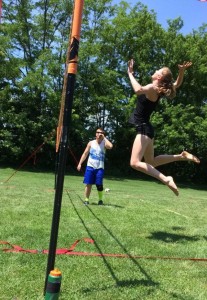 Jen playing in a coed tournament

My Comments/ takeaway from the interview: Jen Gundrum is a student athlete at The College of Saint Rose with a passion for her major biochemistry. She is very committed in her sport and does all she can to further her education and excel on the volleyball court. “First-year we had a very strong team and played well throughout the season. We peaked earlier on in the season and when playoffs came our weaknesses were exploited by other teams. My second-year was weaker and stronger in certain ways. The mentality and team culture was very strong and we overcame some bumps in the road to make the NCAA tournament. This year we have a lot of talent and potential on the team. Our main issue was finding our team identity and have had to make adjustments down the road. I feel confident going forward that we can achieve our goals and take them even further,” Gundrum said. “All the success I have is owed to my teammates. I have learned how to work with different types of people attempting to achieve the same goals and aspirations as me. We keep the intensity going in practice. Volleyball has helped me develop friendships off the court and have people I can rely on. We’re like a family,” Gundrum said about her team’s influence on her. Jen is very thankful of her team and credits her success to them. During my interview with her I quickly learned that she is all about giving and not taking. She works as hard as she can not only for herself, but for her teammates as well. She is a very energetic and smart person. She knows the aspects of volleyball inside and out. She is one of the better personalities I’ve seen on this campus and for Saint Rose to have a person of her caliber is a huge boost in many ways. Jen is a very humble woman, but don’t let that fool you because on the court she will prepare herself as best as she can to pick the opposing team’s defense apart. Good luck to Jen and the rest of her team this weekend in their two home matches, Friday night at 7pm and Saturday at 1pm in the EAC gymnasium! #gogoldenknights. 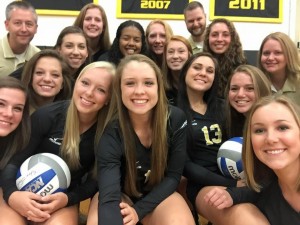 ← #TBT – Remembering My First Saint Rose Experience
LinkedIn: What is it and Why is it Important? →