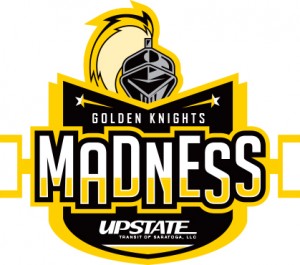 No idea what I’m talking about? Well, it’s the first year of competition, so let me explain.

All 18 Saint Rose intercollegiate teams are in a friendly fundraiser competition in the style of the NCAA’s March Madness. While no actual games will be played, teams are in match-ups to see who can raise more money for their own team. As teams advance they will make their way toward the championship round and the opportunity to win a grand prize.

The first round kicks off today and lasts through March 23, followed by the “Elite Eight” round March 23-30. The “Final Four” is March 30-April 6 and the final championship match is April 6-8.

Play the audio clip below to here the selection show announcement!

To make a donation toward a team you are rooting for, click here. For more information about #GoldenKnightsMadness, visit gogoldenknights.com.

← Being a Biochemistry Major
Spring Break →