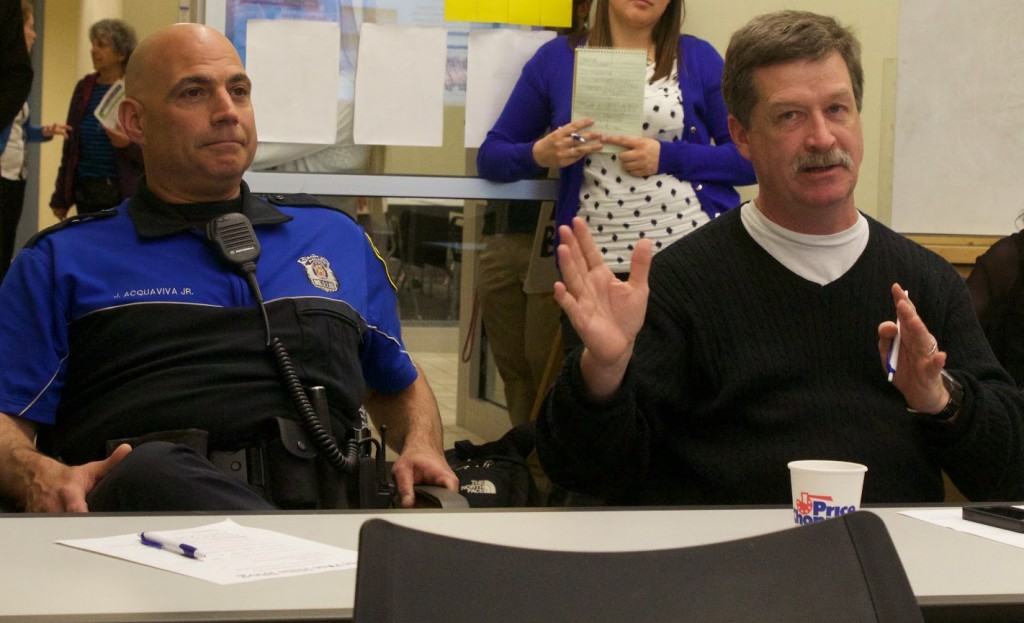 A Pine Hill Blog reporter looks on (background) as readers weigh in on what they would like the Saint Rose-written news outlet to cover. Officer Joseph Acquaviva Jr. called for a continued emphasis on quality of life issues, while reader Patrick Hughes suggested more hard-hitting fare. (Photos by Adriana Rosales)

Officer Joseph Acquaviva Jr., of the Albany police department, sat with more than 20 city residents and Saint Rose journalism students recently at the Pine Hills branch of the Albany Public library to recommend story ideas for The Pine Hills blog, the College’s student-produced publication that appears on timesunion.com. Since its launch in 2010, the semi-weekly news outlet has produced 400-plus articles devoted to the projects, problems and achievements of the diverse and busy neighborhood that is home to the College.

On this night, Acquaviva suggested some fresh stories on efforts to slow the traffic on Madison Avenue, eliminate graffiti and littering and other matters a neighborhood beat cop worries about – and newspapers cover.

“People want to know what’s going on in the neighborhood. And word of mouth sometimes isn’t enough,” said Acquaviva. “Having someone write about it could get the word out.”

The occasion was the third annual meeting Saint Rose advanced journalism students hold as part of the curriculum to invite Pine Hills residents to discuss what they would like to read on the blog. To Acquaviva, city council members, neighborhood association members and businesses, the student-driven news outlet is indistinguishable from a professional newspaper.

The blog gets the word out about businesses such as Paul’s Garage on Ontario Street, the pothole patcher the city recently purchased and the new baseball coach at Albany High School. Its virtual pages also carry news that isn’t exactly light. One recent story. for example, described  the outcry after Donald Ivy died soon after police Tased him.

Some readers appreciate the coverage so much they asked for the territory to be expanded – something that is not in the works. 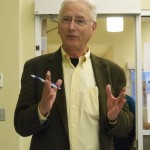 “I try to remind myself that I’m serving a bigger purpose when I’m writing an article to be published,” said one blog reporter, Vanessa Langdon, a sophomore communications major with a concentration in journalism. “It’s more than a simple assignment that I’m receiving a grade for. I have to make sure that what I write helps those who read the blog.”

She and the rest of the staff are expected to do far more than just write articles. They are expected to fan out into the neighborhood to find stories, identify sources and follow up. The editing process can be stringent. 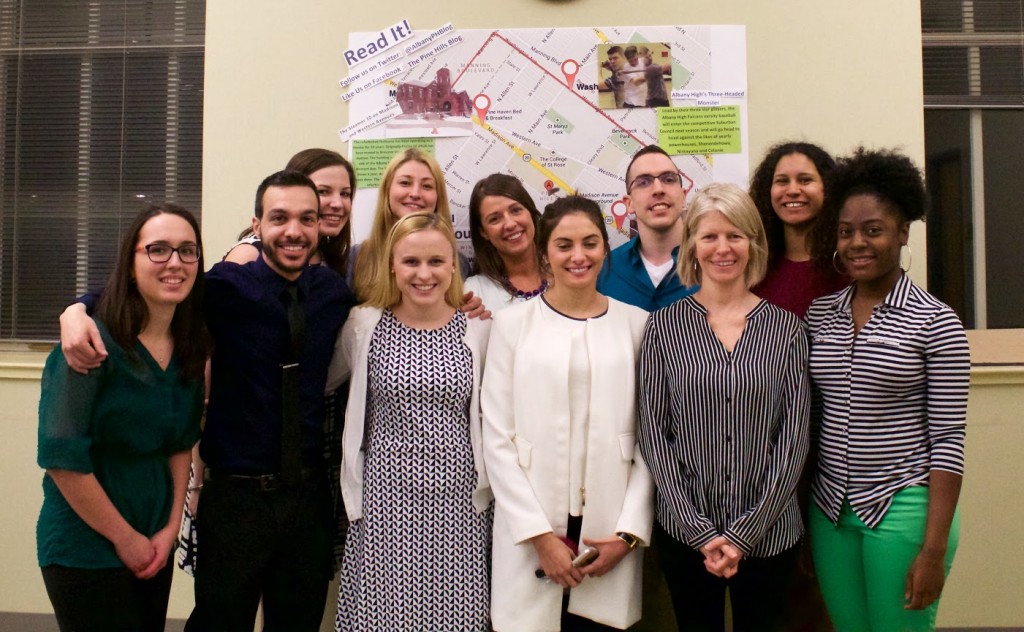 Masthead: Many readers may not distinguish The Pine Hills blog from a professional newspaper. That is the way Associate Professor of journalism and blog editor Cailin Brown (second from right front row) wants it.