Have you found your calling?

If you haven’t, don’t stress out! It took me 2 years of searching to find mine.

Two years ago, I was dead set on becoming a journalist. I wanted to work for the NY Times and be star editor.  That did not work out well at all. The cold, hard reality hit me when I got to Saint Rose and sat down in my journalism class in freshman year. I was a little shy freshman who didn’t know anyone and just wanted to fit in. I never spoke up in class and kind of kept to myself. No qualities that a journalist possessed. What was I thinking? It was definitely not for me.

(For those of you who are journalism majors or looking to be one, we have a wonderful program here. The classes really challenge you and I’d encourage anyone who wants to write to do it! You even get to contribute online to the Times Union. We also have photojournalism, which is pretty awesome if I do say so myself.)

Throughout my two years here, I have struggled to find my place in the world. When I switched my major to forensic psychology, I just knew that I was interested in criminals, and that I really liked psychology. While taking intro to criminal justice, I decided I wanted to work in jails. While taking criminology the following semester, I decided that theories were so interesting; maybe I’d be a researcher! The following semester, I learned about courts, and quickly decided that I hated learning about the law. It’s interesting and a great thing to know, I just realized I didn’t want to be involved in a court environment at all… and testify for people? Me who can barely talk to strangers without stumbling over her words? Forget it.

This year, I adopted a policy for myself. I would sit back and let everything just happen… so I did, and guess who found her calling? Ever since I was little, I wanted to work with animals. This summer, I started reading Origins by Darwin and various Jane Goodall novels. It made me so excited to see what people were doing to help animals. I never thought I could find something as exciting as that… but boy, was I wrong. While in physio psych. lab the other day, I found a field called ethology. It’s based in comparative psychology and evolutionary psychology and biology. You work with animals in their natural environment, and study them. You can also do reintegration programs, something that I have admired Jane Goodall and various teams around the country for. I just seriously am in love with Jane Goodall. No shame. She is my hero. 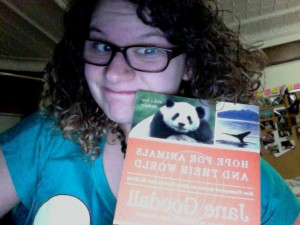 The book that started it all! "Hope for Animals and Their World"- Jane Goodall

While I still am not an expert on this field, I have e-mailed professors and asked them all I could. I would encourage anyone who is set in a field to learn all they can about it before pursuing it.
I would also like to tell you that it’s okay to not know what you want to do! As soon as I stopped stressing over it, I found something that totally fit me and everything I wanted to be. Do not stress over your future. The right thing will come to you eventually!

← Midterm Madness
Scenes from the road →