by Brian Goepfrich on February 16, 2012 in Study Abroad, The College of Saint Rose · 1 Comment

This weekend I was privileged with the opportunity to go to London as a part of the University College of Cork (UCC) International Relations Society. In London we participated with many people from different countries around the world. The Model United Nations (MUN) was an awesome experience for me that allowed me to work on my diplomatic skills as well as make some new friends.

During the summit I represented the Kingdom of Jordon, which before this summit I had little knowledge on. Throughout the week before the competition I spent a vast portion of my free time in the library researching the foreign and domestic policies of the Kingdom of Jordan. The UCC International Relations Society also helped me in my research by teaching me MUN regulations, as well as provided me with opportunities to practice public speaking. The help the I.R. society gave me tremendously helped my confidence when I got to the general assembly at the MUN summit.

At the summit I was assigned to the Food Agriculture Organization and spoke about situations happening around the world. My committee created draft resolutions in order to solve the food crisis in the Horn of Africa, and even the agriculture crisis Japan. It was great experience to see students my age finding real solutions to worldwide problems. 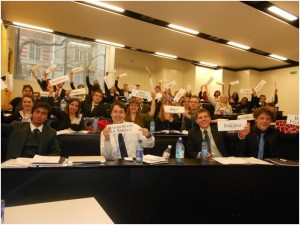 Aside from the MUN summit, I was able to travel in London a little bit while moving from the summit to my hostel. While walking the streets I briefly saw the Olympic Stadium, the underground, as well as pass by some historical buildings. We stayed at a hostel near Russell Square and the conference was held at the Imperial College of London just near South Kensington Station. The summit also organized social events. All together, I saw just a small part of the city of London, but I am sure that I will go back as soon as I can.

I’d love to hear comments or feedback from anyone else that has participated in something like this. I’m also open to answering questions!

← Favorite websites for when I’m stressed or need a laugh
So, you wanna be a Music major? →