Out With the Old, in With the New?

You don’t know me but I know you. At face value that sounds a little creepy but in actuality I know more about you than knowing your name or random fun facts. You’re the newly minted adults that are about to start the next chapter of your lives in an unfamiliar place. Right now if you’re anything like most college freshmen you are anxious yet excited, apprehensive but ready, and shy but eager to lay the groundwork for your college career. You’re standing on the brink of something exceptional, something that you’re only granted a few times in life- a chance to introduce yourself to people who don’t know your back story. The magic behind your first week on campus is that no one will know about that super weird thing you did in grade school and you have the chance to live life on your own.

Will you still feel the urge to call mom and dad occasionally? Probably, especially if you’re new at the whole doing your own laundry thing, but for what might be the first time- you’re on your own. There won’t be anyone telling you what to do or when to go to bed, instead there will just be you. I remember when I showed up as a freshman in 2011 (yeah, I’m old). I found the most exciting thing was I could hang out with my friends as late as I wanted and if we were feeling really crazy we would order late night take-out (order Chicken Joe’s right now, you’ll thank me later). This type of new-found freedom will creep into your everyday life, even if you don’t live on campus, because, well, you’re an adult now.

Speaking as a new alumna I have a few words of wisdom for the new group of Saint Rose students:
1) Do everything! Staying in your room sounds like a great idea but by trying out things on campus you can figure out what you like and meet people with similar interests. I was super afraid to join clubs my first year but I gathered the courage and ended up becoming heavily involved in student government by the time senior year rolled around. The bonus is that since a lot of people are trying out new clubs and activities no one will notice if you don’t come back the next week,so no pressure.
2) Get your stuff done when it works for you. What I mean by this is that sometimes you’ll want to do your assignments right after class and sometimes you’ll want to do them at ungodly hours of the night. Just recognize when you’re feeling productive and get the work done then because there isn’t sense at staring at a screen when all your friends are out on the quad. 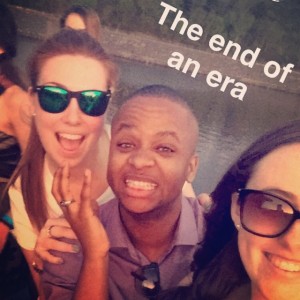 A shameless Snapchat with my friends Myles and Meghan while on the annual senior cruise. #Memories

3) Make memories. When all is said and done you won’t really remember that paper you wrote about William Penn in Colonial America History but you will remember when you took a break from it to go to the men’s basketball game with your friends (true story). I’m in no way saying academics aren’t important because hey, that’s why you’re here, but I will say I remember my friends and our hijinx way more than I remember anything else. Memories are important because they are something you’ll look back on with a smile and maybe if you’re lucky some embarrassment.

When I graduated in May I knew it would be hard to let go because college was the most rewarding and fun time in my life (thus far) and I really hope it is for you too. Remember that pretty much everyone is in the same boat as you and wanting to make friends along the way of their college career. If that isn’t reassuring enough to go out there and make college your own let me leave you with one last piece of advice: if for no other reason, make friends so you have people to eat with in the dinning hall.

P.S. I was so serious about ordering Chicken Joe’s. Get the Heaven Sub, maybe splurge on some deep-fried brownies, and enjoy the moment in your new home eating some delicious food.

Double P.S. I’m happy to say that I am now employed! I am working for TheBoot.Com, which I find very fitting now that I live in Texas, writing stories and helping with some editing. I’m covering for my new boss this week so once my life calms down I will write a “checking in” blog to further elaborate on my post-grad life. Spoiler: I’m adjusting better than expected.