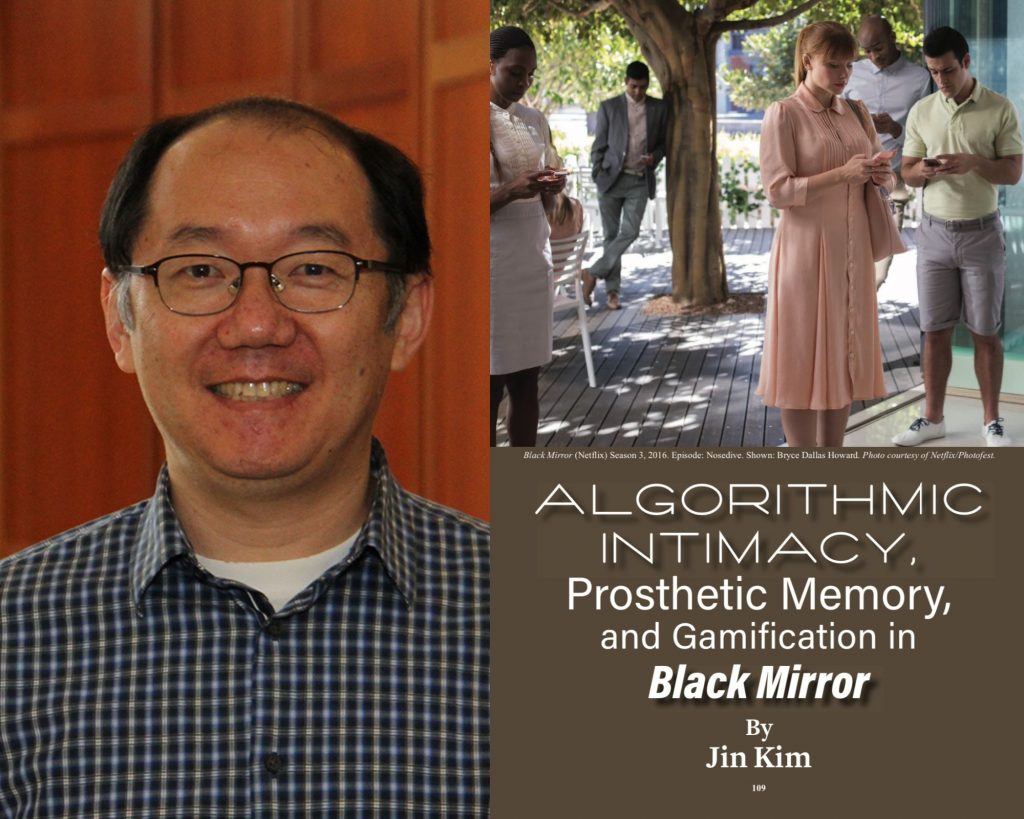 “Compared with other series, ‘Black Mirror’ takes a realistic approach to dystopic themes with a more focused angle,“ Dr. Jin Kim wrote in a paper recently published in the Journal of Popular Film and Television. “Specifically, it is concerned with media and depicts how digital technologies are saturated and weaponized in mundane lives,” he continued.

Kim, a communications professor at The College of Saint Rose, was inspired to write this paper based on discussions he had with his students about “Black Mirror,” a sci-fi television series on Netflix, and what it says about the increasingly complicated and dependent relationship between humans and technology. A fan of the show, Kim would often apply themes explored in “Black Mirror” to his coursework to evoke students to think critically about how media and technology affect their everyday lives. Then he wondered, could he elaborate on these themes and develop an academic paper?

For his paper titled, “Algorithmic Intimacy, Prosthetic Memory, and Gamification in Black Mirror,” Kim critically analyzes three episodes: “The Entire History of You,” “Nosedive,” and “Hang the DJ.” Although a fictional show, Kim argues that these episodes do not deviate far from reality and are emblematic of a society already tethered to media and technology.

We recently caught up with Kim to discuss his takeaways from his research and how he hopes to build on these themes in his classroom and for future projects.

What prompted you to write about this topic?

Two things: One, I love this show “Black Mirror.” Number two, I teach Intercultural Communication in a 400-level communications class. I teach many topics and one of them is how artificial intelligence affects us and the way we communicate with each other. The original notion of communication is with people: you and me, me and my other person. We are getting more and more technological. So, we have to use technology, media, and artificial intelligence. Many episodes touch on this concept, “what is communication?” Is it just speaking with people or does it also count as people with machines? The answer is yes and no. And, I wondered, can I elaborate on this issue? I worked on this project kind of like film critics and TV critics and developed it into a more serious academic work.

Which episodes did you focus on?

The “Hang the DJ” episode focuses on algorithmic intimacy. This episode is about a futuristic society and a dating app. It touches on intimacy, but how intimacy is built up based on algorithmic calculations.

“The Entire History of You” is about memory. My family and I recently went to Acadia National Park and had a fantastic time. All of our memories and photos are on our phones. On the one hand, the real memory should be in our head, but without the photos, it is hard. This episode touches on the issue of memories and inorganic memories, and making that decision between memory and inorganic memory.

“Nosedive” is on gamification. With social media, we rate. I rate you, you rate me, and really, these ratings are critical. This episode is about rating culture and gamification. It is like a game, but we are getting more and more hung up on the ratings. We feel the pressure of these ratings.

“Hang the DJ,” “​​The Entire History of You,” and “Nosedive” focus on intimacy, memory, and gamification and that is the backbone and structure of my paper.

What is the biggest takeaway from your research?

Communication could be understood flexibly. It is a little too broad, but it is not necessarily that communication between machines and people is purely evil. We are embracing it. We are using it. Demonizing mechanical or artificial intelligence would be a danger. It is not “yes” or “no.” I cannot analyze if it is good or bad. I mean, communication based on artificial intelligence provides many concerns and problems, but at the same time, they become our reality. It becomes more and more normalized and formalized using these things as a communication tool. Technology is convenient, but you have to think about many consequences such as privacy. Let me put it this way, the use of technology is a double-edged sword. That is a pretty basic, but general takeaway from my research.

One of the negative things is we (humans) become like machines. Machines are amazing. They are convenient. They make us on time. Is that the future of our lives? Communication through technology makes us more efficient and productive. That is the good thing. On the other hand, sometimes we miss something: what makes a human a human. What makes a human being is not always measurable or calculable.

How can you apply what you learned from your research to your classroom teachings?

In a way, this work was co-working between me and my students. Basically, I started this a few years ago when I taught Communication 483: Intercultural Communications. I was teaching theories on algorithms, artificial intelligence, and gamification. We were tackling it together and discussing these issues together. Those discussions were really good resources and the inspiration behind this project. One of the consensuses was that algorithmic intimacy, memory, and game theory are not futuristic, and it is already inside our world.

For example, we are using Uber and using ratings, and Uber gets all the details from us. It is not surprising at all. Based on this, my arguments about the new understanding of communication, are that it can be applied to our technology. Any type of technology for everyday mundane activities could be the new topic for my research.

Right now, I am working on many topics. One of them is a study on how college students perceive esports. This is an in-progress research project for an academic journal publication, co-working with Dr. Jaeyeon Hwang in the Huether School of Business.

Also, I am writing a book chapter on how students use technologies during COVID-19 and online classes. Last year, and last semester, it was pretty challenging, finding new dimensions for teaching and learning through Zoom and in online settings like that. It was fascinating and challenging. I would like to elaborate on what are the concerns and what are the promises from our own experiences. These are the two topics of research that I am working on: one on esports and one on use of technology during COVID-19.

Why is it important to explore themes in Film and Television? What impact does that have on the industry?

Two things: number one, it is popular.  Students love it. I have been using “Black Mirror” episodes because it touches on the topical. It touches on the current state of society. Students love it, consumers love it, and producers love it. Science-fiction is a key trope in contemporary culture. As a researcher, you can’t always follow what is popular, but it is not a bad idea. It is one way to connect between popular common senses and research themes. So, it is in a way, audience research and how audiences respond to popular culture. That is one angle. The second angle is, I like this work because it is a little bit ironic. On the one hand, in this article and “Black Mirror,” technology is cheered. On the other hand, even these episodes are critical and skeptical. Is it against the industry? Definitely not. The industry is multidimensional. On the one hand, it is pro-market, pro-commercial, and pro-technology. On the other hand, it is responsive to the concerns and critiques [of technology]. Working on this project, it touches on this irony.  The paradoxical relationship between the pros and cons and disadvantages and advantages. So, there is some room for flexibility in the industry.

← Meet Joelianice Feliciano ’22: Having internship experiences to get ready for the big game
Get to Know Saint Rose: Meet Amanda Bastiani →