by Michael Aurrichio on September 29, 2015 in All About Saint Rose · 0 Comments

Welcome back to campus for all the returning students and a HUGE congratulations to all of the first year and transfer students for surviving your first month as a Saint Rose Golden Knight! I hope the adjustment has been smooth thus far. You’re going to love it here.

For all the first year students reading this…hello! My name is Michael Aurrichio, I’m a junior and if you live on the west side of Brubacher Hall, there’s a good chance I helped you move in! For the second straight year, I applied to become an Arrival Assistant through Student Life!

Like I’ve previously mentioned, I live off campus now so I could move in basically whenever I wanted. I wanted to move in before the last major summer event that way I could get in “midseason form” with giving tours. (My friends think I’m ridiculous when I go into the art of giving tours, but there are many components…blog maybe?)

I moved into my new Albany home around August 20th so I had ample time to get everything ready for the new coming school year and to get away from my retail job back home. It really wasn’t that bad, but I’d much rather do something I enjoy, such as giving tours and writing blogs. Oh, right, I’m supposed to talk about being an Arrival Assistant.

I walked into Saint Joseph’s auditorium and it was like a breath of fresh air. I was absolutely STOKED (pardon my slang) to see everyone again. A lot of my friends were also Arrival Assistants, so before the meeting started I was able to talk to everyone and begin catching up on all that I had missed over the summer.

In the meeting, led by Latisha Barnett and Rita McLaughlin, we were basically told what to look for, standard procedure, expectations of all arrival assistants and more things that escape me at the moment. Towards the tail end of the meeting, everyone participated in a little ice breaker.

The ice breaker we did was the one where you and a partner sit on the floor back to back, lock arms and attempt to stand up. Upon watching, you would think it was a piece of cake. However, it was actually a bit challenging.

When it was time to attempt it, I immediately noticed the height difference between my partner and myself and I knew this could be harder than I thought. Luckily for me, my partner (I believe her name was Heather, hi Heather!) knew what she was doing and I had prior experience with this activity and we absolutely SLAYED it.

After the little ice breaker, they put us into our groups and told us where we would be placed on the morning of first-year move-in. I was put in group #3 on the west side of Brubacher Hall. As brutal as the walk was from my house to Brubacher (it really wasn’t I’m just a baby), it was good because I am an Arrival Assistant veteran who was placed in the same area as the previous year. Shoutout to Group #3, you guys made this year so much fun so thank you!

Now, time to talk about the actual move in day. Thankfully, it was an absolute beautiful day. It wasn’t too hot, the sun was shining and most importantly, it was not raining. If it rained, I would have cried. I hate the rain, but I digress.

What was I saying? Oh yeah, beautiful day, right. It was just a great start of the day already, even though I was up at like 6:45am, but it’s fine. Immediately, I knew this would be an awesome day full of new friends, fresh faces, and did I mention how great the weather was?

My favorite thing about first-year move-in has to be cheering on those cars that are packed to absolute top. You never know what you’re going to get. Some cars honk their horns, some faces get red, some parents are SUPER into it which is my favorite reaction, or sometimes you’ll see the window slowly close, which is also hysterical. For those who do not know me, I am very loud so I’m sure you could hear me screaming.

I did have a really cool thing happen to me later in the day. As we were unpacking all the cars, I noticed Ben Marvin, one of the coolest dudes at Saint Rose, walking towards me accompanied by a man with a camera probably close to the size of my torso. I realize that might not be the best comparison because I’m pretty skinny, but whatever, you get the point.

Ben introduced me to the extremely nice gentleman, whose name was also Mike. Mike works for CBS Channel 6 news and he was looking to interview one of the Arrival Assistants about move-in day, what it means, how we prepared and he asked me to be the interviewee! Graciously, I accepted and was interviewed by CBS! 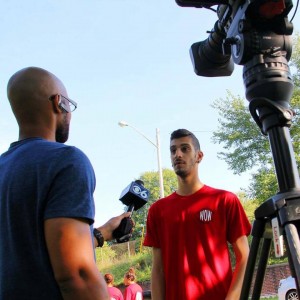 Awesome moment in front of a camera, on camera!

Honestly, I have no idea if it aired or not, but it was still a dream come true to be interviewed by a major television station. Over the past few years, I watched Courtney Carr, who has been an amazing influence on me, get interviewed a few times and it was just amazing that it was now my turn. It was truly humbling to be in front of that camera so thank you!

I also love first-year move-in day. I love being an Arrival Assistant. I love meeting new people and seeing some of the people who I’ve given tours to. Most importantly, I love giving back to the Saint Rose community that has been nothing but great to me. If you love lending a hand to your peers, becoming an Arrival Assistant is the way to go!

PS: Absolutely fantastic job by the Week of Welcome Team and Student Life for another excellent WoW!

← Making a Difference Around the Country
I Still Travel →