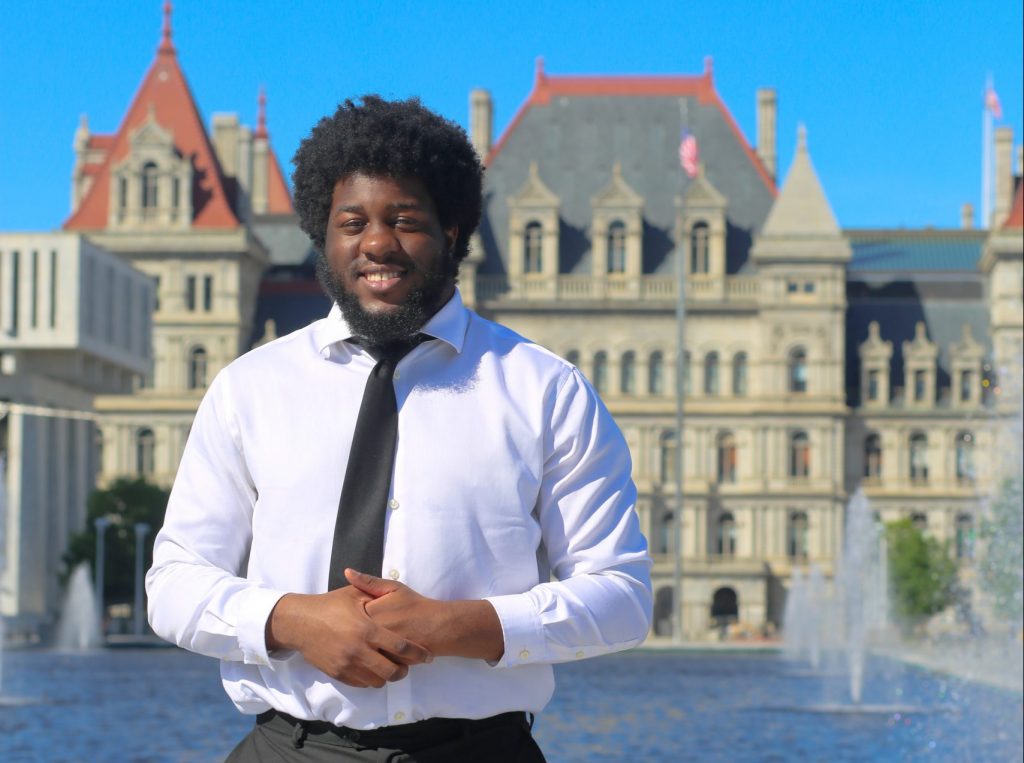 Mark Edem, a senior majoring in political science at Saint Rose, was one of only three students who had their research papers selected as Paper of the Year by the New York State Assembly Legislative Internship Program. (Photo by Todd Ferguson)

Each year, the New York State Assembly Legislative Internship Program names Paper of the Year award recipient for those interns who have authored exemplary research papers. Of 90 interns, only 11 are nominated. Saint Rose was proud to have two students recognized. Mark Edem, a political science major who will graduate in May 2022, was one of the three award recipients, and Brianna Casserly, a political science student who will graduate in December 2021, was among the 11 nominees.

Edem, an intern for Assemblymember Demond Meeks from the 137th District, wrote about raising taxes on New York’s highest earners in order to raise revenue for education, housing, and other public services while creating incentives for said high-earners to remain in New York.

“The paper also questioned how our understanding of democracy will dramatically evolve if we move towards a more progressive tax system,” Edem says.

Edem comes to Saint Rose from Lesotho, a country in the southern part of Africa, and says the research paper was evidence of his dedication to understanding the intricacies of New York, as well as American politics.

“I think it also suggests an interconnectedness across global political systems,” he says. “So while there may be nuances in American and Lesotho politics, they operate quite similarly.”

After graduation, Edem plans to eventually return to Lesotho and pursue political office.

“I feel that my time in the US has exposed me to the extremely polarizing nature of politics and the ways in which those differences can be peacefully mediated,” he says.

Casserly, who works with the office of Rep. Sarah Clark from the 136th District, wrote about her hometown of Rochester’s issues of police brutality and advocated for the passage of an Assembly bill related to banning the use of chemical agents against minors.

“The protests in Rochester following the murder of Daniel Prude inspired my work,” she says. “To be working with policymakers during such politically charged times inspires me to vocal about addressing issues of systemic racism and police brutality in 2021.”

← International educators connect with Saint Rose professor for career development
Meet Joelianice Feliciano ’22: Having internship experiences to get ready for the big game →