by Jane Gottlieb on January 7, 2014 in Good to Know, The College of Saint Rose · 0 Comments 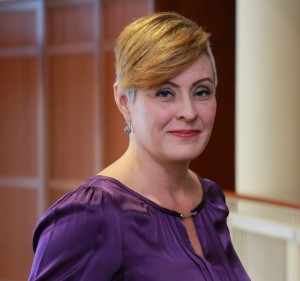 If New York taxpayers aren’t often proud of the way their state government operates, they do at least seem to revel in its notoriety.

“We feel our state is the most dysfunctional. But Texas and South Carolina are probably worse,” said Angela Ledford, an associate professor of political science at The College of Rose. “People always tend to believe their own state has the worst system.”

Ledford, a specialist in democratic theory, is likely to spend a good deal of time delving into the quirks of, and similarities among, state legislatures as the New York State Assembly’s new Professor in Residence. With the appointment, she becomes one of three professors who advise the 100-plus college interns who arrive each January for the start of the legislative session.

At Saint Rose, Ledford teaches contemporary political thought, American government and gender studies, a course load she will retain as she reports to Albany’s Legislative Office Building during spring semester to teach the weekly seminar. The paid appointment is open-ended.

It also is an exercise in democracy. If Ledford does not see New York lawmaking as the nation’s most unseemly, she has no intention of avoiding the scandals or backroom deals that regularly make the news. She was even asked in her Assembly interview how she might handle the less-flattering events in her teaching.

“They wouldn’t have hired me if they wanted a ‘yes man.’ I don’t think they would have had an academic. They would have had insiders,” said Ledford, a Texas native who earned her Ph.D. in political science from the University of South Carolina. “Scandal often surrounds power. For us, it becomes a teachable moment.”

Assembly interns fan out to lawmakers’ offices. The three scholars add the academic component. Also newly appointed is Janet Penksa, a visiting professor at the State University of New York at Buffalo who once served as fiscal secretary of the powerful Assembly Ways and Means Committee. Penska will supervise graduate-level interns. They join Dennis Smith, an associate professor of public policy at NYU’s Robert Wagner School of Public Service, with whom Ledford will share responsibility for the undergraduates.

As a political theorist, Ledford deals less with the mechanics of Albany lawmaking and more with the beliefs behind American democracy.  She is the author of Group Representation, Feminist Theory and the Promise of Justice (2012, Ashgate), which suggests electoral reforms to encourage political engagement. Ledford also provides media commentary on national politics, representation and elections.

“Most people in this post have a public policy background or are experts in political science or state government,” she noted prior to the start of the session. “I am like a political philosopher. I provide a broad understanding of democratic and competing democratic ideals.”

Among her goals is helping interns dissect the political rhetoric. For instance, she noted, President Obama’s healthcare law is often condemned as “socialist.” However, in socialism, she notes, the government would actually extend the coverage, rather than provide a mechanism for private insurers. Another loaded term, “pork barrel spending,” derides the practice of lawmakers funding small projects in their districts.

“There are two sides to the pork story,” she noted. “One person’s pork is another person’s constituent service.”

She also expects to explore the meaning of democracy in New York, where like other states the Electoral College and legislative gerrymandering blunt the voice of the individual. Wide-eyed students are likely to question why so many bills never make it to the floor of the Legislature even after the public has registered its support.

Ledford herself became a skeptic as a college student, when she took part in Texas Governor Ann Richards’ unsuccessful campaign for a second term. But she notes that government is nonetheless an agent for change.

“I don’t want the students to be jaded. I want them to be thoughtful and understand the way things actually work and how the successes can be replicated,” she said.