by Jane Gottlieb on July 11, 2016 in All About Saint Rose, Alumni, Faculty, Good to Know, The College of Saint Rose · 0 Comments

After 31 years on the Saint Rose English faculty, Hollis Seamon was retiring. So as classes were winding down and final papers being submitted, the professor also had many, many boxes to pack up and loads of old files to discard from her spacious office in Dolan Hall.

And as it happens, while Seamon’s academic career wound down, her career as an author seemed to be revving up. Over 25 years, she had won awards and earned good reviews for a novel, two short story collections and pieces in many magazines.Now, for the first time she had a literary hit, her comic-tragic novel “Somebody Up There Hates You.” 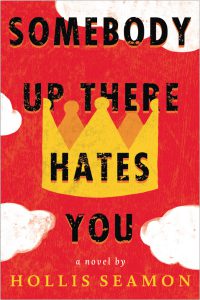 The 2013 chronicle of teenage love, unfolding in an adult hospice unit, SUTHY, as it is known, has been published in six languages in seven countries and was named a Kirkus Reviews “Best of Teen Fiction” pick. The novel appears under different titles and wrapped in various cover designs, in paperback and hardcover, depending on the country. It is classified young adult and adult. Nursing students at Fairfield University in Connecticut read it, as do “medical humanities” students at the Albany College of Pharmacy and Health Sciences.

And Seamon’s book has been wildly successful in France.

Shortly before completing her final semester at Saint Rose, she traveled to that country to sign books and speak at the University of Montaigne Bordeaux, where it is taught in an American literature class. The professor who teaches it even wrote a paper on the novel, with its carnival-esque take on death, which she presented at a literacy conference in Lisbon.

Seamon also agreed to make a video for a French bookstore delving into SUTHY and to be interviewed for TransAtlantic, a magazine devoted to culture and politics.

“The French cared deeply about the human aspects. They asked all kinds of great questions about the characters, just as if they were real people,” said the author, who earned her master’s degree in English from Saint Rose in 1986.

Seamon can only speculate on why decades after publishing her first short story this particular work hit. Critics say that SUTHY treats a difficult subject in a highly relatable way.

Regardless, at age 67, Seamon could not have scripted a more perfect next chapter for her own story. While the later-in-life acclaim was not expected – she said she sometimes feels like the grandmother of her fellow authors – the experience reflects something she has noticed. 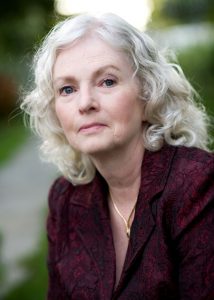 Published by Algonquin Young Readers and then by imprints in Europe, Canada and South America, SUTHY follows Richie and Sylvie, irreverent teens confined to hospice care with adults. Seamon based it on a short story she wrote, and she based that on the years she spent bringing her son to hospitals as he faced a serious illness. (He recovered.)

But after working on the book for three years and feeling good about it, Seamon was gun-shy about notifying her agent. She had had nothing accepted for four years.

“I put it off,” she said. “What do you say? ‘I haven’t been in touch for many years but here’s something else that’s never going to go anywhere.’”

Instead, the agent got back to Seamon in three days, suggesting edits that Seamon turned around quickly. Algonquin scooped it up, selling the rights to other imprints across the globe.

“I’ve never been published overseas. Never in different languages,” she said. “For once, I was in the right place at the right time.”

And as she was leaving her academic home, where she got her start as a writer and where she would miss the curiosity and humor of her students and the ongoing conversations about literature with colleagues in the English department, Seamon was also motivated by her strong finish.

“I’ve always wanted to get my stories and books out to the world and I wanted the literary success. And I’m definitely energized by the success of SUTHY,” she said. “Though I’ll still be doing what I always do, sitting in my room and playing with my imaginary friends. That’s what a fiction writer does.”