Good to know: Welcoming them home

by Jane Gottlieb on July 14, 2016 in All About Saint Rose, Good to Know, International, The College of Saint Rose · 0 Comments 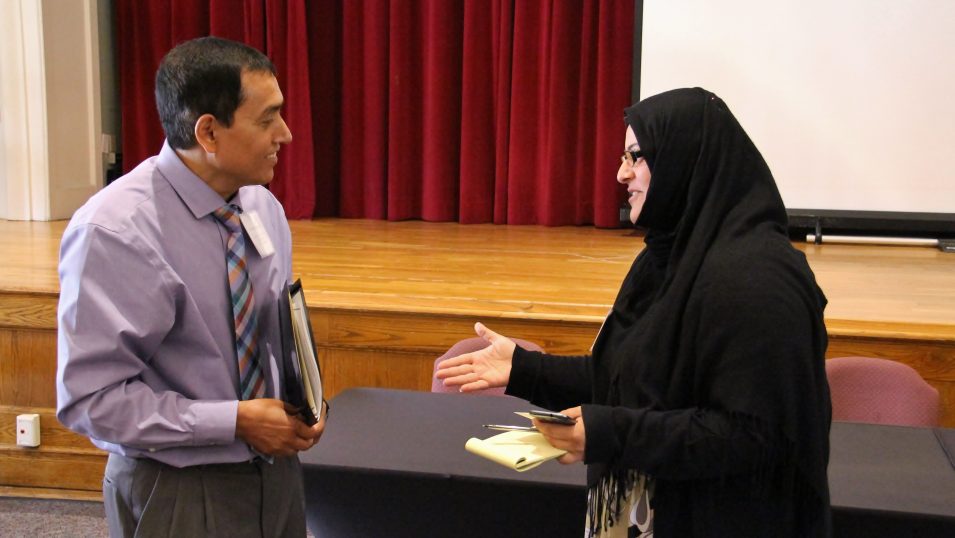 Chhabillal Timsina Sharma, left, a former refugee and now a psychiatrist who works with U.S. refugees, trades notes with a participant at EVER Changing World conference held recently at Saint Rose.

At home in Bhutan, a small country bordering India and China, Chhabilall Timsina Sharma was a doctor overseeing a network of public health facilities. But in the 1990s, his family and thousands more ethnic minorities fled to Nepal to escape intimidation and torture by the government. Sharma spent the next eight years treating individuals who, like himself, had lost everything.

He and his family are among the thousands of refugees each year who come to the United States to recover from emotional and physical trauma and perhaps thrive as new Americans.

“Some of us can make it and some of us may not, or we are just surviving,” said Sharma, now a psychiatrist in St. Paul, Minnesota, working with new immigrants from dozens of countries. “We make it because as human beings, there are two things we want: We want to live without pain and we want to live happily. As people we instinctively try for that.”

Sharma joined a host of experts from around the world who addressed the well-being of refugees and new immigrants at the EVER Changing World conference held earlier this month at Saint Rose. The fourth annual conference was sponsored by the Institute of Community Research and Training (ICRT), an interdisciplinary program at the College that addresses homelessness, mental illness and other social issues.

Previously held in the Netherlands, the two-day conference looked at strategies that have helped migrants successfully transition to new lives. Mental health counselors, social workers, doctors, academics and community organizers shared their experiences, challenges and results. And the conference, which Saint Rose students and recent graduates also attended, culminated in a consensus to continue on, by advocating for much-needed services in New York and beyond. 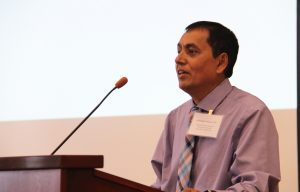 “The theme that emerged was ‘self-determination,’ that is we shouldn’t be telling people what to do but ask them how we can help them succeed,” said Richard Pulice, a Saint Rose social work professor and ICRT director.

After arriving in the U.S. in 2003, Sharma worked at a photo copy shop, in fast food and at a gas station before finding his way back to the medical track and the training he needed to become a psychiatrist.

Today, at the Health Partners Center for International Health in St. Paul, he uses a cross-cultural approach to his patients, non-native English speakers who have lost their homes and possessions along with their careers and social standing.

“Refugees are ordinary people with extraordinary stress,” Sharma explained. “They were people who were not accepted in their own countries because of ethnic, religious and political unrest and now they are here in a completely unfamiliar place. There is a saying out there that ‘USA’ stands for ‘you start again.’”

He noted that many people showing signs of depression and PTSD – normal responses to horrific experiences – avoid treatment because in their home countries “mental health” problems equate to insanity or out of control behavior.

To build a rapport, Sharma asks patients if they feel sad or tired, rather than using medical terminology. He then explains that there are doctors who can treat those symptoms – something people from less developed parts of the world might not be aware of.

He also finds that newly arrived immigrants are so focused on their children and older parents that they don’t consider their own health. And Sharma urged counselors and other caregivers to respect their patients’ non-Western beliefs about illness and healing.

“They may believe that witchcraft or bad karma or bad planetary positions are behind an ailment,” he said. “You might say, ‘By all means, believe that. Read the Quran or the Bible or whatever else you need to while we also try to help you out.’”

Sadly, Sharma has seen people who have survived torture and deprivation only to arrive in the U.S. and find that it does not live up to its reputation for instant prosperity. This was the reality in 2008, when persecuted and displaced people from his own native country, Bhutan, arrived in time for the worst recession in recent memory. The result: 58 committed suicide.

The economy has since improved as people from that part of the world have established a foothold here. There are now more than 85,000 Bhutanese in the U.S. and the emerging community in his region has begun to thrive.

“I always want people to know that their lives may look like just losses,” Sharma said of the people he meets on their arrival to American soil. “But they must have something inherent. We have to bring it out. They have already survived so many different things.” 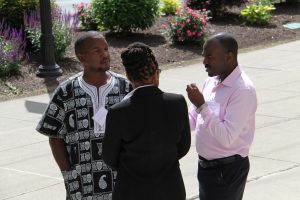