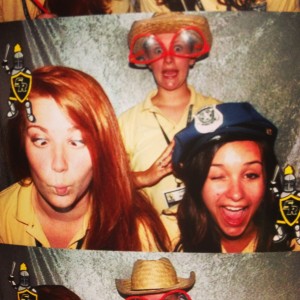 Myself, OL Carly, and OL Allyssa having fun in the photo booth

After orientation last year I decided to “re-enlist” for orientation 2014 and promptly applied once applications were made available in January. Thankfully, I was one of 14 students chosen for this year’s orientation and eagerly stepped up to the plate. Nothing is more exciting than being handed a list of names on day one, none of whom you know, and getting close to a group of students over the next 30 hours. Yes, sometimes making the group open up to you is challenging but that is also part of the fun. After those 30 hours you see them become part of the Saint Rose community and see them begin to picture themselves on campus in fall.

Aside from working with the students my month in the orientation house was filled with adventures to swimming pools, trampoline parks, and even to my home state of MA one night to shop at the outlets.

The past two years have given me a chance to rediscover why I fell in love with Saint Rose through my student’s eyes because only three years ago I was in their same position. Now that I am a senior watching them get excited about the upcoming year brings back the memories of my own move in day and about making my first college friends. At a time when my time on campus is coming to end I can not help but get caught up in the class of 2018’s dreams for the next chapter of their lives.

← Good to know: Getting beyond the mystery of mystics
So Close To Saying Goodbye! →