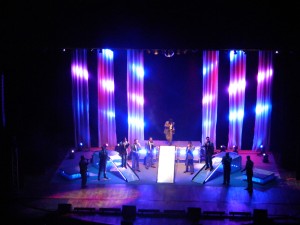 The A Capella group Straight No Chaser performing "Billie Jean/Poison". Photo taken by me!

No, this is not a post about the alcoholic beverage. This is an a capella group that is nationally renowned and beloved! On Thursday, October 25th, I went with The Golden Notes (the mixed a capella group on campus) and The Other Guys (the all male a capella group on campus) to see Straight No Chaser at The Palace Theater! It was such a great show filled with great music, entertainment, and such fun! I’m mainly going to be posting videos of the concert on here, because music speaks louder than words. And don’t worry, they said specifically to tape them, so there’s no copyright infringement 🙂

The show opened with classic songs such as “I’m Yours/Somewhere Over the Rainbow”, “Signed, Sealed, Delivered”, and my personal favorite, “Fix You.” The video below is me taping them singing.

Straight No Chaser became famous thanks to their Christmas Songs! They have two Christmas albums that are AMAZING (I listen to them all during the christmas season). This first song is their “12 Days of Christmas”, a fun arrangement of a classic song! (this video was NOT taken the night I saw it, the video wouldn’t upload from when I saw it 🙁

The other Christmas song that they performed that I loved was their rendition of “You’re a Mean One, Mr. Grinch”. Just listen to me exclaim my love of the basses!! THEY’RE SO INTENSE <3 (this video is ALSO not from that night because the video was being dumb).

They closed the show with some fun medley’s of pop culture songs, a movie theme medley, (I can’t embed the movie but click the link and you can see it!), and a classic, “Stand By Me.” They were fabulous and I absolutely love them. 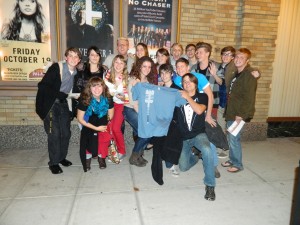 Members of the Golden Notes and The Other Guys in front of the Straight No Chaser poster! <3

Overall it was a great experience filled with great music, fun, and friends! Check out Straight No Chaser and Saint Rose’s other A Capella groups!!! 🙂