SycAmour and Brightwell at Bogies 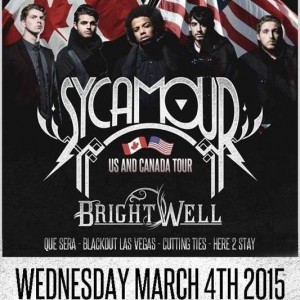 An ad flyer for the show

On Wednesday, March 4, I went to Bogies on Ontario Street, behind Madison’s Pizza, for one of the best shows ever!!!  It was a lineup of up-and-comers in the metalcore scene along with several local openers.  SycAmour was headlining the show, and leading up to them was Brightwell, Que Sera, Blackout Las Vegas, Cutting Ties and Here 2 Stay.

Here 2 Stay started the show heavy, and I mean HEAVY!!!  This five-piece NY deathcore group were easily the loudest band on the lineup, even with a guitarist missing!  The crowd at Bogies usually needs a little warming up and these guys were the right sound to get everyone amped up for the rest of the night.

Then went on Cutting Ties, and they were definitely somethin’ else on stage!  Their songs were constantly changing time signatures, which is hard to dance to but very interesting to hear.  I got to talking with vocalist Pat Elliot after the set and not only found that he had just recently taken on the role of both clean vocals and screams for the band, but that I had met him at a show once before in Clifton Park at Upstate Concert Hall!  I gotta say, New York State is a small world, haha!

Blackout Las Vegas was the reason I even went to this show.  If the name sounds familiar, that may be because two of the members are actually Saint Rose students: Tyler Gereau on drums and Derick Noetzel on bass!  I actually bought the ticket from Tyler just hours before the show and I’m so glad I did!  The energy they brought to the stage with their ADTR-esque vibe was just what I was looking for!  People got jumping and moving and having a great time just sharing the music together.  That’s what this scene is all about: good times and great music! 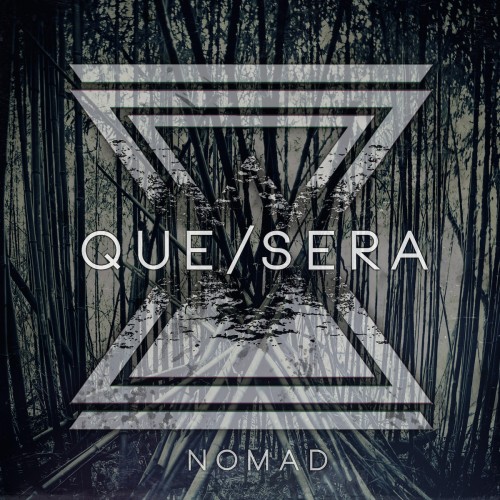 Following them were the signed acts on the package starting with some new faces in the progressive post-hardcore world, Que Sera.  Of what I could make out, they were playing some really intricate stuff!  Unfortunately, the stage sound at Bogies tends to be too much for the speakers to handle, so I couldn’t make a lot of it out.  But the fans who knew them before the show could still get into it!  The biggest fan I saw was actually the bassist from Cutting Ties.  He was up along the front of the stage singing all the lyrics right back to the singer!  I wish I could have heard them more clearly, but I grabbed a copy of “Nomad,” their debut full-length album, so now I’ll have the chance to!

Up next was Brightwell, and I was so pumped!  My buddy Tyler from BLV was hyping them ever since he first mentioned the show to me sometime last month.  After Que Sera’s set my ears had better adjusted to the audio levels, so I could actually kind of hear these guys!  They were fantastic on-stage and better yet they were great people off-stage!  Their EP “Alpha” just came out this year, and their music video for “Scripts” was released that day exclusively through Alternative Press Magazine! 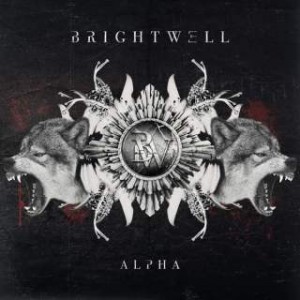 Last, but most definitely not least, we have SycAmour, who was promoting their new release “Indulgence: A Saga of Lights.”  Let me tell you, these guys earned their headlining spot on the tour!  Unfortunately, due to this headliner status, their set was late at night so most of the crowd had already left.  Thankfully there was enough of us there to get a little pit going!  I had the luck of getting to talk to the bassist, Charlie McCormick, before Que Sera went on.  He was such a great guy!  We were just there at the merch table talking about music and the show and whatever else!

After their set I caught up with Charlie again to congratulate him and the band on a great show.  Not only did he thank me but he invited me to hang out with him, the rest of SycAmour and all of Brightwell on their tour bus!!!  I’ve heard all kinds of stories from friends who’ve gotten to hang out with touring bands but I had never actually gotten the chance myself!  It was a great time just relaxing and talking with him all these awesome people who I just watched on stage, getting to see a small glimpse of who they really were: a big group of friends who get to travel and make music together.  So, I’d like to say thank you to all the guys in both bands for making that night truly memorable.  I can’t wait to see you next time you come through New York!!!