The Name You Create 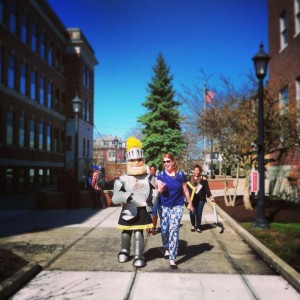 Just Fear and I enjoying a nice stroll- also this is actually not staged, just a day in my life.

This semester I ran for Student Association, after much convincing by my friends, and won the student election for Director of Communications. Student Association is our student government at Saint Rose and oversees 30+ clubs and organizations.

I was heavily involved in SA my freshmen year and even over the summer when I was working on a campus wide committee. This year I found myself juggling too much to stay involved. I took a step back from SA but noticed that I missed it in my life– especially since SA kept me up to date on all the happenings around campus. Once election time rolled around my friends kept telling me I should run and finally after a couple of weeks of them telling me I decided to listen. I attended an interest meeting and heard of all the positions one could run for. As soon as I heard of Director of Communications I was hooked and felt like I needed to put myself out there and run. The job description for this position read like my resume and included everything that I love to do for a school that I equally love. I launched my campaign shortly after and in two days already had 100 likes on the Facebook page I created to get my name out there. I even had people I had never spoke to like it and then share it for their friends to see.

I was honestly shocked at the amount of support that seemed to becoming out of nowhere, until I realized the name I have created for myself at the college. I was not just Courtney Carr– to people around campus I learned that I am Courtney Carr the girl  that works in PR, is a tour guide, an officer for environmental club, a staff writer for The Chronicle (our student newspaper), the resident assistant that moved 3 times, a future orientation leader, the girl that made those embarrassing but awesome Crib Videos, and of course the girl that blogs for the college. I never realized how people saw me around campus until I was running for this position and that made me want it so much more.

If you asked me when I was in high school if I ever saw myself in all these leadership positions, I would probably only say I wanted a couple– and never saw myself on the board of my college’s student government. But this speaks to all the opportunities that are available at Saint Rose as long as you put yourself out there. Yes, sometimes I feel like I can not breathe because of everything that I have going on, but I would not have it any other way. I enjoy being involved and having a say in what goes on at The College of Saint Rose and because of this I have so many wonderful ideas to bring to the table as  Director of Communications. I highly encourage students to get involved on campus whether it be through SA or through any other of the countless clubs on campus because it really does matter. Joining clubs and activities on campus not only yields friends and experience, but also allows others to see the type of person you are and thus what you are capable of.

← The Saint Rose Camerata, Guest Starring Elvis!!!
An Old-Fashioned Battle of the Bands →