Life as a “Commuter” Student: The Drive

When I first got my driver’s license I never imagined that I would feel bored driving.  The feeling of being in control of the vehicle out on your own for the first time is incredibly liberating!  But when you start to drive several hours along the same route home and back, you lose that feeling of freedom.  Rather, the car feels like a box that you must make go from one place to another repetitively.  It grows very lackluster.

I commute from Cambridge, NY at least twice a week.  This is about an hour and a half drive each time, and has only gotten longer due to the snowfall.  I have to take my speed down a couple notches this winter.  Twice a week, every week all semester, these hours trapped in a fast-paced box rack up. 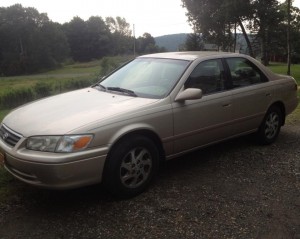 This is it: my old, boring car

Throughout these countless hours, I like to plug my iPod into my cassette adapter that I need because I drive a 2000 Camry.  Normally it works great!  However, I’ve recently suffered from a grave misfortune: the headphone jack on my iPod broke. Unfortunately, it was an iPod Classic, 160 GB, and Apple went and discontinued it on me.  To overcome the struggle, I had to resort to using CDs.  Not the worst thing in the world, I know, but it’s a serious bummer!

I really do appreciate that I have a place to stay in Albany during the week.  If I had to make that drive every day I don’t know what I would do, especially with my recently limited soundtrack!  I’ve got to give some credit to the students who actually do that commute every day: props to you guys!

It’s not all bad though.  There are times when I get to drive around with friends, too!  It’s usually just to run them to work, or to go grocery shopping, do laundry and other stuff like that, but it’s time with people.  It makes my moving box a little more bearable.  And the alone time can sometimes be a blessing when I need to clear my head.  It allows me to focus entirely on my safety and driving, leaving all the stresses of upcoming finals and life in general tucked way in the back.  Sure they don’t go away forever but it’s a nice break; and sometimes, if I’m lucky, the thoughts sort themselves out miraculously just by leaving them alone.

Well, that’s about all I have to say about driving.  Take it for whatever it’s worth, haha!